SLUG Mag Soundwaves
Episode #403 – Mykah
00:00 / 21:59
Spotify Stitcher
RSS Feed
Share
Link
Embed
What do superheroes eat after a hard day of do-gooding? Shawarma, of course. If you saw Joss Whedon’s latest movie, The Avengers, and you stayed for the second, post-credit end scene, you know what I’m talking about. Where do the local superheroes get a genuine shawarma in our little home of vice and virtue? Well, there is only one answer: Curry Fried Chicken. 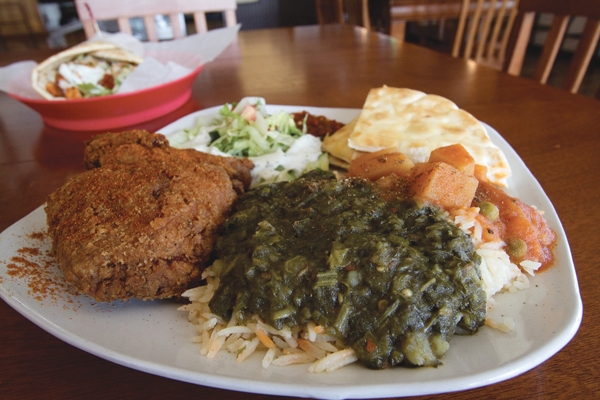 What do superheroes eat after a hard day of do-gooding? Shawarma, of course. If you saw Joss Whedon’s latest movie, The Avengers, and you stayed for the second, post-credit end scene (it’s on YouTube), you know what I’m talking about. Where do the local superheroes get a genuine shawarma in our little home of vice and virtue? Well, there is only one answer: the new shawarma joint called Curry Fried Chicken.

Of course, they make curry fried chicken, too, which is a great public service in itself. If the world has to be divided between Chick-Fil-A and Kentucky Fried Chicken, then I just don’t want to get my chicken fried anymore.

Housed in a smallish building on State Street next to Big Deluxe Tattoo, you can sit inside at the counter and watch while your food is being prepared, or at the window and see the traffic rolling down State Street, or outdoors on a pleasant, little patio. Curry Fried Chicken is a cousin, I suppose, of the fine Curry In A Hurry family. The place is a real ma n’ pa business run by a young couple. They are both very nice and take alternate shifts providing fine food and a clean kitchen. Their young daughter was at the counter, studying, several of the times I dropped by.

The reason I came to eat here in the first place was because of some shawarma advice from Jeff Vice, the do-gooder, film critic and premier of that local cult, The Geek Show podcast. It was a favorite new place of his because the curry fried chicken was really good. Call me suggestible, but after seeing The Avengers, I realized the only thing in the film I could do like those guys was eat a pita sandwich (and I wanted one).

So, throw in the fact that Curry Fried Chicken makes a shawarma ($6.49), the deal was sealed. So, what is shawarma, you say? Here, it is as big a pita as I have ever seen, sauced generously with a tzatziki-style yogurt and spicy pepper, filled with lettuce, cucumbers and a changing cast of the other, usual vegetable suspects. All of these are arranged to celebrate strips of juicy roast chicken. The flavors are good, light summer fare. Yogurt, like vinegar, is a bracing flavor. Used with skill, it can create a first-food-experience you never forget. I grew up an average American kid, and the first few times I got a mouthful of flavor from a messy gyro or cool Indian raita on a hot curry, my head turned clean around.

The Fish Wrap ($6.49) is a variation for you pescatarian friends, or for you Friday Catholics (you know who you are). With this fried white fish, you get the same broad, tasty pita and similar sauces, and it is every bit as fine a dine as the shawarma. The fish is deep oil-fried in a light layer of lentil flour in a separate pan from the chicken, which is cooked up in a drop fryer. This segregation keeps those with food rules happy, and, importantly, keeps the fried chicken un-fished.

The highlight of the menu is the Curry Fried Chicken (Plate, $9.99, Piece, $1.49), which is simply unique. It takes more than a few minutes to make, so don’t wear your “where’s the fast food, I gotta go now” pants, or you’ll get them in a knot. Even though the fried chicken is available in individual pieces, it is better as one of the dinner options. It’s a whole meal, unlike the wraps, which are à la carte. The chicken is tender and flavorful, and when you finish, you suddenly notice that your mouth is quite hot—but you don’t notice while eating it. Neat trick. I don’t eat fried chicken very often, but this is pretty awesome. Chicken fingers don’t compare. This is fried chicken you haven’t had before. The spices are romantic and old-world.

The dinners come with a side of what the menu calls Super Basmati Rice (a side, $1.99), which isn’t too misleading. Sharing the plate is a chopped vegetable salad beside some light curry of potato or other carb. The sides are worth the time to savor. Each time I got a dinner here, I looked forward to seeing what extras would be on the plate that day. They were always different, and always considerable.

Hummus ($1.99) is a barometer for the sensibility of any kitchen that takes the trouble to make it. The hummus here is sharply flavored, but not garlicky. It appeared at the table as an island of sunbleached yellow with a generous drizzle of leaf-colored oil. A bit more pita would be nice, though, because I hate to have to ask for more bread.

Of all the items on the menu, only the Chicken Keema Kabob plate ($9.99) didn’t beat my expectations. A service of minced chicken and spice made into patties, fried and served with pita, it passed me by, like Stallone, or Scrubs.

Curry Fried Chicken. Call it an oasis in this hamburger and french-fry desert state, or a phone booth for your foodie superhero. Just know, when you need it, you can get there. Be ready to come away topped up with good food, wholesome and handmade. Renewed, you may continue now, on your journey to greatness.