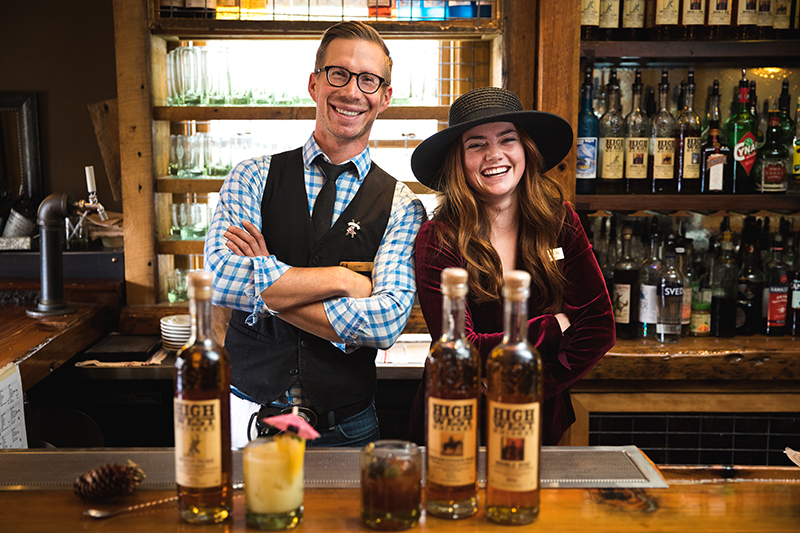 Park City’s downtown boasts fresh powder that invites skiers and snowboarders through winter, while innovation in craft spirits weaves a deeper story of this mountainside haven. Two craft distilleries have become part of the vibe of this world-renowned destination. High West paved the way for Utah spirits to be recognized globally, and now with relative newcomer Alpine Distilling (at SLUG Mag’s Brewstillery, Nov. 17, at Union Event Center), both are providing nostalgic experiences that draw in locals and visitors alike.

High West is a Park City staple. They carved the path for other distilleries by lobbying for the ability to sell alcohol on Sunday and to sell their spirits from their own store. In 2006, High West became Utah’s first legal distillery since 1870. Founders David Perkins and Jane Perkins had an epiphany while visiting Maker’s Mark in Kentucky, and a new whiskey company was put into production in Park City. Starting out blending, a lot has happened since its humble beginnings.

Having earned the respect of many bartenders, the spirit is a staple in many bars across the country and locally. Bartenders on staff at the P.C. Saloon get together a few times a year to craft new cocktails and work on creations that visitors will fall in love with. I sat at the Saloon bar to enjoy a burger and cocktail. I tasted the Little Hollywood, which includes guava with double rye and is incredibly worthy of a sunshining day. Its strawberry-and-pear-like taste counterbalances its spicy-rye whiskey kick. Initially, I was wary of guava plus double rye, yet it was both pretty and scrumptious in its tiki elegance. High West’s  most recognized whiskeys include: American Prairie Bourbon, Double Rye, Rendezvous Rye and Campfire, a nice smoky blend of scotch, whiskey and bourbon. Their seasonal release of “A Midwinter’s Night Dream”, is a variant of the Rendezvous finished in French oak port barrels,  was being released the day after I was in Park City. I love the name of another seasonal, Yippee Ki-Yay, which is rye whiskey aged in wine barrels and is available for  purchase year-round in their shop.

High West is expanding their operation. With their spirits in demand, they are adding an additional still at their Wanship location. Their whiskeys are now in all 50 states, and having penetrated the major markets such as New York, San Francisco and Chicago, they are looking align with smaller markets spreading their craft whiskey love. Their distillers are constantly playing with new flavor ideas, and they could not share what may be coming next in terms of whiskey. However, High West is also launching a beer. The American Standard lager, a pre-Prohibition-style lager has a nice spiced finish from aging in bourbon barrels. It is a nice, everyday lager made with corn rye and barley that will be a good edition to the High West selection. Perkins has worked with Ballast Point in creating their newest craft.