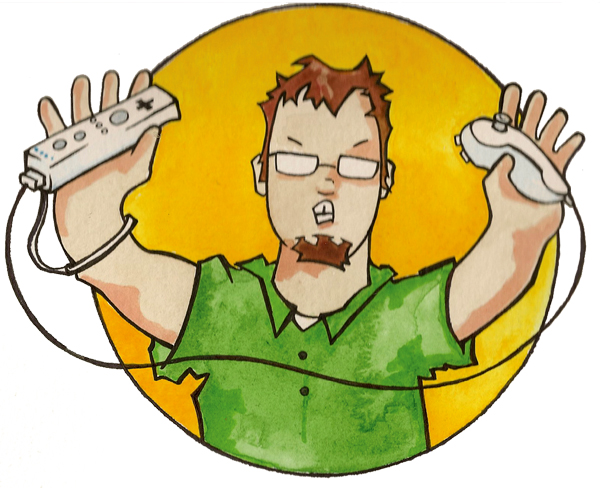 Roger Altizer has a job that’s so cool you probably haven’t even thought to wish for it.  While pursuing his PhD at the U of U, Altizer has proposed and implemented the University’s first gaming classes. That’s right, this enviable fella is actually a professor of video games.  The U has been offering Altizer’s video game classes since 2005.  This year there are three and the students in the senior capstone course ultimately produce a video game that becomes available in Xbox LIVE’s community game forum.  It’s not all computer science—Altizer’s classes also study video games critically, much like dissecting the intricacies of literature or film.  ‘Videogame studies’ is not an oxymoron, friends.  At least, not any more.  “There was a little backlash,” Altizer says of the video games’ incorporation into academia.  “Games are perceived as a toy, a children’s thing— which, of course, often they are—and because they don’t have the artistic respect and they don’t have the history, they’re far more open to critique.”

In the past, games have been a pretty easy source for a bit of fire and brimstone from the national press, but Altizer shrugs off the prosaic critiques.  “People have been studying the effects of media since the dawn of time and no one’s been able to prove that even watching T.V. causes violence.” He says, “Look at countries like Japan that have just massive violent and sexual media consumption,” yet the country’s crime rates are famously low.

As gaming is gradually recognized as a viable artistic medium, public opinion stands to change.  When Altizer began his career as a gaming professor, there were only a handful of traditional universities offering gaming courses.  Today gamecareerguide.com lists almost 500 institutions offering gaming education.  Our fair city is on the map too: “Salt Lake City is actually really exploding,” Altizer says.  “Depending on who you ask, we’re somewhere around the number ten city in terms of game development right now.”  Disney, EA, and Sony have studios in and around the valley.  “[We have] a host of indie studios, too,” Altizer says.  “There’s lots of growth here, it’s exciting to see. My dream is that a lot of these kids are going to go and make their own indie studios in town. To get a cool indie gaming community here in Salt Lake would be rad.”  Amen to that, Mr. Altizer.

It looks like the gaming industry is beginning to get the credit and consideration it deserves. “There is no excuse to not study what may become the most important cultural and artistic development of the new millennium,” Altizer says, and there’s plenty of room for growth.  As a relatively young expressive medium, video games are constantly progressing and being reimagined with every new leap in technology.  So what can we expect in the future? Will I plug World of Warcraft directly into my eyeball? Will graphics ever be indiscernible from reality? Well, I’m glad you’ve asked because there’s an expert right here:

“If I see gaming going anywhere in the future, it’s away from physical media,” Altizer says. With concepts like OnLive already revealed, this evolution isn’t far off. “Rather than seeing traditional games miniaturized, we’ll see mobile devices allow for new types of gaming . . . more ubiquitous gaming.  That is, games on devices that don’t typically have games. So instead of playing WoW on the road, we’ll see games that are designed to work with mobile devices that might involve reality . . . non-traditional locations and altered states,” Altizer says.

Sounds trippy, but your average hardcore gamer might not take so kindly to the thought of his iPhone as the future of gaming.  Never fear, Sir Fragsalot, uncanny valley is here!  Or, at least, according to Professor Altizer, it’s on its way.  “I think that day will come,” says Altizer of indiscernible graphical realism, “but it’s an interesting question to me . . . because the obsession with hyperrealism is an American phenomenon.  We love really real looking games.  But if you look at Japanese games for example, they’re really stylized, right? If you look at European games, same thing. The obsession with making things look real,” Altizer says, comes from film.  “People want to make games look like movies . . . to be running around shooting people that look like real people—I don’t know if that’s a lofty goal or not, but I understand the desire.  I think part of overcoming uncanny valley is to stop aiming for reality and start aiming for what triggers the right emotions in the mind—the hyperreal.”

“If I see gaming going anywhere in the future, it’s away from physical media.”

The awesomeness will come at a price: “If EA’s willing to experiment with micro-transactions on games you paid $60 for [Ahem: Madden], I wouldn’t be surprised to see loading screens with commercials.  As long as [tomorrow’s games] put in a script that allows them to upload whichever ad is new, it becomes a service,” says Altizer. Gotta love marketing.  But for every Madden NFL 10, there’s an indie development studio offering something beautiful like Braid.  For every blockbuster movie with a licensed (crap) game there’s a professor like Roger Altizer helping video games take firm root in academia as a medium that is rich, expressive and undeniably valuable.