In 1980s Los Angeles, Tony Quan, aka Tempt One, was one of the pioneers of a distinct LA graffiti style. But in 2003, Tempt was diagnosed with ALS, aka Lou Gehrig’s Disease, which left him almost completely paralyzed, unable to eat, breathe or even speak on his own—writing graffiti was obviously out of the question.

Getting Back Up: Tempt One Writes Again 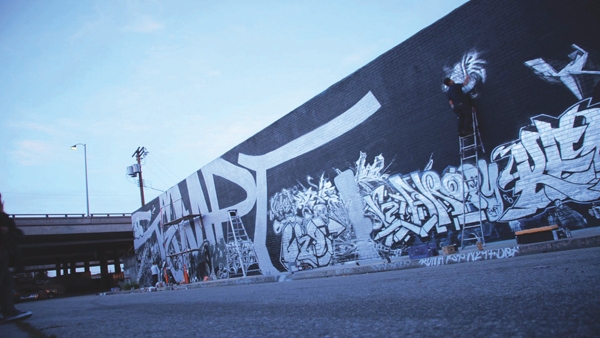 Back in the adolescent days of hip hop, Tony Quan, aka Tempt One, was getting up like nobody’s business. In 1980s Los Angeles, Tempt was one of the pioneers of a distinct LA graffiti style and has since become a street art luminary, fostering California’s underground art community. According to the Not Impossible Foundation, “In his 25-year career, he has curated art shows, spoken at the United Nations and created an international publication on street and urban art.” But in 2003, Tempt was diagnosed with ALS, aka Lou Gehrig’s Disease, which left him almost completely paralyzed, unable to eat, breathe or even speak on his own—writing graffiti was obviously out of the question.

Fast forward to 2007: Caskey Ebeling, filmmaker and partner at The Ebeling Group (a production company run with her husband Mick Ebeling), found herself at Represent, Represent!, a benefit art show for Tempt One with a hundred graffiti artists. An artist herself, Caskey was struck by Tempt’s situation: “What would it feel like to be an artist … and you can’t do what you love?” she asked. The Ebelings were determined to help Tempt in any way they could. Their involvement with Tempt would eventually be made into Caskey’s newest film project, Getting Up, which is set to premiere in the documentary feature category of 2012’s Slamdance Film Festival.

After donating to the Quan family and tirelessly working the system trying to get the medical equipment needed for Quan to be able to communicate with his family, Mick Ebeling secured a MyTobii for Tempt. The MyTobii is a gaze-controlled communication device, which allows people with little to no mobility to type and navigate the Internet, using only their eye movements. Up until then, Quan was unable to communicate much at all, having spent the last four years using his eyes or jaw to answer “yes” or “no.” But even after this huge breakthrough for Tempt, Mick Ebeling still didn’t think it was enough for the street art legend. “For Mick to step in as an outsider … his natural instinct was to go outside of the medical community because he doesn’t know the medical community at all. He went through the system to get the MyTobii, but when he realized that the medical community and the MyTobii weren’t really focused on art, he knew he needed to think outside of the box,” says Caskey.

The Ebelings found their out-of-the-box solution from none other than a bunch of graffiti writers and underground software developers. While giving a talk on green film production, Mick met a member of the Graffiti Research Lab, a collective of artists and hackers from around the world who are committed to the progression of street art through technological innovation. The GRL is dedicated to outfitting graffiti artists and activists with open source tools for urban communication and boasts projects such as laser-guided skyscraper-sized graffiti projections they call Laser Tag. With the help of the GRL, Mick was able to figure out a way to help Tempt write again. The Ebelings brought members of this underground brain trust into their Southern California home, giving them a headquarters to begin developing a device that would allow Tempt to draw with his eyes from his hospital bed. The GRL guys were committed to building a device out of parts that anyone could obtain, run with software that anyone could access and be made as inexpensively as possible. Working with Mick, they ended up connecting a Playstation 3 webcam to DIY hardware from Home Depot, mounting the device on a pair of cheap sunglasses purchased on the Venice Boardwalk and running it all through eye movement-tracking software they created themselves. They dubbed the device the EyeWriter, and it was the first piece of equipment of its kind.

The DIY attitude of the GRL and The Ebeling Group is shared with Slamdance’s president and co-founder Peter Baxter. Started in 1995, Slamdance began as a showcase for films that were rejected from Sundance. Left unsatisfied by the mainstream, Baxter and fellow independent filmmakers started their own festival. “A lot of the films that were beginning to play at Sundance at that time had already got distribution, were already tied with studio deals, had already got a lot going for them coming into the festival … We had nothing going for ourselves coming into Slamdance. We didn’t really know anyone. All of these films were really coming from the underground,” says Baxter. Slamdance is still run, as Baxter says, “by filmmakers, for filmmakers,” providing the perfect venue for Getting Up.

Although a seasoned director of avant-garde commercial work and acclaimed narrative short films including Monster Slayer and the Slamdance-premiered The Package, the ongoing archiving of Quan’s story was Caskey’s first venture into the documentary genre. Referring to her typical film style, she says, “I normally do very strange, weird stuff. This film just sort of fell into my home … We started filming when Mick and I started helping create the EyeWriter.”  Creating a documentary required a shift in her artistic approach: “With the documentary, it’s not about my voice—it’s about the story’s voice,” says Caskey. As one who grew up immersed in the artistic community and familiar with graffiti culture, Caskey understood the motives behind the GRL and their quest to let Tempt write graffiti again. She had to tell the story in a way that outsiders could relate to. “How can I be respectful and show the rest of the world about the community and the humanity of the art and the culture?” Caskey asked herself when she began production of the footage that would evolve into the film Getting Up.

In 2010, after being unable to draw since he was diagnosed with ALS, Tempt One wrote graffiti for the first time in seven years. Wearing the EyeWriter, Quan was able to write the word “Tempt” on a computer screen, line by line, by simply moving his eyes. “That was the first time I’ve drawn anything in seven years. I feel like I had been held under water, and someone finally reached down, and pulled my head up so I could take a breath,” says Quan, as quoted in Mick Ebeling’s TED Talk about the EyeWriter project. Although rudimentary compared to the intricate pieces that made him a graffiti legend, these first scrawls after seven years of artistic silence were monumental. “In the film, that’s sort of the highlight. When he gets back up,” says Caskey. Soon, GRL was able to link Tempt’s EyeWriter with their Laser Tag setup, which projects gigantic virtual tags onto whatever surface they choose to point it at. Although still confined to a hospital bed, Tempt is able to make his art anywhere in the world in real time. “So Tempt gets up using Laser Tag … If a GRL volunteer contacts him and says, ‘At this date and time I’m gonna put you on the Taj Mahal, or on a pyramid, or …  on the leaning tower of Pisa,’ anyone who decides they want to help him, he can draw from his hospital bed, anywhere,” says Caskey. Even though the EyeWriter is strictly a drawing device and can’t do what the MyTobii can do, Caskey says their DIY efforts will definitely promote evolution in medical technology: “These two worlds [the establishment and DIY], as always, work hand in hand. I don’t doubt that because of what the GRL and the Not Impossible Foundation has been able to do and what we’ve started together … that the medical industry has been influenced. I don’t doubt it at all.”

Although the subject of Getting Up focuses on an underground art form and artistic liberation, the story has a definite message: Anything is possible. In the words of Tempt himself from eyewriter.org, “Art is a tool of empowerment and social change, and I consider myself blessed to be able to create and use my work to promote health reform, bring awareness about ALS and help others.” This attitude manifested itself during the making of Getting Up when Caskey and Mick Ebeling started the Not Impossible Foundation, in order to help tackle future projects like the EyeWriter. Caskey says, “We thought ‘Ok, we need an overarching thing that explains what kind of projects we want to work with … We just decided we would create the Not Impossible Foundation, which is about taking ordinary problems, matching them with extraordinary people, and sharing it with everybody. Everyone can contribute.” Caskey says she plans to document future projects that the Not Impossible Project takes on and shares some insight she gained after seeing Quan get back up: “My kids now know, for real, that you can make change in the world. It’s not a concept, it’s a reality.”

You can peep Getting Up at this year’s Slamdance Film Festival, running from Jan. 20 to 26. Find out more info about the films at Slamdance by visiting slamdance.com. To learn more about Tempt One’s story, see the EyeWriter videos for yourself and find out how to build your own, visit notimpossiblefoundation.org and eyewriter.org.