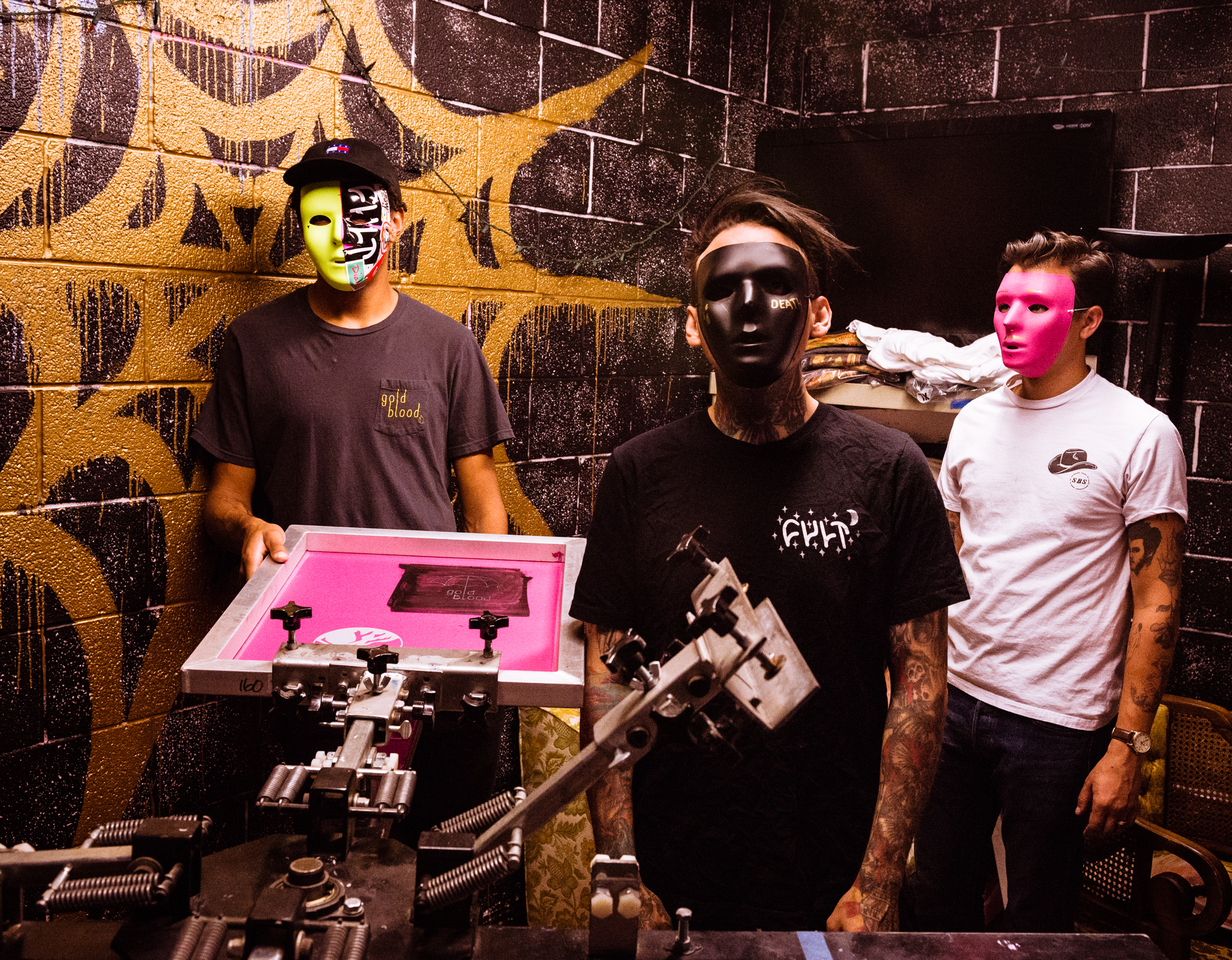 The Goldblood Collective: DIY Advocates and Screen-Printing Wizards Putting SLC on the Map

On a dingy block on South State Street, nestled between two nondescript businesses, sits Goldblood Collective, the multi-faceted business and love child of three local kids with ideas, drive and a passion for music and clothing.

“We got the spot, and we kind of said, ‘Now what do we do?’” says Windsor. It’s Saturday morning, and Windsor and Ledesma sit in the collective on mismatched furniture by the entranceway. Several freshly printed t-shirts hang in the corner of the room, sporting sleek, minimal designs and logos. A PA system stands at the opposite wall with music lightly playing in the background. They had a show the night before, and remnants of it can be seen throughout the room.

“I know what it’s like to be a touring band and not know where to play a show,” Ledesma says, describing how the collective changed from a shop to more of a venue. “We want to give bands an opportunity to at least make enough money to get to the next city on their tour.”

In any way it can, the collective now works to help support artists and musicians who find themselves in Salt Lake City or who call the city their home. Armed with a screen printer in the back of the shop, they design t-shirts at a discounted rate for artists and bands to help them get on their feet and have their brand recognized.

The collective also works with other DIY spots such as Diabolical Records, collaborating and sharing calendars, working together diligently to make sure that musicians get a chance to play their music somewhere. “We work with Adam Tye from Diabolical a lot,” says Windsor. “If he gets double-booked, we will take one of his bands, and he will do the same for us.”

The dedication that Evans, Windsor and Ledesma have for what they do is astonishing. The three opened up their shop with no outside help, often struggling to pay rent and keep their doors open. Still, they do what they can, driving Uber and Lyft some weeks to make ends meet. To them, that’s the price they have to pay to keep and maintain what they see as a vital part of the community.

“There’s been times where we host a show and only make, like, $20 in donations,” Ledesma says. “We just give it all to the band. We want to make it worth it to them, at least a little bit. Maybe they can take the $20 and go get something to eat.”

One way that the Goldblood Collective stands out is it gives local new-school rap artists a spot to perform. In a city where a majority of underground music is rock-based, rappers of the SoundCloud variety are given a chance at the collective to try out their sounds and host insane shows. “Definitely our craziest shows have been rap shows,” Windsor says. “They draw the biggest crowd by far, and people are really excited about that. It’s nice to be able to give these younger kids a chance to play a show, and it’s inspiring to see them start their careers and build fans.” Some rap shows the collective has thrown has been far too large for their small storefront.

Recently, they’ve been collaborating with local rapper Murderous T who is working in Rose Park to renovate an old church and turn it into an arts community center and venue. Windsor says at their latest show at the church, an event called The Big Picture Fest, 200 people showed up to watch young, local rappers perform. “It was crazy,” Ledesma said. “I was sitting there pouring gas into a generator while it was running so this kid didn’t have his set cut off.”

“I’ve talked to the cops a couple times there,” Windsor said. “They always ask me ‘What are you doing, man?’ I just tell them we are putting on a community show, because that’s what we are doing.”

Recently, the collective has rededicated itself to producing clothing and merchandise for bands and artists. Ledesma says the night before he worked until 2 a.m. following the show, getting local artist FebruaryFilth ready for an art fair. “I worked with her for a lot longer than I thought I would, getting her ready,” Ledesma says. “She asked me how much she owes me and I told her we would figure that out later. What was important was getting the shirts out there so she could sell them.”

The willingness to help and the charity that the Goldblood Collective exhibits is what makes it stand out as a true advocate for communal art in Salt Lake City. There is no “I” at the collective, there is just “we,” and that shines in whatever the three owners put their mind to. With big plans for expansion in their future, the Goldblood Collective seems like it will make a name for itself while keeping the philosophy and principles of DIY culture at heart in everything it does.

“DIY till we die,” Windsor says. “I truly believe that.”