00:00 / 16:39
Spotify Stitcher
RSS Feed
Share
Link
Embed
The word “hacker” often connotes a lone, bespectacled computer villain sitting in a dark room, breaking code to alter the White House’s homepage or gain access to people’s personal account information on Amazon. For the people who actually do it, however, hacking is more about taking something that was made for one purpose and integrating it into your own creation to do something else. The Transistor and Make: SLC are part a community of people around the globe who see something cool and think, “Hey, I could make that!” 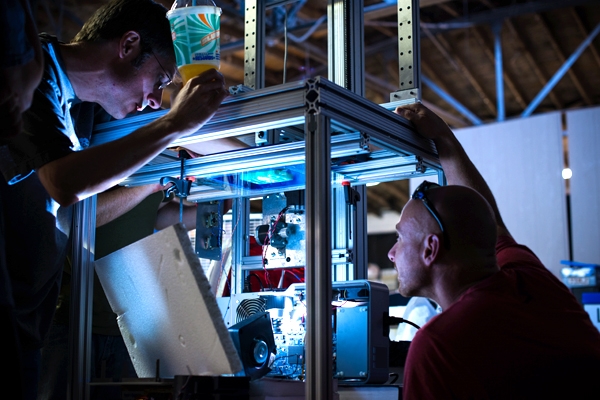 The word “hacker” often connotes a lone, bespectacled computer villain sitting in a dark room, breaking code to alter the White House’s homepage or gain access to people’s personal account information on Amazon. For the people who actually do it, however, hacking is more about taking something that was made for one purpose and integrating it into your own creation to do something else. “It doesn’t matter if it is computers or electronics or software, or social aspects or science or physics or anything. [Hackers] will take something and go, ‘Well this was made to be something in the garden, and I’m going to turn it into a fusion reactor,’” says Deven Fore, founder of Provo’s hackerspace called The Transistor. The Transistor, along with the eponymous group and hackerspace, known as Make: SLC, is part of the Make movement—a community of people around the globe who see something cool and think, “Hey, I could make that!” The vanguard of this movement is Make Magazine, a national, printed and online publication started in 2006 that showcases various reader-submitted DIY projects—“Making Bar Soap,” “Simple Night-Vision Goggles” and “30lb Fighting Robot” are some of the current how-to guides on makezine.com. We know how industrious and organized the sons and daughters of Deseret can be, so it was only a matter of time before the Make movement spread to Utah.

In 2009, Make: SLC founder Michael Beck moved from the Bay Area to Salt Lake City. He had seen the hackerspaces on the West Coast, including Make: SF, and thought that Salt Lake could use a Make group of its own. He rounded up some like-minded people and put together HackSLC, a hackerspace (or hacking venue) in Salt Lake that housed Make: SLC. The group worked out of that location for three months, but due to expensive rent and lack of membership contributions, they moved the operation to Provo to start The Transistor. About nine months later, “Richard Thompson came along and said, ‘Hey, let’s start Make: SLC again in my warehouse,’” says Tim Anderson, a founding member of both Make: SLC and The Transistor. In addition to The Transistor, Anderson set up shop at the new Make: SLC space in downtown Salt Lake City, which was reformed by way of The Transistor hackerspace.

Since August of 2010, Thompson and Anderson have shared the Make: SLC headquarters—housed in a State Street warehouse right next to The Bayou—with Dan Mitchell, James Howard, Devin Hales and a handful of others, with Fore and Beck moving between the two spaces as well. Half of the building is filled with power tools, soldering irons, circuitry parts, laptops connected to automated 3D printers, and electronic equipment in various states of assembly. The other half of the building is dedicated to Thompson’s computer graphics museum-in-progress—stacks and rows of computer equipment from Commodore 64s to refrigerator-sized rendering servers used for flight simulators. When I visited Make: SLC, on their public night, I found a dozen guys milling around, programming software, burning things, debugging robots and shooting the shit about their individual projects. It was like high school shop class for adults—but without a teacher to stop the really good experiments. “We’re a loose affiliation of peers, rather than [having] somebody that’s in charge,” says Thompson. Gathering and sharing knowledge, tools and equipment under one roof is the primary purpose of the hackerspace. Because people from every background and skill level are welcome at Make: SLC, chances are somebody there can help you with your project, whatever it may be. “I have an electrical engineering degree, but I have a career in software, so I needed to be around people who have done electronics in a practical way to be able to learn from them,” says Thompson.

Howard, Anderson and Hales are some of those people who have practical experience with electronics—together, they have designed and built RA (pronounced “rah”), a circuit board used to control 3D printers, and are using Kickstarter to fund it, which runs through Aug. 12. A 3D printer uses a computer-controlled plotter within a cube-shaped frame to build objects from the table up, by melting and layering thin strands of PLA plastic. They can be used to make sculptures, mechanical parts of all kinds, and even pieces to build other 3D printers. Commercial versions of these machines can cost upwards of $100,000, but because of open-source software, free online blueprints and innovative products like the RA board, the average hacker can build one for a few hundred bucks. Mitchell, an artist who teaches ceramics at Rowland Hall and advises the school’s Make club, has integrated 3D printing into his curriculum. He had his students build one from the ground up and use it to make detailed sculptures. This project, he says, wouldn’t have been possible without help from his fellow Make: SLC members. Though most of the projects taking place within Make: SLC involve computers and circuits, the members welcome all types of makers, from mechanical to crafty. “It’s mostly electronics because that’s mostly what people [here] are interested in,” says Hales.  Howard chimes in, saying, “But if someone wanted to come here to sew, we’d be fine with that.”

As far as exhibiting at Craft Lake City, expect the Make: SLC crew to bust out a lot of 3D printers and some of the weird art pieces built by them. Mitchell’s 3D printer-fabricated “marble printer” creates shifting images akin to an oversized Connect Four game. Anderson describes it like this: “Think 20 rows—a 20 by 20 grid full of marbles and it makes a picture. It’ll pump up black or white, depending on what he wants to be next, and just refill the picture with whatever he wants. He’s bringing that by Craft Lake.”

Back in 2009, when Make: SLC was searching for the proper home base in Salt Lake, Fore was down south setting up Make: Provo. In December of ’09, Anderson, Fore and Gordon Cooper moved their new Make group into the third floor of an old Provo candy factory and christened their hackerspace “The Transistor.” With almost a dozen computer workstations in a furnished office strewn with electronic parts and empty soda cans, The Transistor is a different world from the Make: SLC warehouse. Many of the guys at The Transistor lean more toward the software and programming side of hacking and have a penchant for gaming. They recently participated in a contest put on by VIMBY (Video In My BackYard), which pitted several hackerspaces against each other to see who could make the coolest project. Their project, called Zombie Lasertag, was basically a real-life video game: “We set up an 8-foot-by-16-foot town and attached a bunch of Barbie dolls—that we had painted like zombies and covered in sensors—to a bunch of RC cars so they could drive around this town. And then we took some Nerf guns and put lasers in them. You hit the zombie in the sensor, that would kill a zombie,” says Anderson.

The Transistor’s members aren’t all strictly computer nerds, though. Members John Fenley, Aaron Christiansen, Cooper, Anderson and the gang participated in the 2012 Red Bull Creation Challenge, building a fully automated machine that opens a can of Red Bull, chills and dispenses the beverage and then crushes the can, all in 30 seconds. Though this kind of project is a novelty, the technology that makes DIY projects like this possible for the average maker or hacker also has practical applications. “I saw someone who had a dishwasher that broke. The control board broke and they actually ended up replacing all of the control circuitry with an Arduino [a multi-use microcontroller board]. Rather than buying an entire dishwasher for $100, $200, they spent like $30 and did it themselves in three or four hours,” says Fore.

The folks at The Transistor have plenty of this technology, practical or just plain cool, to show off at Craft Lake City. Anderson has a techno-graffiti project in store: “Elefu, my company, is planning on bringing LED throwie kits—which is basically an LED that blinks red, green and blue in various combinations on its own, a battery and a magnet. You tape it all together so you can just throw lights around,” he says. Also, expect some robots—Fenley has built a robotic arm that mimics the movements of the users arm, as well as a gigantic and downright terrifying creation Fenley calls the “Pumpkin Crusher.”

Though both Make: SLC and The Transistor consist mainly of members who pay monthly dues, both groups offer free public nights to anyone who wants to get help on a project, show one off or just see what all the buzz is about. Make: SLC has a free night every Wednesday from 7 to 10 p.m. at 653 S. State St., and The Transistor holds theirs on the first Saturday of every month from 6 to 9 p.m. at 560 S. 100 W. in Provo. Go to makeslc.com and thetransistor.com for more info, and to see what these hackers and makers are up to. You can witness what techy creations they have in store for us at Craft Lake City on Aug. 11.