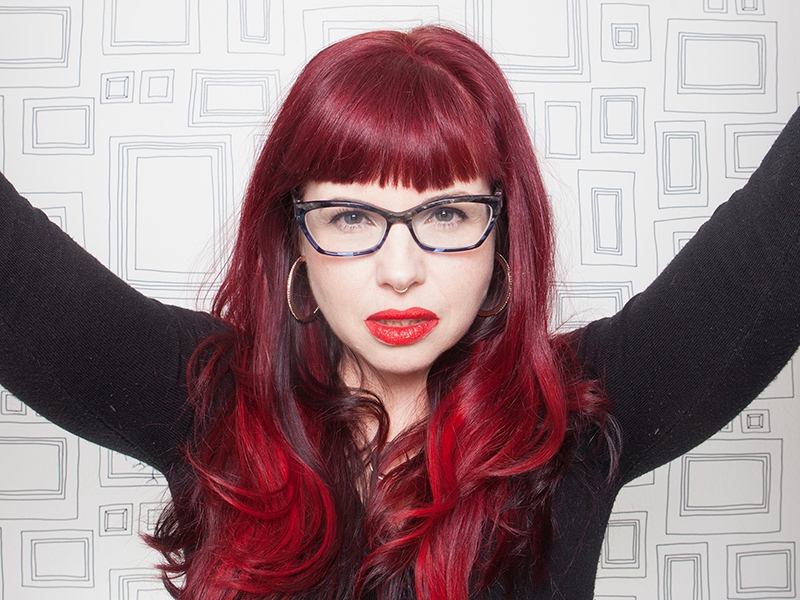 If you’re looking for the perfect holiday gift for anyone you love—or hate, for that matter—grab a copy of Kelly Sue DeConnick’s latest and greatest contribution to the comic world, Bitch Planet. This dystopian series features a patriarchy out of control that exiles women who don’t comply with its expectations to a prison planet. I spoke with Kelly Sue DeConnick about her busy writing schedule and how she plans to dismantle the patriarchy one panel at a time.

DeConnick is a true heroine and force for feminism within the comics industry. The majority of our discussion focused on her newest project and what it means to write what you want to write. It’s not easy being a woman in the industry because misogynists are inhumanly persistent with their hate. As such, even feminists can be fooled into thinking that comics are a boys’ game, all spandexed Barbie dolls for preteen masturbation. Well, get ready everybody—it’s time to sit down for some education and a tall glass of MRA tears with Bitch Planet. It’s a prison planet for bitches—the businessmen call it an “auxiliary compliance outpost,” just like “torture” is recoded as “enhanced interrogation program.” Women who defy the will of their fathers, husbands, employers, etc. are shipped to a prison industrial complex supercharged with omnipresent technology. It’s all about power—who has it and who doesn’t—and who’s really in control of the story of the human race. It’s a feminist re-imagining of the Genesis story, an examination of sin, and just one damn-well written story with an extremely diverse cast of characters that we’ve barely met in the first issue. This familiar exploitation setting (Caged Heat, anyone?) is subverted, as the women on Bitch Planet are raw, emotional people.

DeConnick had a lot to say about her newest series published by Image Comics, from the technical to the thematic. Foremost is her affection and gratitude for the fans. Girls everywhere are already picking up this series and immediately understanding the dire warnings within. Reader support is passionate and expressive. Several people have already gotten “Non-Compliant” tattoos (myself included) to proudly stand in solidarity for women’s rights to stand individually.

It’s no wonder. By the end of the first issue, DeConnick’s characters are already distinct and vibrant. From the large and boisterous Penny Rolle to the switch-protagonist Kamau Kogo, these women are caged and enraged and already resonating with fans. Kogo in particular is “so strong and so tenacious,” says DeConnick—she’s an homage to Foxy Brown and the ass-whooping martial art stylings of Superfly. DeConnick credits artist Valentine De Landro for capturing that familiar and enchanting prison-funk vibe and being “able to say so much with just her posture.” Speaking of scripts to come, every third issue will detail the backstory of an inmate, with fan-favorite Penny up first. And for those afraid that the unnervingly plausible dystopia depicted would grow too depressing over time, we’ll find a hero in the uncompromising Violet, whom DeConnick loves because she is, DeConnick says, “as ‘classic hero’ as you can get.”

Naturally, DeConnick has received some negative feedback as well. The stark and annoying reality of overtly writing about feminism and addressing issues within a male-dominated society is certainly a scary experience. However, you must ask yourself, “Are you woman enough to survive Bitch Planet?” just as the cover does in all of its pink glory, the outline of a woman giving two middle fingers to the world behind her. What she is doing is spearheading a movement—one that is tongue-in-cheek, but extremely well-educated and not overly academic. The book is meant for anyone who can read at a mature level, of course, but you don’t have to have a master’s degree in gender studies to understand exactly what is going on. It’s intersectional reading via Grindhouse and a twist on science fiction. If you enjoy Margaret Atwood’s The Handmaid’s Tale, DeConnick deliberately references the secret police and the Eyes of God, aka males with eyes, watching with panoptic surveillance. “There’s some Tarantino DNA in there,” she says, that helps frame the narrative, as we’re constantly going to be filling in details. DeConnick, De Landro, and colorist Cris Peters present a world of contrast as bright and uneasy fluorescents of Earth clash with the dark and foreboding Planet of Bitch. There is so much space on Bitch Planet, the panels in which there isn’t rioting are almost bare, adding in an element of Lovecraftian horror underneath the overall structure of the story. Yet, at this point in time, it’s about women in prison who must prove their strength against all odds.

If it sounds familiar, you might be thinking about the recent Netflix binge-watching trend about women in prison, Orange Is The New Black. The similarities are basic, but with DeConnick’s writing, it’s not the story of a white feminist trapped in a hell of Otherness. All of the women are “non-compliant” for a variety of logical, legal and irrational reasons. One woman is punished for driving her husband to an affair because she wasn’t as interested in sex. Bitch Planet shamelessly stresses the pervasiveness of victim-blaming and the patriarchal sense of entitlement and privilege at the forefront. The message of recognizing oppression that these fictional characters must endure is further complemented by a beautifully challenging and critical essay about real life, right now, written by a professor of gender studies, Danielle Henderson. “But I’m Not Oppressed” is just part one of the back-matter writings, an exciting addition nestled in at the end as the perfect capstone to the comic. I highly recommend checking out Henderson’s writings and seeking out her memes “Feminist Ryan Gosling.” DeConnick laughs a little as she contemplates her feelings on finally unleashing this book unto the world. It’s “terrifying,” she replies with all honesty, “I have the gift of finding the glass half empty, so as thrilled as I am with how the book is being received, it’s kind of an incredibly insane reception, and now all I can think is ‘issue two is never going to live up to this!’”