00:00 / 16:39
Spotify Stitcher
RSS Feed
Share
Link
Embed
Over the last four years, Signed & Numbered has lived a nomadic existence. What began as a tiny basement poster shop on Broadway expanded into a custom frame shop, necessitating various moves to locations around the Salt Lake valley. Now located at 2320 S. West Temple, and enough room to fit the entire operation under one roof, the shop has evolved into the creative home base envisioned nearly two decades ago. 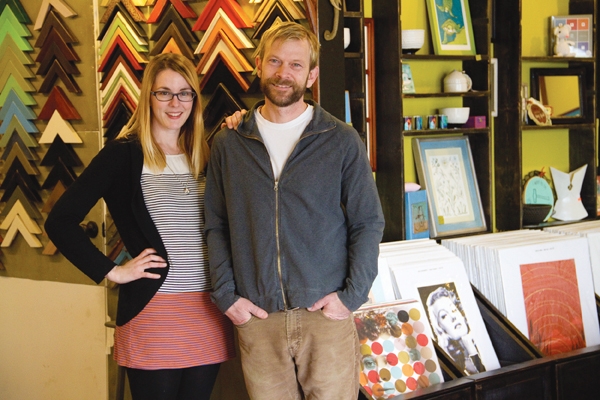 After multiple moves in their four- year existence, Signed & Numbered owners Phil Sherburne and Leia Bell say that their South Salt Lake location is where they intend to stay. Photo: Katie Panzer

Over the last four years, Signed & Numbered has lived a nomadic existence. What began as a tiny basement poster shop on Broadway expanded into a custom frame shop, necessitating various moves to locations around the Salt Lake valley. According to owners Leia Bell and Phil Sherburne, Signed & Numbered is staying put in their new shop on 2320 S. West Temple. With enough room to fit the entire operation under one roof, the mom n’ pop shop has evolved into the creative home base Sherburne had envisioned nearly two decades ago.

Of course, before opening Signed & Numbered, the indie power-couple lived on Kilby Court and operated the namesake music venue. Unless you were born after 1993, or were exiled to Provo, you’ve been to a show at Kilby Court, you’ve seen Bell’s gig posters all over Salt Lake promoting Kilby shows, and you probably have one of her magnets that you snagged from the ticket booth on your refrigerator. You also know that as Bell’s art garnered recognition and her poster collection piled up, Sherburne sold the venue and the two pursued another avenue of livelihood—a poster shop and gallery, slinging gig posters and fine art prints from artists local and at large, including Bell’s own work.

Thus, Signed & Numbered was born. Opened in the basement of Slowtrain (R.I.P.), the store thrived selling music-related art beneath the lauded independent record store. The business gained popularity as a major stop in Salt Lake’s Gallery Stroll as Bell and Sherburne hosted several highly attended art events—in particular, the Big Lebowski-themed show in 2009. The show, titled “This Aggression Will Not Stand, Man”: Art Inspired by The Big Lebowski, drew large crowds and made a buzz in poster-fiend circles (printmaking heavy-hitter Tyler Stout’s movie poster created for the event is currently fetching $2,000 on eBay) and helped build the Signed & Numbered following.

When they opened the first shop on Broadway in 2008, Bell and Sherburne hadn’t planned on making picture frames. At first, the shop offered Ikea and thrift store frames, but the shoddy craftsmanship of the cheap frames didn’t mesh well with the hand-made prints they were putting in them. “We didn’t mean to be a frame shop, but seeing how badly the other ones were made … We kind of had to be a frame shop, really,” says Sherburne. With 17 years experience as a carpenter, Sherburne had the equipment and the know-how to get the framing side of the business moving. He says, “We were making it up as we went … It started out as a poster shop and then I got the tools back out and started making simple frames…“ Bell adds, “It just kept evolving from there. We kept adding more and more frames and that started to become what people were coming to us for, so we had to get a bigger shop.”

They moved the operation to the old 21st & 21st Coffee building, next to Blue Plate Diner, but with limited gallery and poster space, they had to open up a second, posters-only location back on Kilby. As frame demand increased, Bell and Sherburne searched for a location where they could consolidate the gallery and frame shop. They settled on their current location on West Temple and moved the business once again. When asked how all this moving around has affected the business, Sherburne says, “It’s gotten better every time. Every time we’ve moved, we’ve gotten more business.”

The two couldn’t have found a better place to let the business really take root. With enough space for a showroom and poster gallery, production area and full woodshop, Signed & Numbered has grown from the little mom n’ pop poster shop into a thriving business with 10 employees: a collective of artists and artisans. “I had always envisioned this, a place where everything was together. Even before Kilby … a place where craftspeople and artists … could work together, where they could feed off each other. And I think it’s on that track now,” says Sherburne. Apparently, the public has developed an insatiable appetite for all things framed. Even with 10 employees, the two say that business has been so good that they can barely keep up. “People really appreciate handmade things and notice that they’re handmade … Maybe it’s worth it to spend a few extra dollars and buy something you know is well made, and made here, and made from environmentally [friendly] materials. I think that’s important to a lot of people,” says Bell.

This new direction in the business is just what Bell and Sherburne wanted. Sherburne, whose start in carpentry involved building expensive furniture for rich people, says, “I wanted to build something … I can’t describe it, but I think it’s what we’re heading into now … I always wanted to build things that were more approachable and more …” “Accessible?” suggests Bell. “Yeah,” says Sherburne. “People that I know could appreciate them. Handmade stuff for people that I know.”

Although they don’t have any particular plans for upcoming gallery shows, Bell and Sherburne may have something in mind for later in the year. Until then, stop by Signed & Numbered at 2320 S. West Temple in SoSaLa and get some handmade stuff for people that you know.