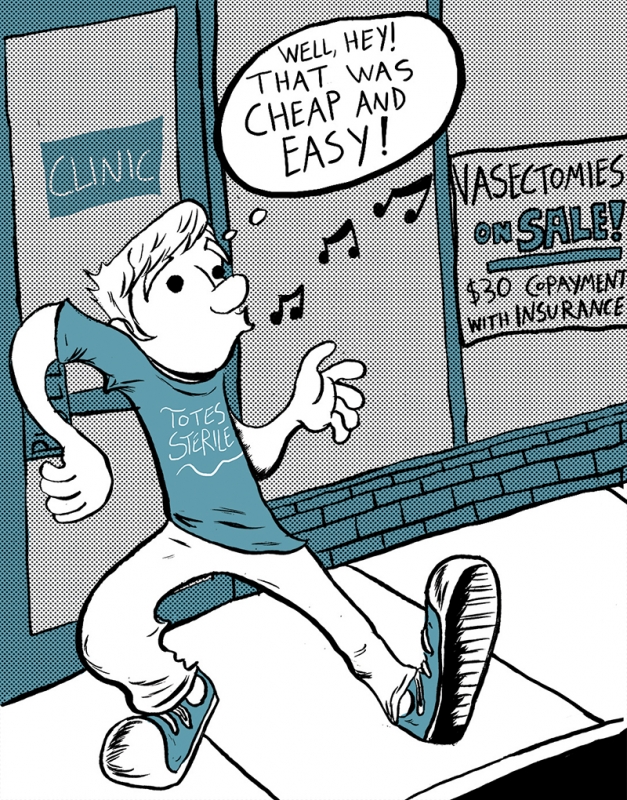 How I Learned To Love My Vasectomy

A large group of kids paraded around my house, and in their wake, they left a path of destruction—juice boxes were strewn about, toys littered the yard, and my pleas for compliance were met with the proverbial 5-year-old middle finger. Shockingly, I was ultimately grateful for these hellions terrorizing my house because they were blowing away any doubts I was having about a procedure I was preparing for: In two days, I was scheduled to get a vasectomy.

I have two kids now, a 4-year-old and a 1-year-old, and even in their most epic of fits or tantrums, I constantly think of how grateful I am to have them in my life. My wife and I decided long ago, however, that two kids would be our optimal number—financially, environmentally and mentally.

I watched my wife look for a contraceptive that didn’t impact her weight, mood or hormones. Not only do women have to put up with the societal expectation to take these contraceptives, but they are being limited in how they can actually access a form of birth control that works for them and their bodies. The recent ruling in favor of letting Hobby Lobby choose which forms of contraceptives they cover denies women the opportunity to truly choose what method is best for them. This is all being done under the label of religious freedom and casts aside the rights of these women.
I discovered that my insurance classifies a vasectomy as preventive care, which is covered by my insurance after I pay my $30 copay. I fail to see the difference between my wife’s methods of birth control that prevents fertilization and a vasectomy, which also prevents fertilization. Paying $30 once as a permanent form of birth control vs. paying $30 a month for my wife’s form of birth control also seemed like a no-brainer.
I spoke with several “conscientious objectors” who were more than willing to tell me why I was making a mistake. Something could happen to one of my kids or my wife, or I could divorce. I would be less of a man, or just because … “Your balls, man!” I was actually surprised by the support I got from other dads who had made the same decision as they eagerly welcomed me to the Vasectomy Club (tentatively) and told me all of the ins and outs for a speedy recovery (frozen peas).
Once you get over the fear of making the call, scheduling a vasectomy is ridiculously easy. I found a urologist who could get me in ASAP, and that was it. I received a pamphlet in the mail a couple weeks later that detailed what I needed to do before I went in for my visit, which consisted of not taking any blood thinners, shaving most of my business, and not being a huge dumbass by having unprotected sex and knocking up my wife.
I arrived at the urologist’s office with my wife to find one other gentleman in the waiting room. Up to this point, I hadn’t felt nervous about the procedure, but as I sat, I found myself jumping every time the door to the examination rooms opened. Apparently, I wasn’t alone: When the other guy was called back, he pointed at me, like I was the one they were looking for. All I could do was to quickly point back at him, my mouth hanging open in shock. He reluctantly went back, and I continued to wait. Soon they called me back and told me to take off my pants and to have a seat. Moments later, the doctor came and explained the procedure in great detail and made sure that I was fully aware of what getting a vasectomy meant for my future as a breeder. I would still produce sperm, but my vas deferens would be cut: They are the tubes that allow sperm to travel out of the body to make babies—cutting these tubes leaves those ambitious swimmers no place to go, and I would shoot blanks for the rest of my life. I told him to go for it.
I focused on the plain, white ceiling, trying not to look down as he prepped me. When the doctor asked me what I did for a living, I knew that he was distracting me from the needle he was about to shove into my sack, so I became a fountain of information about my job. I felt little more than a pinch, which was quickly over with, followed by tugging sensations as the doctor did his thing—I had lost all feeling in my testes. Vasectomies are outpatient procedures, so aside from numbing my nuts, there was no other medicating. One brief conversation, and the procedure had come to a quick end. Aside from feeling slightly violated and weirded out by the experience, I was fine. I put on my pants and went home to spend the next two days in my basement revisiting a few coveted gems from my VHS collection and appreciating my bag of frozen peas.
Now, no more patter of little feet, no more bottles or diapers, no more periodic wondering when that “time of the month” is a little late. Instead? Awesome, worry-free sex for life. Totally worth it.
[Editor’s note: Vasectomies DON’T protect against sexually transmitted diseases/infections.]
Photos: