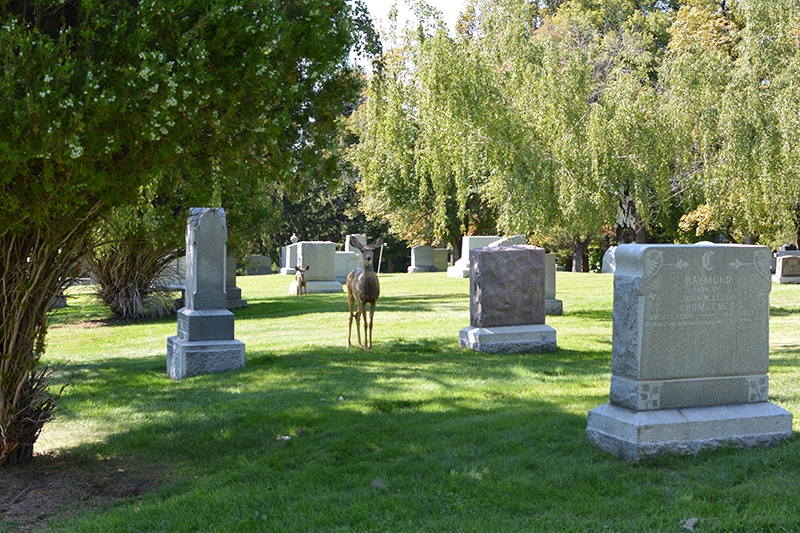 Into That Good Night: A Look At Salt Lake’s Graveyards

As a year-round cemetery aficionado, I’m pleased that SLUG has given me the opportunity to introduce normies to the beautiful mortuary art that lives in our fair city. I know cemetery exploration isn’t a super-popular hobby, but it really should be. There’s nowhere like a cemetery for peace and quiet, and you never know when you’ll stumble on some quirky or historic resting place. I went to two of Salt Lake’s oldest boneyards and found some interesting stops for this year’s Halloween season.

Mount Olivet Cemetery was established by an Act of Congress in 1874. It is located directly across 500 South from Rice-Eccles Stadium on the University of Utah campus, so peace and quiet is not a constant here, but there aren’t a lot of visitors, either. The place is crawling with deer. I stumbled within a few yards of doe and fawn groups more than once, and they seem wary of—if relatively used to—the human presence.

Mount Olivet is home to historically significant graves—many of which are in good condition for their ages. Several governors and other prominent figures from Utah’s history are buried here, as well as Civil War–era soldiers. There are numerous examples of truly unique funerary art, including the classic “broken column” obelisk—which I’ve only seen in books until Mount Olivet. This cemetery also has, in my opinion, quite a bit more modern art–leaning stone décor, and thus has a wonderful generational feel.

Near the westerly border, there is a magnificent eagle statue perched on top of a tall, square pedestal that serves as a headstone. It is really a sight to behold. A walk southeast from the eagle, and one finds some interesting religious statues, as well as a bench headstone with a copper statue of a baby and puppy. (It’s always the ones that are meant to be most comforting that creep me out the most. We should go back to using Death’s head.)

Near the running creek that flows through the cemetery, on the eastern side, there is a row of metal headstones of the same design, simple and unembellished, save for the Masonic seal. They stick out like sore, rusted thumbs among the gray and green of the cemetery, and are worth stopping to see. Keep your eyes lowered in this area, because you’ll also find the charming yet eerie headstone that is a small, open book carved with only the words “Goodnight.”

Head to the corner of cemetery streets Prospect and Main for a lovely collection of historical graves, Art Deco–style headstones and crypts with gorgeous architecture all gathered in one general area near the streets on both sides. One of the oldest I found was an 1877 family obelisk for a solider named W.M. Johns, which had survived quite well. Take a few extra steps up to the Young family mausoleum and glance inside the open but barred windows. The crypt is filled with pinecones. I guarantee that we won’t see that again for a while.

Up in the Avenues sits the largest city-operated cemetery west of the Mississippi—the Salt Lake City Cemetery. Spanning over 250 acres across the hillside, this is a cemetery with weight, history and beautiful character. The first burial took place here in 1847, so it’s had quite some time to build up impressive displays of funerary art and statues, including the famous “angel scribe.”

A great deal of LDS pioneers, apostles and related people of importance are buried in this place, and interested parties can find maps online, specifically to locate these particular stones. Even if you don’t give a fuck about most of them, you definitely need to at least drive by the giant square stone monument of prophet David O. McKay and see for yourself what first-class delusions of grandeur look like in death. Another great LDS-related grave is that of notorious “destroying angel” and bodyguard of Joseph Smith, Porter Rockwell.

There’s an odd sight to see on the winding road of 960 East 405 North—what looks like a grave dump: At the bottom of what looks like a stripped hill is a pile of headstones basically tossed aside in a ditch. Some are broken, some are lying as if they were placed there carefully and purposely; some are very old, and some look brand new. I have no explanation for its existence—you’d think if a hillside collapsed, they would clean up the damage—but it’s a fascinating view, especially for folks who are into nerdy archaeology shit like I am.

One of SLC’s most famous urban legends is that of Emo’s Grave—a bullshit tale I’ve been hearing since I was a kid, along with the rumors of Satanists who gather in Memory Grove. Emo is also a Satanist in the urban legend world, and, supposedly, walking around the grave three times chanting “Emo” will make his ghost appear. The grave is actually a crypt—that of one Jacob Moritz, and for the life of me, I’ve never been able to find out why the hell this legend exists or how it got attached to this long-dead founder of the Salt Lake Brewing Company. Anyway, we’ve all been to it. Instead, give some love to a grave I’ve been searching for for years (and finally found—on the hillside just above the crucifix statue in the Catholic section): that of Lilly Gray. The headstone itself is typical, but it’s the inscription that counts: “Victim of the Beast 666.” It’s truly bizarre, and the only answer we have as to its origins is speculation about Gray’s mentally ill husband inscribing the stone for insanity’s sake. Regardless, it’s one of those things that will rarely, if ever, be repeated.