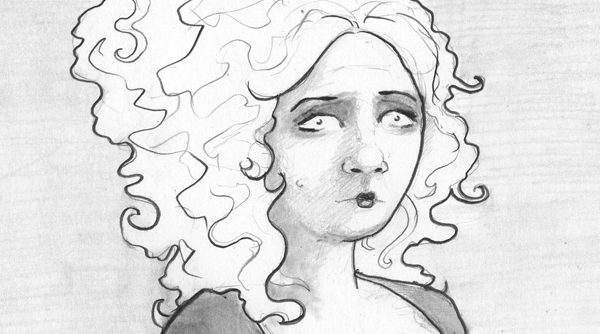 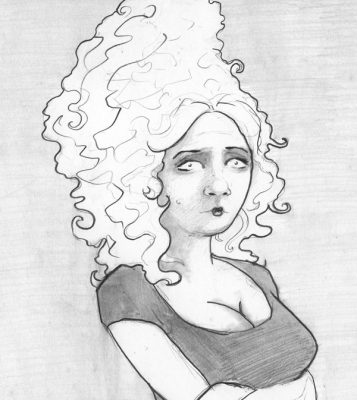 Aunt Leona, Oom and I were making our way through the front gate and up the walk of Aunt Kate’s home, Weedpatch, when we heard a frantic female screaming, “HELP! HELP!  SOMEBODY PLEASE HELP ME!”  It was a high-pitched, cartoon mouse of a voice, and we could hear the click click click of small but speedy steps accompanying the screams and coming toward us up the sidewalk.  Oom jumped back through the gate in superhero readiness, followed closely by Leona and me.   Two houses up, right arm held up pointing at the sky and taking a billion steps a second while getting almost nowhere, was a bizarre looking woman.   She matched her squeaky voice perfectly.  Naturally she would have stood about 4 ½ ft tall, but her high heels and higher hairdo added a good foot to her height.  Her hair was a great pile of golden ringlets that bounced madly as she ran in spooky contrast to her enormous boobs that stuck straight out and didn’t bounce at all.  Her face was powdered white, she had silver shadowed eyes, and her lips were drawn on tiny like Lillian Gish’s in old silent movies. She looked like a mime!  She wore a royal purple jumpsuit and hunter orange stiletto heels.

She continued screaming, “OH PLEASE, HELP ME PLEASE! SOMEBODY PLEASE STOP THE ICE CREAM VAN.”  I turned to look up the street and sure enough, waaaaaay up there, practically in Nevada, was an ice cream van.  It turned a corner and was gone.  The strange woman dropped her arm making some resigned exclamation in cartoon language and continued towards us.  She was walking now but seemed to be moving at exactly the same pace as when she was running.  When she reached Oom (still poised on the sidewalk ready for action), she greeted us with an overly enthusiastic “HELLO!”  Then she froze and let out a, “LEEEEONAAAA!” I was starting to suspect that she communicated only in exclamations.

Aunt Leona pushed past me saying, “Conny, I knew that had to be you.  You nearly gave us a heart attack.  We thought you were being chased by Bigfoot or something.  How are you? This is my niece Boudica and my nephew Oomingmak.”   She waved over us like a game show model waves over a fabulous prize.  She then turned to us, “You guys, this is Conny Likkit––spelled C-O-N-N-Y.  She’s an old friend and old foe,  but we won’t go into that.”

Conny, smiling widely, looked us over and said, “Oh Leona they’re AH-DOOR-AH-BLE.  You do come from the Addams Family and they were sooooo much cooler than the Munsters.” I suppose she meant it as a compliment, and I can take it coming from a bizarre mutation of the Telesmurphies.

Aunt Leona beamed proudly.  Conny continued, “Oh, I need to fill you in on my latest juiciness. You know that from the get-go I always thought you were a bit looney–adorable but a bit of a wing-nut.  You’d go on about spirit guides and all that.  I never believed in ghosts until I was forced to do battle with a demon.”

Conny: “I was house sitting for a friend, just a coupla blocks away and I went in to feed the cat.  While I was passing through the kitchen, I heard an evil and disembodied male voice.  I couldn’t understand what it said to me so I thought it must be speaking in tongues or in Latin which could only mean it was a demon or my dead mother who had an evil male voice and wasn’t far from a demon herself.  I fled to a nearby bedroom and locked myself in.  I was in there for a day and a half! Every so often the voice would call out to me and I would shout back that Jesus was on my side.  Eventually my friend returned home and discovered me in a real state of total insaneness.  I told her my story and after a few moments she started shrieking with laughter, went to the kitchen and pushed a button on a thingy which made the voice call out again.  Turns out it was just the speaking carbon monoxide detector alerting that the batteries were low.”

Leona: “Oh sheeesh! That’s totally something I would do.”

Conny: “Well it got me to thinking. What if a real demon decided to come sniffing around and I wasn’t prepared.  I thought of you and your ghost friend Alfonzo (suddenly an annoyed and disembodied male voice interjected, “ALFREDO!” which made Oom and I jump and gasp but which had no effect at all on Leona or Conny) and I decided to get a guide for myself.  I did the meditation and tried hard not to think about pasta or food at all, no offence, but I don’t want to be led around by visions of food.  I’m usually dieting to keep my girlish figure.  Anyway, it worked!  Out of the mist walked Frostess LeGloss.”  Conny paused dramatically and we all gawked in silence waiting for an explanation.

Conny: “Frostess is a recently deceased drag artist from Elko, Nevada.  Poor thing.  Always hoped that when the time came she’d have a dramatic or mystical death that would play beautifully in a movie.  Instead, she was hung over and dressed in dirty sweats as Raymond–her real name.  She’d popped into a dollar store for balloons, was pushed aside by a dumpy hog of a woman, lost her balance, fell over and brained herself on a clearance rack of plush reindeer antlers and other holiday head wear.  I’m helping her through the shock and disappointment.  We’ve made some real progress! Hey!  You should bring Alfonzo over to my place and we can have a play-date for the spirit guides.”

The sound of a disembodied and seriously annoyed male voice interrupted, “NOT EVEN IF YOUR TORPEDO TITS DEPENDED ON IT!”