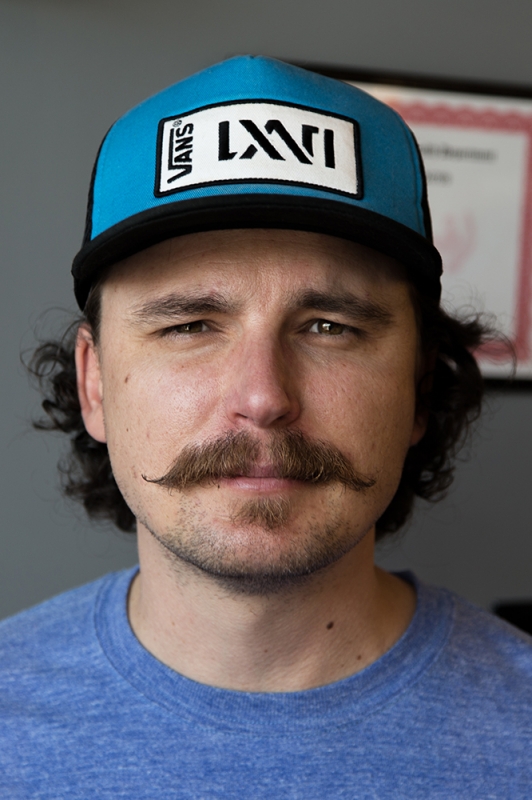 From the beginning of barbershops in the early 1900s to their recent revival in the past decade, people have been going to the barber to keep up with their hygiene as well as to fraternize with their neighbors. The act of getting one’s hair cut is so personal and intimate that it is not uncommon for a barber to become a person’s confidant. The barber shop as a place for neighbors and camaraderie is an ideal that Jed Beal holds close to his heart. He opened his shop back in 2011, not only to start a business for himself, but to also give back to his community.

As you walk through the front doors of Jed’s Barber Shop, you will notice the walls are lined with black-and-white pictures, all of which were donated by community members. On the wall above the black-and-whites hang paintings and pieces done by local artists, and if you happen to purchase one, the money will make its way back to the person who created it. The underwear bearing Jed’s signature logo was hand-screened by a friend of Beal’s who works out of his garage in Logan. “I pay a premium price instead of just ordering a whole box of underwear with the shop logo from China,” says Beal, “but by not doing that, I’m able to give someone right here in my own neighborhood a job.” Jed’s also hosts live music and recently held an event for the Best Friends Animal Society, where all the proceeds went to finding homes for abandoned pets. “Business owners don’t see the potential to give back to their community—they just take the easy way out. I would rather help and stimulate my local economy,” he says.
Describing Jed’s, Beal says, “The shop is modeled after the garage that I was cutting hair out of when I lived in LA.” That space’s floor was concrete, scuffed and worn from being worked upon. Art and prints were plastered to the wall. Scattered around were vintage men’s fashion and health magazines. Transformers played on a television with the volume down while Pink Floyd played in the background, and there was a cooler chock-full of bottled soda. It was a hospitable place where Beal spent a lot of time, where good vibes poured from every crevice; and when you walk into his shop today, all of these elements have been incorporated into the décor. Along with the inviting interior, there is hospitality to match. Every time you go into Jed’s for a haircut, you are greeted with a smile, along with a locally made, old-fashioned soda or homemade strawberry lemonade. The staff, made up of people Beal can only describe as “individuals,” offer a friendly smile and a handshake as they check you in or take you to the chair for your cut. “My hairdressers and barbers … have stretched ears and tattoos, and sometimes they even have crazy hair,” he says, “but I would say that they choose to work here because they get to listen to different music every day, because there is no dress code, because they’re allowed to be who they are … I think that our customers can tell we’re happy and that we’re here having a good time, and it helps them to realize that they can do the same.”
Jed’s offers more than just haircuts. Since finishing barber and cosmetology school, Beal has traveled the world, learning more about his age-old craft. He has cut hair and trained in techniques in countries such as Ireland, Morocco and Italy. Bringing these techniques back with him, he is able to train his barbers and bring a little more panache to his shop. “We offer an international flair on traditional barbering,” Beal says with pride. “I don’t have any desire to be a traditional barber. If there’s a guy in Thailand who can teach me how to do an awesome haircut with a sickle, I want to be able to learn that and bring it back here to teach to my barbers.”
If you’re looking to unwind and be taken care of, opt for the Long Haircut, $35, which gets you a shampoo with a scalp massage, your cut along with a styling, a neck and shoulder massage and a hot lather trim with a straight razor around your hairline to top it all off. Jed’s also offers classic straight-razor shaves by appointment, which should most definitely be considered by any man who is really looking to treat himself to something nice.
The shop was also a huge participant in last year’s Movember, which helps raise awareness of testicular cancer and men’s health not only in Salt Lake City, but around the world as well. This year, Beal hopes to have an even bigger impact by collaborating with local radio stations and sports teams. So start sportin’ your mo’ and keep your eyes peeled for the upcoming events and charities at Jed’s Barber Shop this November.
At Jed’s, all “Walkens” are welcome, so if you’re interested in a cut, swing by the shop, located in the historical district at 212 S. 700 E., in the same shopping plaza as the Sprouts Farmers Market. If you’re interested in a top-notch shave, be sure to call ahead at 801.532.5337 to set up an appointment. If you want to learn more about Jed’s and the shop’s involvement in Movember and other events, visit the website, jedsbarbershop.com.
Photos: