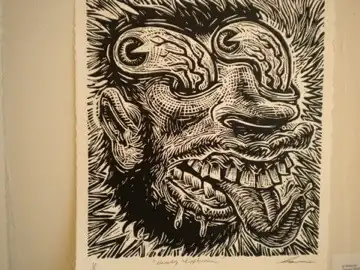 About 30 pieces of artwork, all 12-by-12 inches, are pinned to the cream-colored walls of the Kayo Gallery. It is an assortment of media: some are sketches and others are a product of more laborious craft. United they form an accumulation of peculiar orphans with nothing in common but their oddity and size.

The artworks, assembled to celebrate the gallery’s eighth anniversary in Kayo’s Annual Knock-Out Show Round 8, are displayed at the opening on February 17 and will remain in the gallery until March 16.

The square foot work is framed in an appropriate space; the Kayo Gallery is quite small itself, consisting of one simple, long room with three walls for art display. At the gallery entry, a hefty plastic donation box takes center stage, and a modest snack table offers water and cookies. The works of art are created by an eclectic mixture of artists––many have exhibited in the space before, while for others, Kayo is a new venue to display and sell their creations.

In an effort to increase artwork sales, Shilo Jackson, Kayo’s current director, has established a maximum asking price of $300 for any piece in the show. In this economy, she acknowledges, not many patrons have a surplus of money to spend on artwork.

Jackson greets gallery-goers taking part in February’s stroll at the entrance of the Kayo building. She is smiling, but perhaps nervous as well; Kayo, like so many other businesses today, is struggling. Despite her passion for the art culture in Salt Lake, she has not been able to achieve her ultimate goal to make the gallery self-sustaining, supported by sales and donations.

Jackson became director of the gallery in 2008, following Kenny Riches who founded Kayo in 2004, and after five years, she sees its potential demise on the horizon. “My goal is to finish out the year and hope things turn around a little bit,” she says.

Despite keeping operating costs to a bare minimum––she’s even halted making show cards––Jackson still finds herself losing money on the venture. “Salt Lake has a great art scene. There are some fantastic artists, but getting people to buy is another story. I just don’t know how to get to that market.”

A fine arts graduate from the University of Utah, Jackson is an artist herself, and three pieces of her work are displayed at the anniversary exhibit. Local artist Gentry Blackburn also has a piece included in the show. Blackburn’s shop, Frosty Darling, that features vintage and handmade gifts, is housed in the same building as the Kayo Gallery and is also open for the gallery stroll.

Her 12-by-12 inch work reflects her love for “old-timey things” and features the Del Rubio Triplets, a trio she seems excited to describe at the opening. “They’ve been around since the ’60s and they made a lot of appearances in the ’80s.

They were on Saved by the Bell, Pee Wee’s Christmas Special––a bunch of shows like that,” she says. Her painting, which, she admits, was finished only hours before the show, features the big-haired ’80s trio posing with their acoustic guitars.

A striking piece by Jeff Christensen features a three-eyed alien creature holding a doe with bandaged limbs while skeletons hang forbiddingly behind him. It is a disturbing but skillful example of his carefully rendered, horror-infused surrealism. Another work by still-life painter, Erin Berrett, shows a wrapped fortune cookie.

Forever packaged, the item taunts a viewer to rip it open, though it remains, in eternity, a shrouded prediction. The painting reminds one of a mundane General Tso’s chicken dinner while also suggesting the cryptic practice of fortune telling.

The works continue to be varied. The husband and wife duo, Nick and Erin Potter, recognized for their printmaking techniques, present a simple image: a cartoonish depiction of a boy in a dog suit and, once more, in a whale suit. One can easily envision the piece in a children’s book.

On the other hand, Magen Mitchell, who launched local print and craft company Paper Wasp with her husband, presents “The Fisherman’s Daughter,” which could easily illustrate a seedy comic strip. In the painting, a relentless octopus seems to have ripped the panties from a curvy dark-haired girl while wrapping its tentacles promiscuously around her legs.

Other featured artists include Trent Call, Steve Larson and Leia Bell, and this is only naming a few. Overall, the cohesive factors are the whimsical originalities and the extreme subject range that have been compacted into 12-by-12 spaces for viewers to enjoy. Perhaps, no individual piece is going to blow you away, but each has a measure of unique charm and many will make you laugh a little. This display presents a stimulating sampler platter of some of Salt Lake’s best.

Kayo Gallery has recently released a call for entry for its future show featuring “Bad Art.” Jackson calls for tacky creations––think careful renderings of clichéd celebrity portraits or over-sentimental depictions of your pet. But Jackson cautions, “I can tell the difference between someone who has had no training and just makes a really crappy piece and ‘well-executed bad art,’ is what I call it.

I want quality art, but bad art.” That could be a difficult line to tread, but the idea is certainly appealing. Good luck, fellow artists. Take the challenge and have your submissions in by March 31.