“If you don’t understand the art, it’s because there is nothing to understand. If it’s illegible, it’s illegible; it’s unsuccessful as a story, as a narrative.” An artist’s inability to communicate through their work can be largely attributed to the conventional four-year programs. The curriculum at CAS stems from traditional curriculum, found in 19th Century Paris, when art education was at its prime. 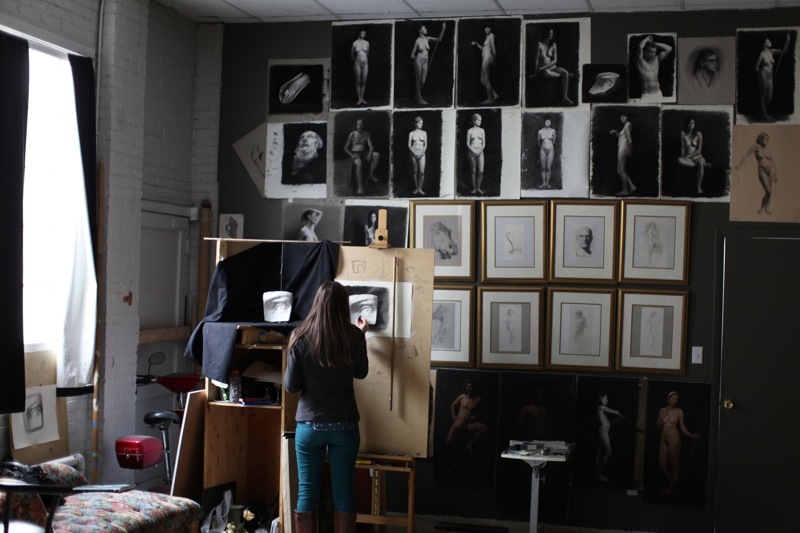 One of the primary goals of CAS is to teach its students, and its audience, visual art as a language. Photo: Ryan Brown

With events such as the Salt Lake Gallery Stroll and various art festivals throughout the year, there is little room for debate in regards to whether or not Utah embraces the visual arts. There is always room for debating what can be viewed as art. However, Ryan Brown, the founder of the Center of Academic Study (CAS), shared the story of his efforts to create a space which encourages the knowledge that can be attained in the journey to becoming a master craftsman in the art world.

I’ve often spent hours, or at least what seems like hours, examining a painting or piece of art only to decide that I must be some fool and simply not “get it.” Alternatively, there have been moments where I’ve looked at a piece and understood immediately the emotional rhetoric of it. One of the primary goals of CAS is to teach its students, and its audience, visual art as a language. When I shared my presumed ignorance to Brown, he said, “If you don’t understand the art, it’s because there is nothing to understand. If it’s illegible, it’s illegible; it’s unsuccessful as a story, as a narrative.” An artist’s inability to communicate through their work can be largely attributed to the conventional four-year programs. The curriculum at CAS stems from traditional curriculum, found in 19th Century Paris, when art education was at its prime. “After the 19th century, when modernism started to come around, as well as the advent of the modern university, it killed art education,” says Brown. “All of the sudden, art was completely conceptual and there was no need for craft. The discipline faded.”

When Brown returned from his studies in Florence, he says, “The problem was that I knew how little I learned in the university system. I was really painfully aware of the deficiencies.” In addition to absurd ideas on grading systems within contemporary art programs, universities have tendencies to force-feed information without taking the time to teach students the rudimentary skills. Brown says, “They don’t start with the alphabet, and then words and sentence structure, then get into how to put sentences together for a story. They just throw everything at you and then ask you to write a story, without knowing any of the vocabulary. It’s really ineffective. [At CAS,] the curriculum starts very simply and everyone goes at their own paces. There are no grades, which are ridiculous in an art situation.” This all is important in allowing a student to then develop his or her own style.

Brian Johnson, a current student at CAS, shared what he felt his biggest takeaway has been thus far. “I am learning to see correctly, to find better ways of describing form, and patience that I didn’t have when I attended a regular university,” he says. From Brown’s experience, upon his return to Utah, he felt the only option he had was to spread the knowledge he had obtained. In 2008 he opened The Center for Academic Study & Naturalist Painting with the intent to create an atmosphere similar to that which he encountered at the Florence Academy of Art. He wanted to provide a place for, “Not the creative person, but the artisan, the craftsman.” He stated that he doesn’t feel that how much money you spend on furthering your craft is the key factor in making it valid. “I was studying for nine to 10 hours a day, just the basic essentials, and really training in the best environment that exists. It’s complete dedication. It’s the idea of being the very best I can be—raising not only my own level up, but help bring others with me, through passing that information on,” says Brown.

Students who wish to attend CAS and schools like it have to fight to better their skill—there is little to no support offered. The schools are often unaccredited. There is no loan assistance to aid in ways in which traditional students are supported in modern universities. This is where the difference between artistry and creativity becomes key. In Brown’s opinion, to the individual who has gained popularity by means of being creative, there is a mistake being made—the assumption that the individuals work holds merit as a piece of art. Great work takes time and discipline. Brown doesn’t blame those who are able to turn out a piece of work in a few moments and sell it to an audience who doesn’t know the difference. “To play second fiddle to someone who doesn’t care is painful,” he says. “When there is an audience who doesn’t understand the standards that qualify a great art, it makes it almost impossible to succeed at this. I think this is kind of a tragedy.” He feels that “contemporary art has dumbed down the understanding of art.” He understands that an avenue for creativity will always exist, but the purpose for CAS and schools like it is to bring back the respect for the artisan.

Brown’s long-term goal is to open a school in Paris and create the ultimate center of academia for artisans. On my way out, I asked him if there was any special message he wanted to get out. “If anyone has 50 million dollars and wants to leave behind a legacy …” I do sincerely hope that there is someone who is as passionate and committed as Brown, to redefining the standards in the art world—someone committed to continuing true art education, someone who has a rather large sum of money and very little going on. For more information about CAS, check out their website here.