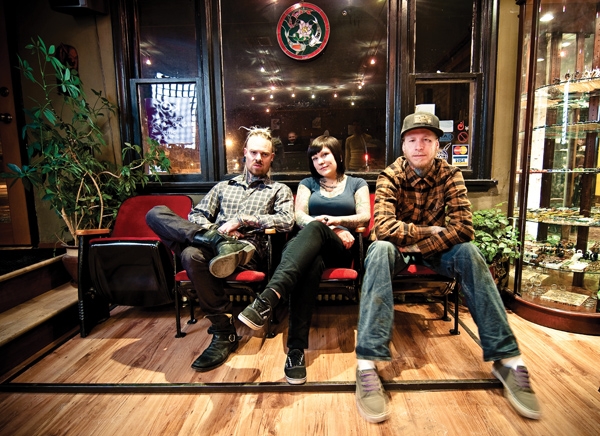 Tucked in a small space on the back end of a building on the corner of 1300 S. and 900 E. is KOI Piercing Studio—Utah’s first piercing-only studio. “I wanted my staff to be fully knowledgeable about jewelry and piercing, instead of possessing little knowledge about a lot of products,” Curt Warren, founder and business owner of KOI, said.

Warren’s interest in piercing started in 1993 while he was living in Maui. A friend of his had recently moved back from New York City with a new “piercing that I had never seen, heard or thought of before,” Warren says. Warren was so intrigued by his friends tongue piercing that he decided to get one himself.  Upon moving back to Utah, Warren’s tongue piercing motivated another friend to get one: “I went with him to a tattoo shop that was also offering piercing and was very disappointed in the entire experience,” Warren says. After talking shit about the experience, Warren’s friend suggested that he might be able to offer something superior.

After attending the Gauntlet and Fakir’s piercer-training workshops in San Francisco, Warren began piercing at Blue Boutique in August 1995. During this time he also did guest piercing stints at Body Accents in Indianapolis, Body Work Production in Cleveland, 23rd St. Body Piercing in Oklahoma, Black Hole in Reno, Black Hole in Portland and Mastodon in San Diego, all of which were piercing-only studios. Warren opened KOI on July 1, 1997.

“I never planned on being a business owner.”

Warren is modest about KOI’s influence on the piercing scene in Salt Lake City, but prior to the studio opening, people’s only options were getting pierced at tattoo shops, head shops, sex shops or their friends’ basements. “I know we helped elevate piercing in Utah, but no way in hell can KOI take credit for totally altering the course of body piercing in Utah,” Warren says. Part of KOI’s influences was due to the fact that: “We were dedicated strictly to piercing, none of us were tattooists who would have to stop in the middle of a tattoo to do a piercing,” Warren says.

“I remember when Curt left the Blue Boutique and started KOI. It was unprecedented and exciting; a piercing-only studio, piercer owned,” full-time piercer, Patrick Bogdanich says. These days the shop employs three full-time piercers: Bogdanich, Jen Davault and D.J. Heaton, all of whom started as KOI clients. Warren stopped piercing on the schedule in 2001, but still pierces by appointment.

“I feel like my interview process for KOI lasted for years. I don’t think that’s unusual. When you are the top game in town you keep an eye out for potential future team members,” Bogdanich says. “I know that I kept an eye on both Jen and D.J.’s careers before they were invited on board here.” Davault and Heaton were both hired as piercers in August 2008. “I’ve always considered KOI to be the most reputable studio in Salt Lake City and I’ve always had my sights set this way since I started. Feels like I’ve finally come full circle,” Davault says.

Past influential KOI employees include Marty Kestler, who retired from piercing in 2007, and Michelle McClellan, who left the shop in 2005 to return to Atlanta, Georgia.

Other current KOI employees include Melissa Christensen, the shop manager and jewelry purchaser, and Jen Alden, who assists Christensen with working the counter. “The lobby was tiny and everything was purple and velvet, there were pieces of jewelry that I couldn’t imagine fitting anywhere. 00g jewelry was rare and considered HUGE 12 years ago,” Christensen says regarding her first memory of the piercing shop.

Although KOI is well known for being the oldest game in town when it comes to a piercing-only studio, their jewelry selection is just as legendary. The lobby is lined with glass cases that are filled with a massive collection of intricate organic jewelry as well as gold, steel and titanium pieces. “We have clients that move to big cities and are surprised that we have the best selection at KOI,” Christensen says. The jewelry inventory at KOI is not only beautiful and quality, but it’s also been created in fair and cruelty-free environments. “All of our horn and bone jewelry is the byproduct of a major food source for the people of Indonesia,” Christensen says. She is referring to the organic carved pieces, which are made of water buffalo byproducts. In Indonesia the water buffalo is a major source of food. “The animal isn’t killed for horn, but instead of throwing it away they utilize it,” Christensen says.

“I simply wanted to work at a place that was dedicated to body piercing.”

KOI has maintained its reputation as one of Salt Lake City’s premier piercing institutions, due in part to the way that customers are treated as soon as they enter the door.

Bogdanich stated that KOI’s receptionists are more “knowledgeable, informative and courteous than most piercers that pop up around town.” There is no air of pretention when you walk in the shop, something that according to Christensen has been true since the first few times she visited KOI.  This same attention to detail is taken in the piercing process. “Piercers are encouraged to take as much time as they need to get something as perfect as it can be and to help someone feel more at ease,” Bogdanich says. According to Davault, much like KOI did with Bogdanich in his early days, all the piercers at KOI spend a good deal of time discussing various piercing techniques. “I try not to express a lot of rigidity in technique because that can keep you from learning,” Bogdanich says and adds with sarcasm, “Plus I have children … and darts. Never hurts to practice.”

According to Bogdanich, the real key to KOI’s success is that: “D.J. is really tall, Jen is pretty short and I’m just right. Together we have a very average height.” Average heights aside, KOI’s success over the last 12 years can be traced back to the reasons that the studio was initially opened. “I simply wanted to work at a place that was dedicated to body piercing,” Warren says.

Whether you are in the market for a new piercing, stretching an existing piercing or picking up some new jewelry, KOI can help.