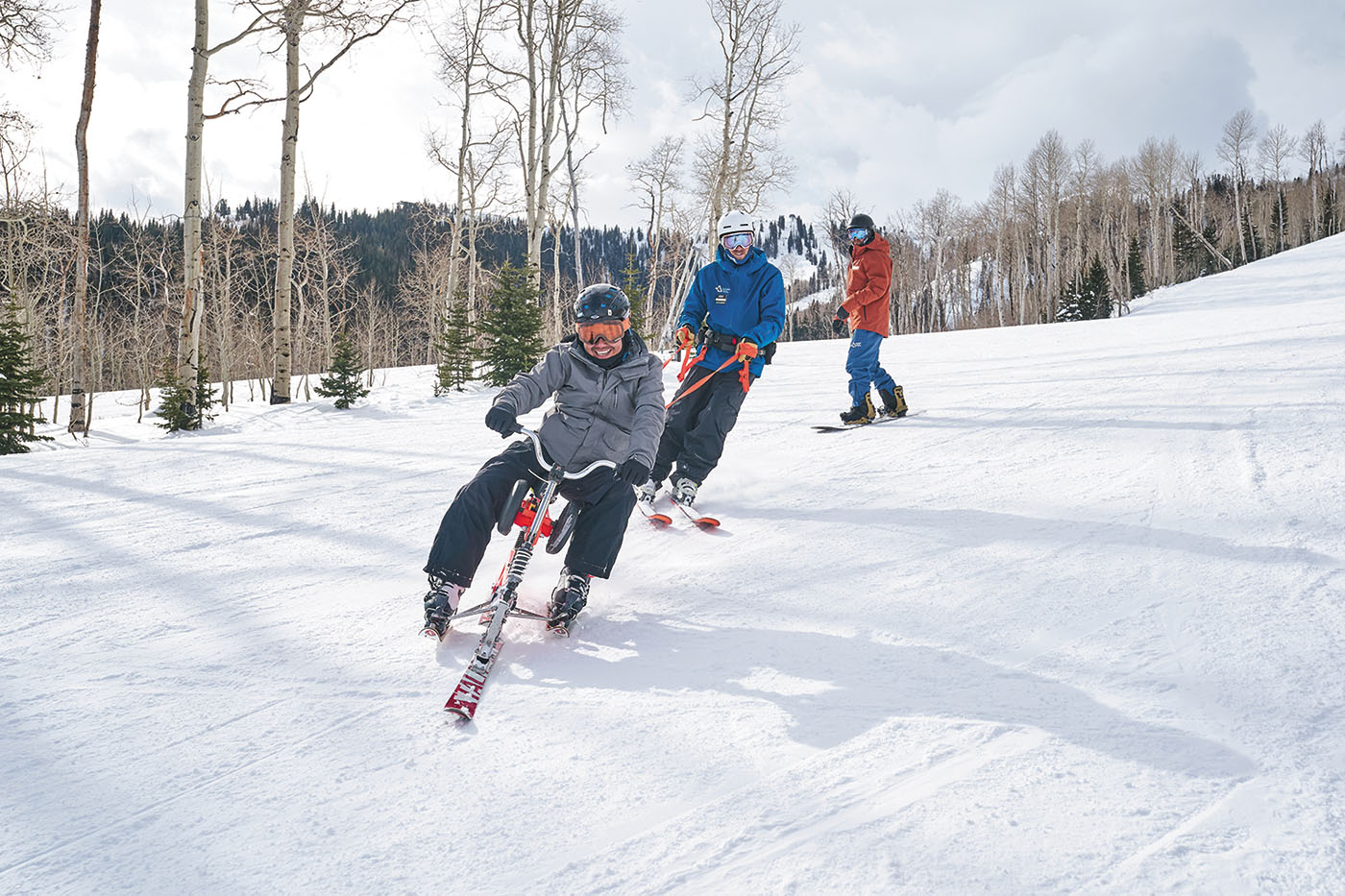 Mastering Gravity: How Brian Castillo and The National Ability Center Help Anyone Conquer The Slopes

Carving wide turns on soft, white powder is an incredible experience. The fresh, crisp air flying by as you press into a curve and the soft crunch of your plank (or planks) coasts over fresh snow are some of the finest things life has to offer. It’s the kind of experience that anybody should be able to have—and that’s exactly the reality the folks over at the National Ability Center (NAC) in Park City are striving to create. After pounding out some turns of my own at Park City Mountain, I shredded over to the NAC’s headquarters at the base of the slopes to speak with Brian Castillo about the work he and his team are doing to enable people of all abilities to ride the slopes.

Regardless of the necessities you may require, Castillo and the crew at the National Ability Center are eager to help you get onto the slopes—or rock-climbing, mountain-biking and other activities in the warmer months. “When we look at getting people out onto the hill … we don’t want there to be a barrier to recreation,” says Castillo. “[Our] programs are designed for individuals of all abilities, including those with physical, developmental and intellectual disabilities.” The NAC has instructors trained to assist and teach individuals of all abilities, and they’ve also got all sorts of specialized equipment to get individuals with any sort of physical requirements out onto the slopes. As an NAC instructor and gear manager Travis Thiele, aptly says, “Gravity doesn’t discriminate.”

Castillo is one of the ski and snowboard program managers at the National Ability Center. He coordinates thousands of experiences throughout each season for people of all abilities. “It started pretty small in 1985 with a grant from the [Disabled American Veterans] to get 45 veterans out on the hill,” says Castillo. The program has grown vastly since its humble beginnings in Park City. “Last year, we topped out at around just under 5,600 experiences for the winter season,” a figure that is more than double what it once was when Castillo joined the NAC as an instructor 11 seasons ago. With the recent acquisition of another adaptive sports recreation organization, Splore, it’s clear that the NAC is continuing to grow as quickly as it can.

The National Ability Center coordinates thousands of experiences for people of all abilities.

After our interview, I hopped at the opportunity to ride along with Castillo and one of the National Ability Center’s instructors as they taught a young girl, Brooke, how to use a sit ski. “We came to Utah because of the National Ability Center,” says Brooke’s mother, while strapping on gear for our outing. Out on the slopes, instructor Colton Bradley used a couple of bright-orange cables to drag on the sit-ski, controlling its speed while snowboarding behind it. At the same time, Brooke used two poles with skis on the ends to control the direction of the craft. On the couple of occasions where the sit-ski slowed down too much and tipped over, Castillo would swoop in on his skis and together he, Bradley and Brooke would all work together, to push it upright again. As we rode, it quickly became clear that Brooke was well-acquainted with the nuances of seated skiing, and we all flew down several runs together.

“We really focus on individualizing the folks who come through the program,” Castillo says. “I think it’s [about] taking folks to that next level, or reaching that ‘aha’ moment when they really get it and it clicks with them.”

Castillo describes a few such moments as his favorite experiences working for the National Ability Center, including one particularly heartwarming story about helping a young boy go from his wheelchair to skiing upright with his grandfather over the course of their sessions. “That was huge for this family,” says Castillo. “You know, we can take it for granted because we see and do this every day, but if we take that individual out of this environment, and they’re back home where there aren’t these opportunities … It can be really empowering for them.”

“We really focus on individualizing the folks who come through the program.”

On another occasion, Castillo worked with a young girl affected by hemiparesis, which causes one side of the body to be weaker than the other side. After working with her on skis for a little while, Castillo had the idea to get her on a snowboard with her strong foot forward. “The next season, [she was] out taking snowboarding lessons, and she went from being OK on lower terrain to being able to ride all over most of the mountain,” says Castillo.

With only a small team of full-time employees, the National Ability Center has learned to wield the tremendous volunteer efforts of our Utah communities in order to meet the rising demand for their work. “Volunteers are the glue that holds the organization together,” says Castillo. The NAC relies on the efforts of hundreds of volunteers for “anything and everything!” From instructing one-on-one to admin and coordination efforts, volunteers are clearly the lifeblood of the whole effort. “I just got addicted to it,” says Avery Hill, one such volunteer who had actually started at the NAC doing work with their equestrian team—today, however, she’s skiing with the instructors and lending her hands however she can.

The National Ability Center is an incredible resource for individuals trying to find their stride on the mountains, regardless of their current ability level. If you’re looking to take lessons, or get involved with the volunteer efforts, look no further than the center’s website, discovernac.org!