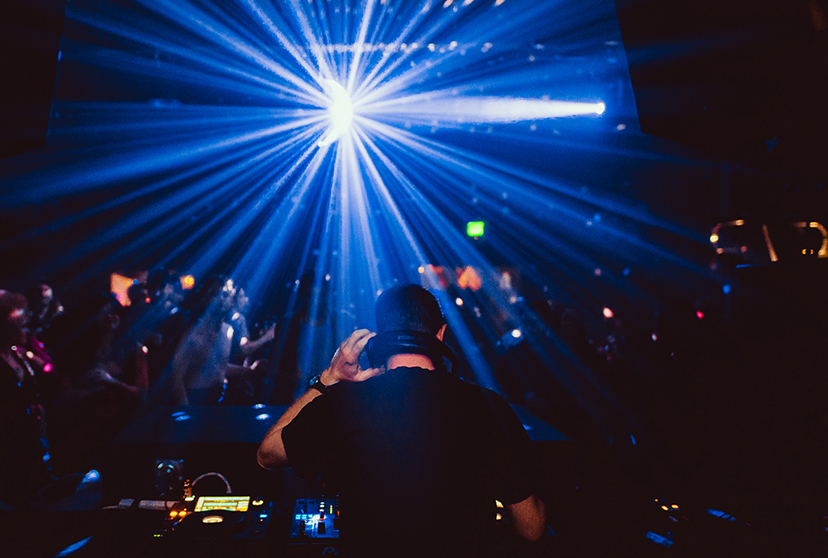 Jesse Walker of New City Movement has been one of the founding fathers of electronic music in Salt Lake City for nearly three decades now. With New City Movement celebrating it’s upcoming 20th anniversary, I had the immense pleasure of discussing NCM’s progression and milestones over the years. As a longtime fan of Walker and the NCM events, it was exciting delving into Walker’s own personal opinions of how his events have shaped the underground EDM culture of Utah.

Walker’s original intent of starting NCM was to create a “legitimate brand and reason to throw parties.” The idea started with Walker in 1993 in Idaho and transplanted to Salt Lake City on the “tailwind of fashion designer, raconteur and fellow Idahoan Jared Gold,” says Walker, with a hunger for greatness and glory. In those days, Walker picked up gigs whenever and wherever they presented themselves, and through him, I learn that locals once knew our beloved Urban Lounge as the Holy Cow, and DJ Jesse Walker was once known as DJ Send. Both facts seem hard to comprehend by younger generations, as it feels like both Walker and Urban have only been known by those names since Brother Brigham carted into town and exclaimed, “This is the place.”

Back in those days, Urban was accessed by “members” only and just cost pocket change to get in. Walker and other local DJs such as Stephen ‘Bam Bam’ Santoro, Ryan Raddon, Sergio Hernandez, and SLC’s original hip-hop artist Sam I Am, would perform at spaces like Holy Cow, the Manhattan Club and Bricks. Walker and Hernandez were offered a weekly spot at the Manhattan and decided to name their event New City after a book of the same title by architect/futurist Lebbeus Wood. The premise, Walker says, was to “promote futurism and abstract thinking in underground music, design and culture here, in hopes that our sheer optimism might result in a more colorful Salt Lake City.”

If you’ve ever attended an NCM event, hearing that this was a goal 20 years earlier, you would have to agree that Walker has accomplished just that with his events. At any given NCM show, you’re likely to see a menagerie of colorful individuals from different ethnic, religious and cultural backgrounds. Every event is a place where the people from all walks of life come together for the sake of electronic music, dance and culture.

Over the years, NCM has grown to reach a wider range of individuals in the Salt Lake area with hopes of communicating the fact that Utah isn’t just “Mormons and Sundance and skiing,” as Walker says. By building relationships with DJs and promoters around the world, Walker has been able to take NCM around the globe and be able to host visiting talent in return. As a brand however, Walker tells me that NCM hasn’t changed much in the last 20 years. The music, the vibe and the attitude has stayed the same; it’s only the logo that’s seen any alteration. “It’s sexually fluid and mysterious,” he tells me, but the basic desire to interact with his community has stayed the same. Reflecting back on the last two decades, Walker says, “It isn’t that long in reality, but it does feel significant looking back. In the past few years, watching the city’s politics, food, culture and infrastructure evolve dramatically, [we’ve] come fully into our own. Not just copying or following national trends, but embracing the weirdness and freedom of this place and inventing what comes next.”

Innovators like Walker are important and rare. Yet at this rate, the communal spirit he radiates, as well as his traditionally disco sound (an unyielding four-on-the-floor beat and syncopated bassline) will keep NCM alive for another 20 years to come. DJ Matthew Fit has also helped propel NCM to another level of fandom within the community. A DJ who primarily focuses on techno (which fuses house, funk and electro while emphasizing slightly different notes than disco with bass drums, snares and hi-hats), Fit has brought a taste of Detroit to our own Small Lake City. Walker admits that there has been countless other collaborators who have helped him and his vision over the years, and though they’re not all mentioned here, a huge fucking thank-you to all for what you’ve done for NCM, and the generations of EDM stans to come after.

NCM has had their fair share of unique events and venues, and Walker admits that one of his favorite events was held at the Paradise Palm last year for Utah Pride. He says this year’s pride celebration at Tinwell Bar was super successful, but the annual Bunny Hop at the Garage on Beck is his favorite, and I have to agree, as I re-met my partner at a Bunny Hop years ago (thanks Tinder). Walker tells me the magic of nightlife creates a unique experience and encourages him continually to create events simply because he “wants it to exist … If what you’re creating is coming from the heart, nobody can take that away from you, and that’s all that really matters,” he says.

Though he doesn’t have a specific desire for how NCM will be in the next 20 years from now, Walker hopes that anyone who’s experienced some of the magic he’s put into the events will take that away and share it with the world. As cheesy as that might sound, I firmly believe that SLC’s Godfather of House has the right idea: “Nighttime can be magical. Everyone else is asleep and the world is your oyster.” Take advantage of what NCM has done for our community collect all the pearls you can.

Be sure to check out the next NCM event on Oct. 6 at Club Bricks featuring Jesse Walker, Doc Martin, Flash & Flare, Finale Grand, Artemis and other local favorites, for a fall fling you won’t wanna miss!