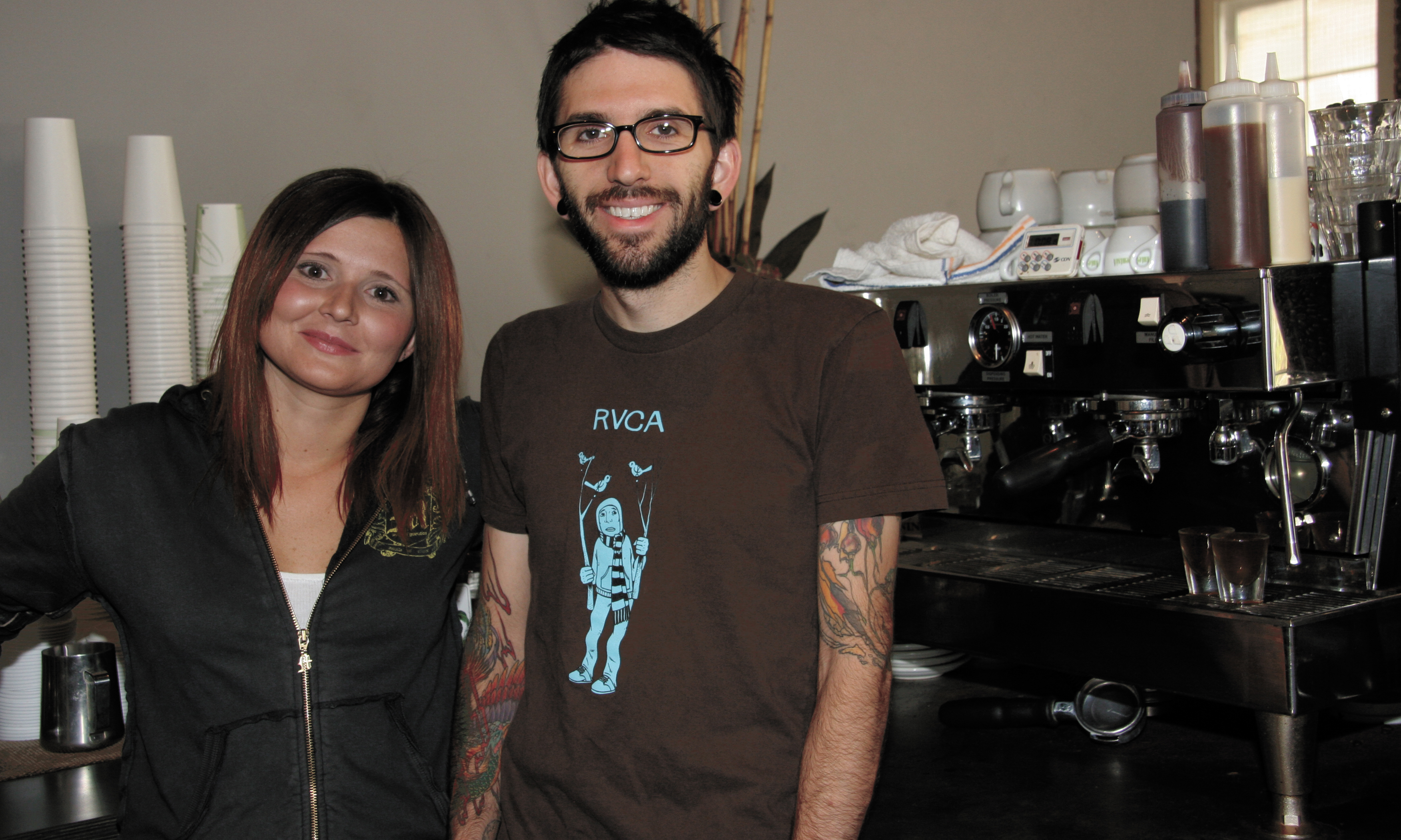 As I sat and spoke with Joe Evans in nobrow Coffee and Tea, he kept his eyes on the front door. Whenever a customer would walk in, Joe would spring to his feet, often greeting the shop’s denizens by name and knowing just what they meant when they asked for “the usual.” He answered ringing phones, recommended drinks to first-time visitors and checked up on lonely looking customers with empty cups. It was clear that everyone in the place felt comfortable. You know how in Cheers whenever one of the main characters would walk in and be greeted by everyone with a cheerfully collective “CLIFF!” or “NORM!”? nobrow’s kind of like that, but instead of a dinky old bar populated by postal employees and bartenders with fake hair, you’ve got tattooed folks carrying sketchpads surrounded by huge paintings hung on red and brown brick walls. Joe has been working in various coffee shops for over ten years, and in that time, he has figured out just what it takes to cultivate a space where people can be comfortable enough to be themselves, drink some coffee and appreciate some amazing works of art.

Joe Evans officially opened nobrow in October 2006, inspired by his days working in a coffee shop at the Salt Lake Arts Center to fully integrate an art gallery within the aesthetic of a coffee shop. “I’m way better at consuming, understanding and appreciating art than creating it. I saw myself with an opportunity to go beyond what most coffee shops do and be able to operate as both a coffee shop and an art gallery.” Almost immediately, the local art community jumped at the chance to be a part of the environment that nobrow was creating.

People who may never go to a gallery opening or any other sort of art exhibition are exposed to art at nobrow in a way that they never would be at Starbucks. The artists featured at nobrow are being exposed to all kinds of new audiences simply because their work is on display in a place that isn’t traditionally considered an outlet for displaying art. Whether the Average Joe who walks into nobrow looking for a cup o’ joe likes it or not, he’s going to see some killer art. And if that Average Joe walks into nobrow at the right time, he’ll even get to hear some killer music. The music featured at nobrow goes far beyond the cliché of overly sensitive college students strumming acoustic guitars and singing tenderly about flowers and sunshine. Joe makes sure that the musical performances at nobrow feature musicians who are actually good. “A lot of musicians realize that I’m a fan,” Joe says, “Not some guy who’s trying to make a buck off of them.”

Being located on the bustling local business mecca of 300 South, nobrow is part of group of newly emerging local businesses that seem to be picking up where Sugarhouse left off. Since we all know what happened there, Joe has become vocal about forming some sort of business alliance to make sure that their voices are heard. “I look at what happened in Sugarhouse and I think that the businesses didn’t band together early enough. I think if Salt Lake businesses band together and get to know our city council, we can have a really strong voice and we can really get a lot out of it.” With an election coming up and a new city council coming into existence, this seems like the perfect time for Salt Lake’s small businesses to make their voices heard.

As if running a successful coffee shop/art gallery and lobbying for local downtown businesses to band together wasn’t enough, Joe has also started a new brand for local artists called IFLT. Joe’s motivation behind IFLT is not only to create something of quality to be consumed by the Salt Lake art community, but also to get artists the kind of recognition they deserve. “Artists need to become known and respected, but also commercially consumable and able to make a living by doing what they’re passionate about.” IFLT’s first product will be a limited edition t-shirt, complete with hand-made packaging and a short artist bio. Future plans include producing a limited edition EP by local act The Soundtrack Scene.

nobrow will be celebrating their one year anniversary on October 19, during Gallery Stroll. The celebration will feature the debut of The Soundtrack Scene, and new art by Sri Wipple, Trent Call and Cein Watson. Stop by and say hi to Joe and his wife Emily Evans (who Joe states is the only reason he remains sane enough to do all that he does). nobrow Coffee and Tea is located at 315 East and 300 South.