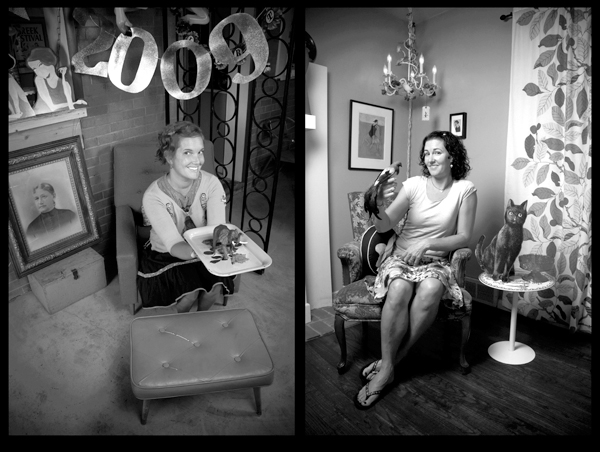 “Most craft boutiques are, in reality, snooze fests,” Molly Call says casually. It’s not the sort of opener I’m expecting from the demure mother of four who, along with Noelle Olpin, coordinates the Beehive Bazaar in Provo.

It’s certainly indicative of prevalent attitude at the semi-annual crafts expo. “A lot of craft shows tell you ‘pay us five hundred dollars and you can set up’,” says Olpin, “but that doesn’t do a lot to filter out the mediocre, the shlock.”

“Shlock,” which the craft world is apparently spilling over with, is a sort of double-edged pair of knitting needles. On the one hand, the homemade, DIY nature of crafting allows for some beautiful, one-of-a-kind works that carry with them a tangible, personal intent. Call mentions that at the National Portrait Gallery in Washington D.C., the most interesting, creative works were found in the folk art exhibits. “These people who were just doing their work in their garage made the most interesting art, because they didn’t have the pressure of the established art community to limit them. For all these guys knew, no one was ever going to see their work.”

On the other hand, the American mass consumption contraption has slipped its slimy way between the proverbial thighs of handmade crafts as well. “We go to a lot of craft boutiques and fairs where we see the same tired frilly aprons, the same wooden, acrylic-painted ‘Mom’s Rules’ signs that we’ve seen a thousand times before,” says Olpin, “and a lot of times, the people who apply to sell their stuff at the Bazaar are frustrated when they don’t get in. It’s mostly because they are bringing us that kind of work—it’s not personal. There’s no real intent there. It’s something a person did because they were bored, maybe, to pass the time.”

This is, in part, the philosophy behind the Beehive Bazaar––to showcase singular, thoughtful crafts that can compete any day with more “traditional” art. The way Olpin and Call speak of crafting is reminiscent of the unnamable driving force that motivates Conrad to write or Herzog to film. “We’re looking for people whose works are something more than a hobby. We want people who have to create, need to create, and just happen to do so in this medium.”

Call says, “Sometimes, we get an application and we can see where they’re going with it, we can see that it’s almost there. And we try to help people get to that point, where their pieces are actually communicating something, rather than killing hours and taking up space. We’re more than willing to provide craft counseling.”

“Not everything has to be funky or weird,” says Olpin, “but it has to be quality and innovative. If you’re making jewelry, we don’t want to see another bottle-cap necklace.”

Furthermore, Call and Olpin try to eschew the “get in, get out” attitude that has dominated our culture. The Beehive Bazaar is not Wal-Mart and it’s not McDonald’s. “Sometimes there are 45-minute lines,” says Olpin, “but we’re serving free food and drinks, there’s music, all of your friends are there––we started this event not as a business venture, but as a gathering of people getting together and admiring each others’ works.  We want people to take their time and enjoy it.”

The Beehive Bazaar was first held a few years ago, in a house that Call and her husband owned, which was between renters. In the relatively brief years of its existence, the semi-annual affair has become a large-scale event, with 50 contributors and thousands of attendees from all over the state and beyond each year. “A lot of us were stay-at-home moms,” Call says, “but we didn’t want to sit around on the couch, eating bon-bons and watching Oprah every day. We felt like we had more to contribute. We wanted to express a side of ourselves beyond the traditional ‘wife and mother,’ in the traditional Provo definition.”

Provo certainly has a knack for definition that in some cases rivals the Oxford English Dictionary itself. There is a very palpable cultural force in Cougarville that tends to divide things into two categories: acceptable and heretical––at least on the surface. However, once one gets past the superficial image of Provo as a giant Mormon rabbit hutch, a very interesting sub-culture emerges, which the Beehive Bazaar tends to attract.  Many contributors to the Bazaar are college kids trying something new. Others are artists who have established themselves in one medium and are looking to branch out.

Call acknowledges that sometimes a few eyebrows are raised on the part of Provo’s more tradition-bound milieu. However, she points out that if there were nothing at the Bazaar that made people say “that’s crazy,” they’d be doing something wrong. “Not everyone is going to love everything, and if they did we’d wonder to ourselves if we were pushing the envelope enough.” Having said that, it is not Beehive Bazaar’s express mission to freak out the establishment, or anything as quixotic and juvenile as that.

Olpin and Call try to maintain a balance between objects d’art and more pragmatic items. “Sometimes, there are more practical things––the aprons, the handbags, etc. Sometimes you see something and you say ‘I don’t know what it is, but I’ve got to have it.’” As could be predicted, a lot of times the older ladies buy the more practical things. Every now and then, some sixty-year-old grandma leaves with an armful of alt-crafts and funky knick-knacks.”

Call and Olpin are thoroughly pleased with the growing stature of the Beehive Bazaar. “We’ve seen too much crafting with no brains, which is a shame. There is something singular and great about a handmade item, and maybe that exclusivity is part of our mission. We really like it when someone says  ‘Ooh, where can I get that?’ and they can’t. They just have to try their luck at the next Bazaar.”