Brigham Young had a tranimal son? Yeah, you totally read that right. I heard a rumor that Brigham Young, the HBIC back in the day, allegedly had a son who donned a dress and matching falsetto voice. “What’s that?” I ask myself. “Could it be true that mine is not the only Mormon family with dirty secrets?” Imagine! 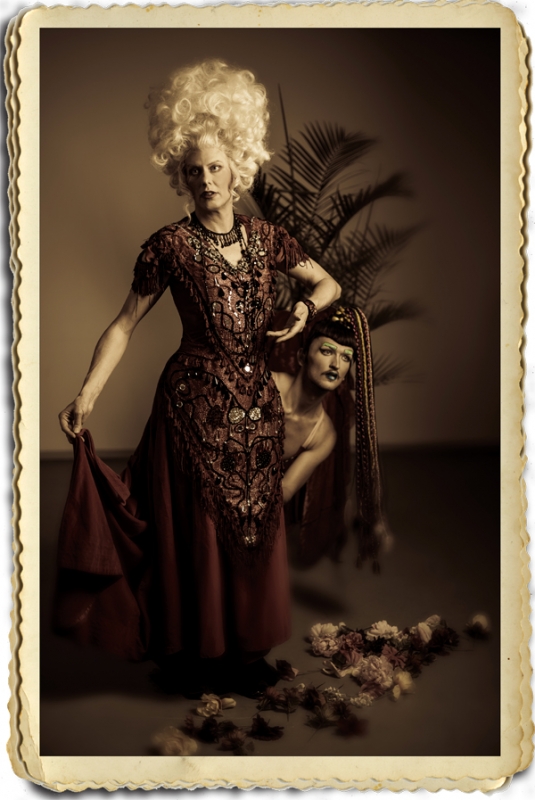 Yeah, you totally read the title right. I heard a rumor that Brigham Young, the HBIC back in the day, allegedly had a son who donned a dress and matching falsetto voice. “What’s that?” I ask myself. “Could it be true that mine is not the only Mormon family with dirty secrets?” Imagine!

I began my investigative journey delving into the dark and forbidden depths of Google, entering the above title. Sure enough, not only does a photo of the Mormon pioneer dandy pop up in my browser, but with all the pomp and circumstance that went with the operatic role of Madame Patrini. He played the title role with a falsetto voice so convincingly that it was said people were none-the-wiser to the true identity of the Prophet’s offspring.

At the end of the article I was reading, I came to the name of its author. I was hardly shocked, yet pleasantly surprised to find it had been written by a longtime friend and famous gay historian, Connell O’Donavan. This once-leading activist in the Queer Nation movement also had a drive for history and the truth. Raised LDS, he turned his passion to the familiar, and set on a life’s work of studying and teaching subjects that centered to the left, such as Mormon feminists, homosexuals and racially diverse peoples.

You must visit connellodonavan.com and read about our crazy history—stuff like the tattoo the early gay pioneers had to identify themselves, that gay couple who came across the plains, and a certain patriarch with the last name of Snow who was busted in a gay relationship and banished to Hawaii in the 1940s. It’s crazy shit, and, gay or straight, it’s great knowledge to have, so when Brother and Sister Fingerwag are judging, you can be armed. O’Donavan has recently relocated back to the 801 after a long stint as an administrator at UC Santa Cruz, and has been seen about town, giving speeches on his many essays and upcoming book—fabulously fascinating—you must attend one!

I love/hate the missing info concerning the fruit of Young’s loin (who incidentally shares his name)—so many unanswered questions. Was he gay? Who knows—he was married with 10 children. Was he trans identified? Probably not—a story of him dressing as and fooling the Prophet into thinking he was the emperor of China on a political pass-through makes me think he was just more of a theater queen.

What I love is that the art of gender illusion is alive and well, and evolving behind the Zion Curtain.

When people think of drag, they automatically think of some queen “lip syncing for her life,” feathers, jewels, boobs and Lee Press Ons—a girl with a gown, an attitude and eight hands. Nothing wrong with that, but those antics were opening up for Mme. Patrini back in 1890. There is a new school of drag in the city, a “movement,” if you will, which began with the ’80s-London underground’s Leigh Bowery, but has found its fashion within the past 10 years on the mean streets of Los Angeles. Tranimals have been stalking the stages, night clubs, and separating the herds to attack and kill with their powers of glamour, edginess and ferocity. Across the country, these walking freak shows have names like Fatima, Squeeky Blonde and, more famously, RuPaul’s Drag Race winner, Sharon Needles. This segment of the life-fierce-tastic spans from anti-glamour to the macabre. They take an extreme approach to their craft, blurring the lines of gender and reality, proving, yet again, that drag has nothing to do with pretty, and everything to do with art.

The SLC version of Tranimal is largely inspired by the wacky antics and styles of the gorgeous Jared Gomez and Drew Landerman, but has morphed and grown even larger than them in the characters of the Bad Kid Brawl, a show that is the third Friday of every month at SLC lesbian honey-trap, The Paper Moon. Created and hosted by the multi-talented Cartel Fenice, the show features a range of super spot-on glamazons. If you want to experience an amaze-balls drag/performance-art show, run, do not walk. The most recognizable of them simply goes by its X-tian name, Willard. Winning this year’s coveted and life-altering title of Miss City Weekly (in its first attempt at performing), this 6-foot-7-inch-tall tranny, who wears platforms, singlets and colorful African weaves on its head, has probably done the most for this Tranimal movement in our state in the few months since coming on the scene. Spindly yet graceful for its stature, Willard has recently guest-performed its magic on the discriminating San Francisco stage to great reception, letting the rest of the world know that, 100 years later, Salt Lake is still turning a mutha fucker out.