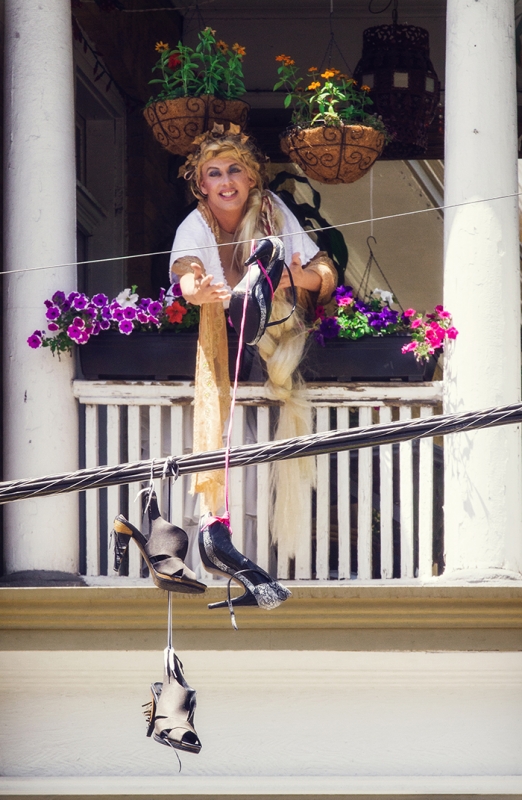 As a queen who’s been around the block a couple times, I’ve learned to be picky about what I bother associating with and which causes I bother lending my name to. I’ve done benefits with PETA and lent my name to both City Weekly and IN Magazine. Of course, I partner up with some bar or another every year to promote a Pride event, like I did this year with The Green Pig. I must take an opportunity to say thank you to owner Bridget Gordon for being such a fabulous person to work with and SLUG party-planning goddess Karamea Puriri for always being on point with yet another stellar parade contingent. Such a fun Pride—thanks, guys.Another party I did this year was a big Pride weekend kick-off with the Utah Film Center and Damn These Heels!, their official LGBTQ and A (IDK what half of those mean) film festival. We brought out my ghoulfriend Peaches Christ, Drag Queen of the Macabre and filmmaker extraordinaire. Anyone who reads my rants knows that I am super invested in the Film Center. It started a year or two after I found out that they existed, and I wanted to make sure that I not only promote them—because I love film and filmmakers—but that I use what voice I have to shout it from the rooftops. But let’s be honest—in all my years of going to film festivals, I have been to maybe a handful of films, and it was only because I was in them. I go for the parties, and the cheapest way to get into them is to work for them. I think, the first year, they asked me to go-go dance or something, but I wouldn’t get on the dance box (I don’t go-go dance anymore). It was obvious that it would be up to me to convince them of what I could do for them­—another thing I’m really good at. I brought them an idea for a fundraiser, one in which I could incorporate every facet and resource I had. They accepted, and so Tranadu: The Musical on Ice happened in February 2011.Next, I introduced them to my friend, the aforementioned Peaches Christ, and we made her film All About Evil the hallmark of the festival, complete with her coming out and hosting the opening-night party. It was a blast and a huge success. Since then, it’s grown into a much deeper and more meaningful relationship. The following year, I helped promote the one and only John Waters. Last year, they sort of made me the ambassador to the visiting actors. I felt it was a step up on the notch.This year, I have climbed even further with an invitation to help screen movies for Damn These Heels! I was honored to be asked, but found the process to be daunting. I was given so many movies to watch, and, like a modern-day Rapunzel, I was confined in my tower, screening movies for about 72 hours. The process was much more arduous than I would have imagined. They ranged from amazing to really bad, and I’ve come to the conclusion that I would much rather appreciate the finished product than have to judge who was best.

Of the many films I screened, three have made the cut. I don’t want to spoil any of the films that made it this year, but let me see if I can whet your appetite. One is called Der Samurai, a German film that has elements of Japanese horror. I liked this film, but didn’t like that the only reason that the villain is in drag is to make him seem malevolent or crazy. In this day and age of tranny awareness, I think there is a fine line. With the other two films, I can’t really decide on a favorite. One called The Circle is set up as both a documentary and a narrative film. Leave it to the Swiss to generate such a great concept. The film is about a groundbreaking queer publication based in Switzerland, starting in the 1930s, and describes what life was like in the time of its publication, with stories told by the actual staff and citizens who touched its pages during the 1950s. It’s an awesome history lesson.

The final film for the festival is MALA MALA, which got great reviews at Tribeca. This documentary shows the life of Puerto Rico’s trans community. I liken it to a modern-day tale similar to Paris Is Burning. It follows the lives of a tranny hooker, a trans club owner, a performer, an activist, a business owner and a queen who’s just about to go on RuPaul’s Drag Race. In all, there are nine profiles spotlighting a glimpse of life that most people have never seen and will be totally fascinated by.

The Utah Film Center works very hard on not only Damn These Heels!, which runs July 11–13 at the Rose Wagner Theatre, but every project they have, from free movie nights to the Tumbleweeds Film Festival for children and youth. They make our city a more cultural, artistic and interesting place. It’s my hope that my voice will inspire you to support them in all their endeavors. Hit them up at utahfilmcenter.org to see a list of all the great programs they offer.