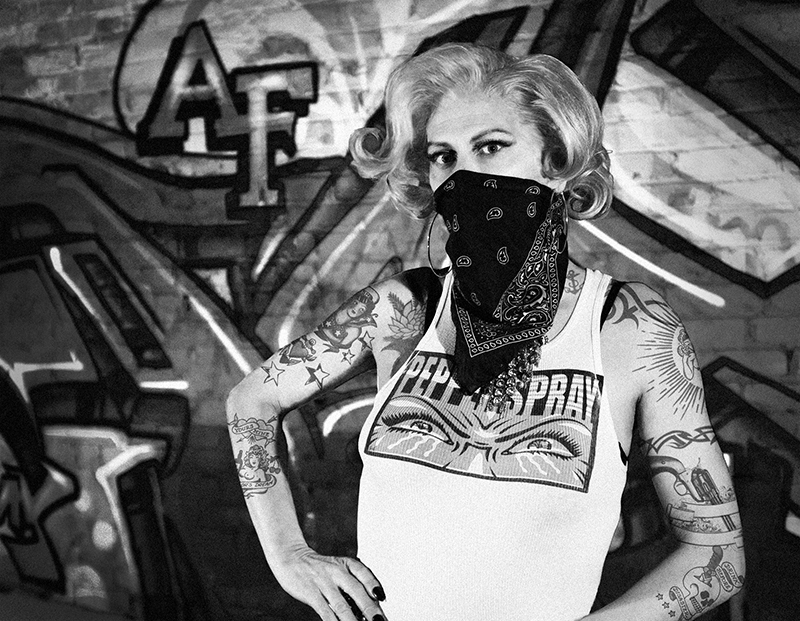 I have a motto: “If I don’t love me, nobody will.” Without trying to sound like a total douche, I have acquired a certain amount of notoriety. It doesn’t just come to you—you have to work for it. I am truly grateful for whatever fame I have. I’ve worked really hard in my life to be a “personality,” and with hard work has come reward and opportunity that I can’t even begin to thank the universe for throwing my way. I want to publicly say, especially to you and my close friends, that I love you way more than you love me.

At one point in my life, I was bouncing from one metropolitan city to another, all over the world, and there wasn’t one club I couldn’t get into. I was the clubbing tranny rocker—I was super young and wild and crazy. I was Lindsay Lohan and Anna Nicole Smith (who also was a dear friend) rolled into one. I sang in bands, performed in rock operas, acted in independent films, lip-synced at the hottest night clubs around the world, flew on private jets full of cocaine, and go-go danced in music videos in Germany. I was on TV in Iceland, and I did ecstasy with a real princess (I’ll tell you who if you ask me). I’ve been to the Oscars, sat on Hugh Heffner’s lap and walked down runways—none of which means anything, really, ‘cause like they say, you’re only as hot as your latest endeavor.

I’m a party girl, a socialite, a celebrity. I am an attention-seeking whore. There are no tutorials on how to be celebrity, so it’s not like I was able to read up. Be present and show up is the first lesson. I make sure that I walk into a room with a presence, and trust me, everyone knows when I’ve arrived. Confidence is a must. However, you have to live with everyone assuming that you’re a cunt. Even though I practice catching flies with sugar, I won’t hesitate to put you in your place if I feel disrespected. I have heard rumors that I was run out of SLC in the ’90s, that I have a drug problem, that I have AIDS and, my fave, that I’m a trust fund kid—rumors are fun! But the moment I knew I was loved was after a show in front of 1,500 people in a large venue in SF. I was dying inside! I’d never performed in front of that many people. When I was done, the crowd went insane with applause—I swear I nearly blacked out. From that moment, I was addicted and willing to not only do what I had to do to keep it coming, but I could also live with the backlash.

As of late, I’ve been getting recognized a lot from my column. This is largely due to the photo attached to each one. It’s my “thing”—you gotta have a thing. I couldn’t just be anonymous—I like to be recognized for my work, literally. I have spent my life having my photo taken. I know what is good, how it should be lit and from which angle the shot should be taken. The photo is just as important as the words, and on some level, even more. I have people tell me they get SLUG to see what my photo is first and then read the writing. SLUG and the troupe of photographers are bitchin’ at helping me with this monthly art project.

With the celebrity comes the awesomeness of opened doors with red carpets and all those bells and whistles, but behind the velvet ropes, there are dark sides. I’ve had two boyfriends who, I later found out, were in it for the social climbing. It hurt so bad that, to this day, I can’t have a relationship without questioning motives.

At times, I also wish I had invisibility super powers. If I could be invisible to go to the grocery store and run errands, that would be awesome— ‘cause there is nothing worse than getting hangover food with day-old bar hair and bloodshot eyes and having a fellow shopper recognize you. The last thing I hate about fame is that it really can be a bit lonely. People think you always have some fabulous thing planned at all times, so you don’t get a lot of calls and you worry about stupid shit, like how it looks to show up places alone.

I guess the only thing I care about is that I’m able to leave a mark posthumously. I hope there is one thing I do in this life that I get recognized for and that lives on forever, like Marilyn Monroe, for example. She has that phenomenal legend status that makes her more famous as the years go by. She’s been dead some 50 years, and still appears on T-shirts and posters, but has been given an update with designer skinny jeans and tattoos. That’s fame!

I have no delusions that I am or ever will be Marilyn Monroe—I don’t really think I’m a celebrity, but I am recognizable, and there’s nothing I love more than people coming up and saying, “Hey, you’re Princess Kennedy, huh? I love and never miss your column in SLUG.”

Thank you—you’re the reason I do it.