00:00 / 16:39
Spotify Stitcher
RSS Feed
Share
Link
Embed
It’s summer in Salt Lake City, and you know what that means: flea markets! Salt Lake City is lucky enough to have two really cool and really different markets: the Urban Flea Market, started by Kate Wheadon and Michael Sanders, and the Salty Streets Flea Market, started by SLUG’s very own Karamea Puriri and her buddy Audrey Gallegos. While one is a flea market and the other is more of a down-home gypsy market, they both serve a purpose. 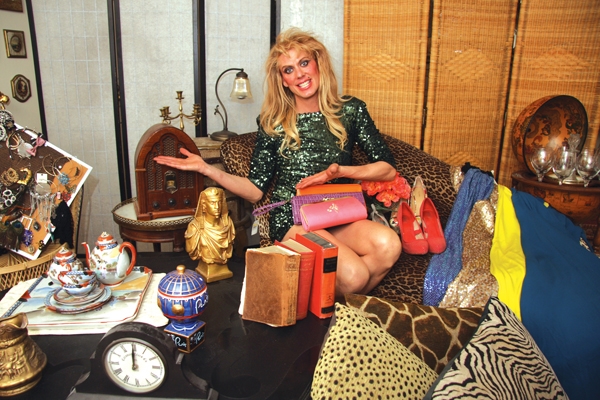 All this could be yours if the price is right. Photo: John Barkiple

It’s summer in Salt Lake City, and you know what that means: flea markets! I love flea markets. I was filled with envy every time I went to one in California or New York, and even more so when I visited Europe—theirs are the best. I got the coolest Third Reich helmet with a spike on it in an Amsterdam market. Of course, I don’t idealize or support the Aryan cause, but you have to admit they had impeccable fashion taste. I’ve fantasized about going to the world’s largest flea market, called the 127 Corridor Sale. It happens the first weekend of August and spans 690 miles from Michigan to Alabama down Highway 127. Can you imagine the trash you would come across? And I’m just talking about the people. I have furnished houses, filled closets and spent many a rent check because of my sheer love of other people’s junk, and now I can shop all summer long right here in my own backyard.

Up until just a couple years ago, all we had were the Redwood Road Swap Meet and the Utah State Fairgrounds Swap Meet on North Temple. The Redwood Road Swap Meet is in the old drive-in movie lot and has been around for years, but it is really weird. This is the place to go if you need a 500-pack of Dixie cups, an industrial super-duper size roll of duct tape, any electronic that was made in Taiwan, Chinese stars or pepper spray. I popped down there and it was like one chicken and one child in a diaper away from a third world country. The State Fairgrounds Swap Meet was pretty cool: This very typical market went bust after 20-plus years because, let’s face it, we who live downtown and on the East Side don’t venture west.

Times change, and the call for more updated and convenient markets has been answered not once, but twice. Salt Lake City is lucky enough to have two really cool and really different markets: the Urban Flea Market, started by Kate Wheadon and Michael Sanders, and the Salty Streets Flea Market, started by SLUG’s very own Karamea Puriri and her buddy Audrey Gallegos. While one is a flea market and the other is more of a down-home gypsy market, they both serve a purpose. Let me explain.

Salty Streets is really cool and marketed to a younger set. It takes place down on Kilby Court, which is not only a music venue, but actually the name of the street that houses it—in case you live under a rock. It’s very bohemian and it isn’t just a flea market, thus the term “gypsy market.” It ranges from vendors of previously loved items to craft vendors, handmade jewelry made by an adorable 8-year-old, and I even saw a booth set up for haircuts at the first couple of markets—hmm, the girl who did that moved so maybe I’ll set up shop this year. The thing that makes this market appealing is how ultra chill and fun it is. It has become notorious for its skate ramp and live music. Since it is very highly regarded by the SLUG set, it has the crème de la crème of the local band scene, making this charming little street almost feel like a monthly street fair. It totally reflects the founders, who tell me that they started it from lack of anything else to do in April of 2010. It’s definitely a fun way to spend a Sunday.

Our other market is like Salty Streets’ big sister. The Urban Flea Market is a good old-fashioned flea market with 70-plus vendors all selling, well, stuff n’ things. This is a flea market—no crafts, no tie-dye n’ pipes shit, no animals, no weapons and no farmer’s market tables—just junk, some good, some bad. Meeting the two founders, Wheadon and Sanders, it’s easy to see why they do what they do so well—they are steeped in the culture. First of all, Wheadon has a to-die-for 1960s resort-wear wardrobe. In fact, you can spot her at the market because she’ll be in some sort of fabulous, vintage tiki-printed sundress, and Sanders is the owner of the amazing fagadashery, Now & Again, next door to the Urban Lounge. If you haven’t been there, you have to go see it because he has the best crap in his store—expensive crap, but the best quality and the coolest of the era from whence it came. Last year at the Urban Flea Market, I scored some really great jewelry, an awesome leopard-print pencil skirt and almost scored an amazing pair of classic riding boots, but alas, they were too small to cram my large lady feet in—believe me, I tried.

I think that it is amazing to have these two fairs right downtown because I, as I’m sure many of you do, live in an apartment, and the option of a yard sale is nil. I plan on seizing the opportunity to set up shop and take advantage of the crowds that are dying to buy my leopard-print chaise lounge, globe bar, steamer trunks or a pair of the hundred or so shoes I never wear. That way I can open up space in my house to go back to the markets and buy more shit to put in its place. It’s a vicious cycle, but I love it!

Check out the Urban Flea Market, starting June 10 at its new location on the corner lot of State Street and 400 South, and Salty Streets on June 17 at Kilby Court.