00:00 / 16:39
Spotify Stitcher
RSS Feed
Share
Link
Embed
At the beginning of the year, the 801 was bestowed with the honor of being named the gayest city in America by Advocate Magazine. This came as a shock to parts of the country, but, as I explained it to my friends, we have the most gays per capita, and I think all of Salt Lake already knew how gay we are. I thought that since you are surrounded by gays on every side, Professor Princess could help you converse with us LGBTQs and teach you the new Polari: Gaybonics. 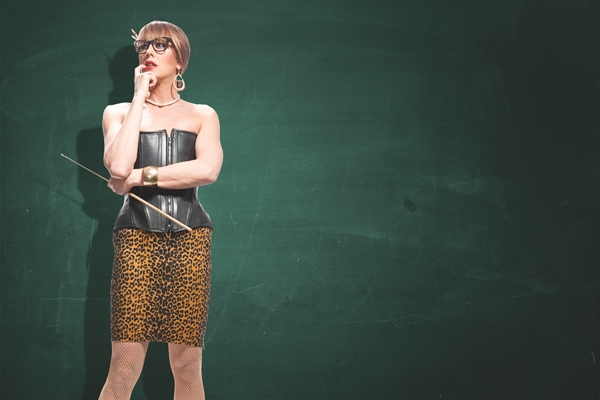 “You best have brought your library card because you’re about to get read!” Photo: Chad Kirkland

t the beginning of the year, the 801 was bestowed with the honor of being named the gayest city in America by Advocate Magazine. This came as a shock to parts of the country, but, as I explained it to my friends, though it’s true that we have less of a night-life presence than NY or LA—we don’t have the tourist trade to pack our bars every night—we have the most gays per capita, and I think all of Salt Lake already knew how gay we are.

The gays coined the term “gay” themselves in an old form of gay speak called Polari. It has nothing to do with being happy at all because I know some bitter Marys, honey, so gay ain’t nothin’ to do with cheerful funny people. It’s an acronym for “Good As You.” It’s ironic that it should come to our fair city, as it’s the one statement Salt Lake has been trying to convey for a hundred plus years, from Mormon, to gay, we are just as good and getting better than the rest.
Polari was a form of communication devised as part of a secret coded language amongst the homos starting in London in the early 20th century. I picture Oscar Wilde bantering Polari at the cafés, using words like everyone uses today—basic English slang like butch, trolling, basket, campy, drag. Back then, bummin’ across Europe had a totally different meaning.

The vernacular has roots in Italian, Yiddish, Gypsy and circus slang, and it is said that listening to a Polari conversation was literally like listening to a foreign language. It’s no wonder, because the harsh punishments that came from being an abomination in the public eye demanded discretion. Its popularity continued up until the later 1960s, when the gay revolution took hold and Polari fell out of favor.
I thought that since you are surrounded by gays on every side, Professor Princess could help you converse with us LGBTQs and teach you the new Polari: Gaybonics.

We actually still use words from old Polari such as hoofin’—to go dancing, crimper—hairdresser (although the term hair burner is becoming more en vogue) and trade—who you picked up last night, such as, “Johnny is into rough/black trade.”

Here are a few more words you can drop with your gay friends to up your gay street cred.

Who we are:
Within the gay subculture there are subsections, all with labels. “Twink” is a cute young gay. In old Polari, the term was “chicken” until the 1990s when the Brits came up with the term “twinkie” a smooth-bodied, starry-eyed boy, short for “twinkle toes.” There are trannys, of course, and a lot of gays refer to each other as queens. There are muscle queens, who are the big buff gym bunnies; bears, the big fat hairy guys; and leather men, who look like bikers and are actually linked very closely to the bears for some reason. On the lady side, there are butchies and fems, who can also be called lipsticks. Other words to describe them are luppies and lezzy professionals, and family-oriented ladies are dykes with tykes.

What we do:
If we are specifically on the hunt for a one-night hook up, it’s called “cruising.” We travel in “gaggles” and when we dance, we twirl ’round the dance floor. If I look good, my friends tell me to “work it out, Mary.” If you say something stupid, I don’t like you or I feel like being mean: “I’ma read you for filth”—I’m going to embarrass you publicly. For example, Friend: “I just got my hair done.” Me: “By whom, Helen Keller?” You can prepare the recipient with a precursor of, “You best have brought your library card because you’re about to get read!”

Sexually, there are terms like top and bottom, which are self-explanatory, but there are butch tops and hungry bottoms, or power bottoms, which are boys who take it hard and long, and are usually size queens. Oh, here’s a good “read” for a bossy friend: “Queen, stop being such a party pass around bossy bottom!” Another sexual gay thing you’ve never heard of: docking. It’s where you and your partner encase your uncut cocks like two balloon ends and jack off.
What you can’t get away with:
No snapping. It was once practiced after a “read,” but has simply been replaced with the word “snap” and done with a slight bobbing of the head. Don’t tell us you have a gay cousin/friend—we’re gay, not black.  Straight people are NOT allowed to say fag or queer, but we definitely are. Never lisp when imitating a gay, you’ll ruffle feathers and it’s flawed.  Above all, don’t say fierce, it sounds like “groovy” to us when straight people say it.

I could go on and on and on, but I will stop here to let it sink in. At least now you’re armed with enough info to help keep you in the fruit loop of any conversation you happen across at the tearoom.
Good luck and stay fierce, Miss Thing.