00:00 / 16:39
Spotify Stitcher
RSS Feed
Share
Link
Embed
One of the things that I hear the most from my out-of-town guests is how amazed they are by the sheer number of tattooed people in the 801. We all know that the number of tattoo parlors alone is overwhelming, but I think we live in such an inked-up community that we don’t really notice. I think one of the reasons for all the body art is simply the determination of a good 80% of us to make sure people know we are not Mormon—at least, that was the case for me. 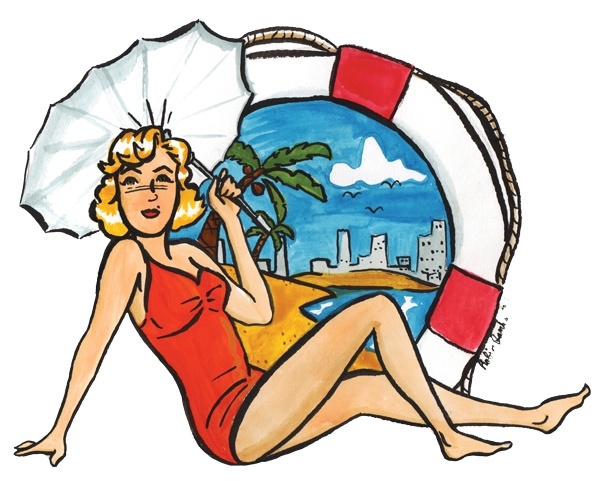 ne of the things that I hear the most from my out-of-town guests is how amazed they are by the sheer number of tattooed people in the 801. We all know that the number of tattoo parlors alone is overwhelming, but I think we live in such an inked-up community that we don’t really notice. When I was getting my first tattoos, this was not the case. I think one of the reasons for all the body art is simply the determination of a good 80% of us to make sure people know we are not Mormon—at least, that was the case for me.

I got my first tattoo at a shop on State Street that I think is now gone. I can’t remember exactly where it was because it was over 20 years ago. It was the day after my 18th birthday, and at the time, I had an obsession with Marilyn Monroe and decided to immortalize my heroine with her lips on my butt, right next to a preexisting mole. Of course, back in the day, a little gay boy going into an ink shop and asking for lips on his ass was probably out of anyone’s comfort zone, so I think I was pawned off on the new guy, and it kind of looks as such. The lips are just a little “off”—they sort of look like Marilyn’s, but also like a Rocky Horror/Rolling Stones mash-up. In any case, it’s here to stay, and I don’t really know of anyone who thinks their first tattoo is the best.

Shortly after getting my first, I was tanning in the backyard, and, as I pranced back through the house in my Speedo for a pee break, my mother stopped me dead in my tracks with a, “What is that on your bum, mister?!” I told her it was a birthmark from where God kissed my ass. That went over really well, as you can imagine, and then came the lecture. “Your body is a temple,” Mom repeated over and over. “Would you go downtown and spray paint the temple?” The answer was, of course, I would, and that was it: I was determined to adorn this temple with so much ink that no one would ever mistake me for a Mormon.

To date, I have four tattoos, most of which are in places that you can’t see unless I want you to. I have the aforementioned kiss, a tramp stamp that is a sun (of course), my twin sister as a pin-up girl on my hip and the one I hate the most—an Alaskan tribal symbol on my chest by the right shoulder. I wrote a few issues back about being fired from a television show because of it. Done in mostly black ink, it’s too hard to cover, and it sticks out like a red-headed stepchild over my strapless dresses. To its credit, I once worked a party for Mattel in San Fran, and they gave me a Princess Kennedy Barbie as a special gift that came with a sheet of fake tattoos “For you and Kennedy to enjoy.” It’s pretty cool.

I get it when people talk about their tattoos being a road map of their life, but my chest tattoo is a reminder that I took a detour to Retardsville along the way. I thought it would look really cool if I got a bunch of intertwined Alaskan tribal symbols all clustered together, starting on my chest and eventually sleeved down my arm. Fortunately, I moved to France for school shortly after I got it started and was never able to finish. Thank God, because if I hate the three inches it is now, I would be considering amputation if I had it sleeved.

I have researched a lot for a solution to this eyesore. I would love to have it removed, a costly and painful alternative, but they say it will leave a scar in the shape of the inky doodle. My other option was to have it covered. I came up with a brilliant plan to have it masked with a beautiful butterfly. This would be a tribute to my own metamorphosis that is my life. However, when I went in for the consultation, the artist told me a butterfly wouldn’t work as a cover-up. I didn’t want to compound the problem with another tattoo I would regret. I had to remind myself that getting the tattoo covered would not make me happy, and, in fact, I like being the one without the tattoos. Not being colored-up actually makes me stand out among my friends, so I think the solution will be in the removal. I guess I had better start saving.

As my tats go, I am content with the others, probably because I don’t have to look at them all the time—it could be worse, a lot worse. There’s a homeless street punk-wigger that I have seen around on the streets in San Francisco, and written across his forehead is “FUCK DA POLICE” in all caps. Must be fun when he comes across law enforcement. Every time I see him, I think, “Sheesh! I’ll live with the choices I’ve made—they could be worse.” Fuck da police? Hahaha, what a dumbass!