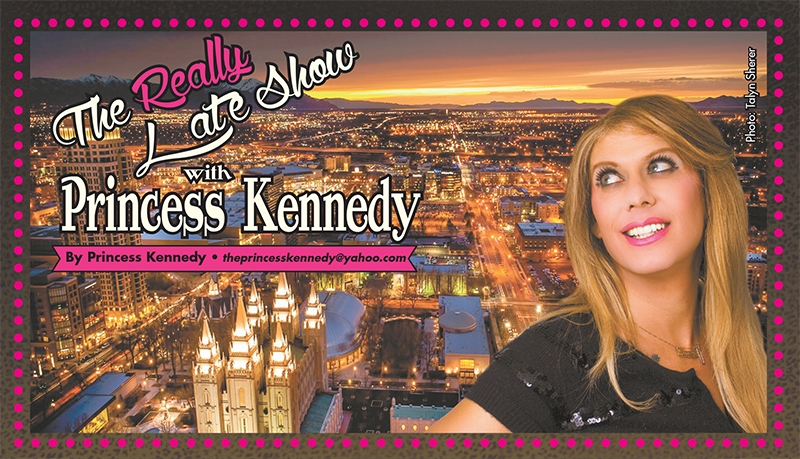 Witty? Check. Charming? Check. Pretty? Check. Princess Kennedy has what it takes to host a TV show, so give her one already, dammit!
Photo: Talyn Sherer

I’ve decided it’s about time I get my own talk show. To the TV station powers that be: I’m witty, charming and pretty—and classically trained for acting on camera. Hit me up for a full list of credentials. Aside from predicting that I’d be a great television personality, I think I have the deep appreciation for our “pretty great state” (which, in my opinion, is a self-deprecating motto) that comes from my constant travel outside of it.

Anyone who might follow my life and times will know that I just spent the winter away from Utah. I used the excuse of escaping the snow and inversion to go coastal for a couple months and work on a book that I’m writing. I ended up with a really great opportunity to house-sit for someone in Santa Cruz, and the experience left a rather salty-aired taste in my mouth. Here’s a little secret to California: Anywhere you go that’s not Los Angeles or San Francisco is full of nothing but right-wing, gun-rack-sporting assholes, and that’s all I will say on the matter.

I never thought I’d live to see the day that I loved Salt Lake City and bashed California. I spent so much of my youth hating it here that I never really took the time to appreciate its finer points. Aside from the luxury of missing the snow days and being able to breathe, I spend probably 90 percent of those 10 weeks hating where I was and missing my home.

OK, so if I had a talk show or TV spot of some sort, I would definitely incorporate my “Top 10” lists of things and stuff. Let’s pretend for one moment that I do have a show and I’ll give you a preview of the Top 10 things I love and missed most about SLC.

1: This one is a no-brainer: the mountains and scenery. It’s true that SLC, despite being landlocked, has some of the most beautiful, diverse and expansive terrain of any other city in the world. I mean, Hollywood figured that out a long time ago.

2: Speaking of diversity, the geography isn’t the only thing unique to SLC. We are living in a state that battles on the forefront of politics—most currently, the whole equality issue. It sucked bad enough that I left in the midst of the gay marriage thing, but had I been here, it would have been the Capitol 14.

This one I catch a lot of flak for: the sheer amount of beautiful people we have in our city. It’s this weird phenomenon, and if you have spent any time outside the state, you’ve noticed. Outside of Utah, everyone just looks like the cross-eyed, redheaded stepchild in comparison to our beauties.

I’ve written before that Salt Lake has more tattooed people than any other city. Not only that—they are fabulously inked. A large percentage of people in other states who are tatted are fat, greasy rockabilly rejects.

From a young age, Utahrds are taught to excel in the arts, especially music. Yes, there are cities with great music scenes, but if you go to a live show in California, they are these gross, Orange County–sounding, pop punk, frat boy rejects who wouldn’t even comprehend the amazing stuff we pump out here.

6: The foodies. I’m in love with the fantastic food and concepts popping up in the city. Forage, Finca and Pallet are some of my local faves, but the thing I missed most was Crown Burger’s fry sauce.

7: My friends, the Tranimals. The ladies of SLC’s Bad Kids Collective have taken a national pastime and embraced the fuck out of it. Their outrageous fashion and personas rank with and even excel their big-city counterparts. Every drag show I went to in both LA and SF left me bored.

9: The layout of the city and the bicycle community. I hate biking in other places. We are so spoiled to have the big roads we do and, as a whole, I feel I get respected by cars more here.

10: It’s pretty apparent that I was left feeling really homesick, but the Number One thing I missed was my heart. I definitely leave it here whenever I travel (just to clear up any rumors of me leaving SLC permanently).

The only thing that really bites my ass about the city is that people are so quick to knock it. I just HATE hearing locals say that Utah sucks. The one thing I would bring back home from the community of Santa Cruz is their hometown pride. You can’t go anywhere without seeing most of the locals sporting SC merch. To those who bitch about where we live, leave for a couple months. It’s totes true—absence makes the heart grow fonder.

If I were to get that talk show, I’d be steadfast to change our state motto (and haters’ minds) by calling it: Hello Utah, you’re pretty fucking great!