Starting this month through January, the UMFA is featuring the photographic work and video performance art of Samoan-born artist Shigeyuki Kihara, aka Yuki. 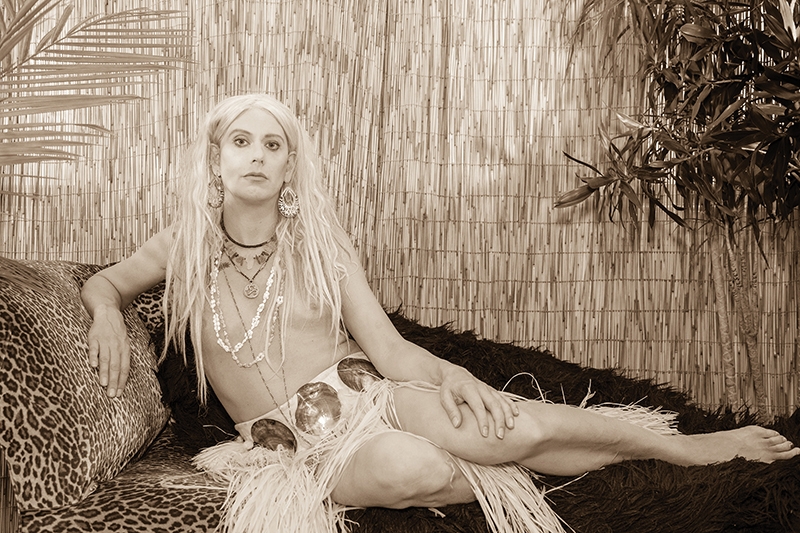 
During research while in college, Yuki came across Victorian photos of Fa’afafine (fa-AH-fa-feeneh), which is how she identifies herself, in not only traditional island drag, but in Victorian mourning costumes. Both have heavily influenced her art, which largely centers around Samoan culture. Oh, you don’t know what a Fa’afafine is? Well, darling, let me fill you in!


Many cultures across the globe had/have a term and purpose for what translates to the “third gender,” or “tranny,” as I say. In Samoa, they don’t use the terms “gay” or “homosexual,” because those of the third gender––free to have sex with both males and females––are called Fa’afafine. Before I go on, I must pass on the news that our American term, “tranny,” is no longer a word we are supposed to use––some find it offensive. The Evil Kennedy says fuck ‘em, and the Princess says we have to respect that ever-tiresome PC that follows us around like a big thundercloud on a pool day. I get that some straight guy at Cheers to You (or the like) calling me a “fucking tranny” is impolite, but I helped bring the term tranny into the regular vernacular of this Salty City, and now they’re taking it away?!


In my research, I found several cultures who have had this understanding of the third sex. Most of the Pacific Islanders and a good percentage of Native American tribes had the berdaches, or Two-Spirit people: female and, in some cases, male tribe members with reversed gender roles. They took on the responsibility of the alternate sex, having the widowers of the tribes marry trannies so they could raise the children and not produce more. In one case, I found that sleeping with them before battle would bring new warriors good luck (I die). They were largely considered the wise people, or the shamans and medicine people, until the Catholics came, were freaked out by the fags in the dresses and burned them as witches. That pretty much built the path to the mental disorder it has become today––mmmm, history.


I long for those days that we were revered as the wise people. My Instagram tag is @sumdumtranny because I overheard one gay explain to another gay in a coffee line that my column belonged to “some dumb tranny.” You have to spin these sort of putdowns because if you don’t, the bullies win.


Initially, I had a pretty sterile start to this month’s column, planning to have Yuki dish on her art and form, but being the wise Fa’afafine that she is, she sparked a whole new direction for me. I told her of my interest in writing about the show, explained my column and how part of it was the photo included—a re-creation of one of her photos—and this was her response: “I suggest an interesting conversation between us would be: What does it mean for a non-indigenous queer person to dress as an indigenous queer person in a portrait? Because your country lives in an era where it is no longer acceptable for white people to appear in black minstrel make up, then how does this apply to Pacific Islanders?”


I was completely fascinated by the openness in her prompt, and, at the same time, I was taken aback by the fact this had never crossed my mind. Was it racist for me to imitate her photo? I understand how our country’s politics are a little baffling and hypocritical, especially to someone who is looking in from the outside. I’ve definitely been subject to the kind of discrimination that results from our country’s skewed perception of social norms. As a result, I understand the importance of turning a negative into a positive, and taking the hate out of it. In answer to Yuki’s question, I believe it’s possible, if done tastefully. At Trannyshack, the club where I performed for years, our shows were based around shock value and taking back negative terms and stereotypes. After being picketed by the NAACP for doing “Wetback Night” (hosted by a Mexican person) and “Mammyshack” (hosted by a black queen), the shows were packed to the rafters every Tuesday for 10 years from the publicity.


I refuse to live my life under an umbrella of political correctness. With it, we lose art, expression and a certain amount of freedom. Long live the tranny (and the Fa’afafine)!


In my correspondence with Yuki, I asked, “In this world of political drag and people exploring their art, where do we draw the line?” As simply as her wise ancestors would answer this, the Fa’afafine replied, “That is not for me to decide, but within the artist themselves.” Don’t be a dumb tranny. See her art at the UMFA and make sure to catch the opening performance on Oct. 23, with an artist talk on Oct. 24, both free to the public. You can also get glimpses of the exhibition for free if you show up to the UMFA on Aug. 21 from 6 p.m.–8 p.m. for Equality Utah’s town hall series, where they will be discussing transgender issues in our community.