SLUG Mag Soundwaves
Episode #395 – Cotes
00:00 / 18:06
Spotify Stitcher
RSS Feed
Share
Link
Embed
Holy skid marks, Batman! On June 3, SLUG celebrates LGBTQ Pride. It’s safe to say it’s easily the most extravagant SLUG event of the year. We’ve put a lot of effort into our past contingents, and this year will be no different. SLUG people are people of tolerance who fight for the rights and safety of all. We will shout this out from the streets on Pride and we want all that heed this call to help us on our super hero-themed float.

Princess Kennedy: We Can Be Queeroes, Just For One Day 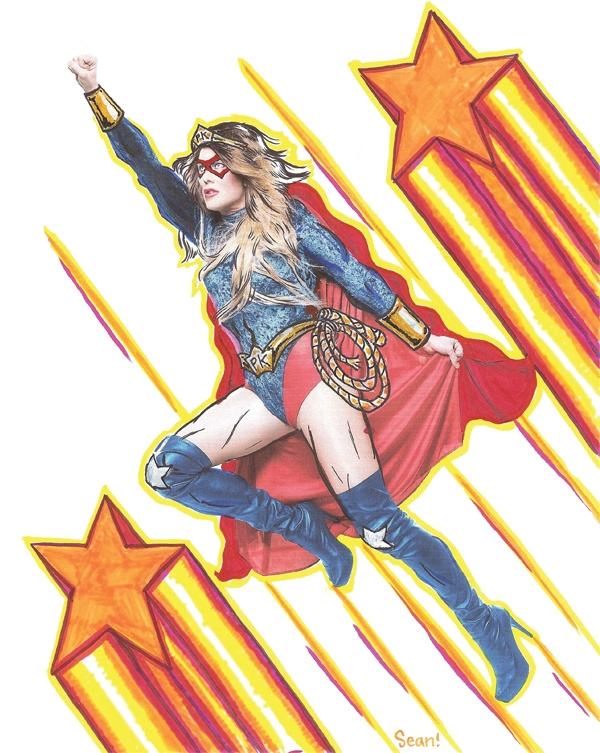 As the spring thaw races across the capital city of Salt, electricity fills the air. Citizens of the metropolis busy themselves with body shaping, outfit and merriment planning.

Meanwhile …
at SLUG headquarters, it’s all hands on deck, feverishly anticipating the Day of Pride.

H.B.I.C. (Head Bitch In Charge) Angela Brown, aka “The Chief,” has summoned her oracle to the gay underground, Kennedy, Princess of Ferocity. Using her razor-sharp tongue, wit of lightning speed and seasoned abilities, The Princess is instructed to devise a plan to bring her faithful followers and join forces on Pride Day with the SLUG team, together sending a message to the evil doers of the Nay Say.

Holy skid marks, Batman! I am having the pangs of anal leakage I had as a child in the days leading up to Stake Lagoon Day. On June 3, SLUG celebrates LGBTQ Pride. It’s safe to say it’s easily the most extravagant SLUG event of the year. We’ve put a lot of effort into our past contingents, and this year will be no different. When asked my thoughts as to what would be a fun theme, I reflected on the past year in the 801 and which events impacted my bowels the most. Hands down, it was the hate crimes that swept Salt Lake City at 2011’s close. In a span of weeks, there were several gay bashings that left the community on edge.

POW* We will not tolerate injustice!
BANG* Hate is unacceptable!
WAP* We will overcome the inferior race of Small Mind!
BAM* We are SUPER QUEEROES!

These hate crimes were all over the media and seemed to have passed, but I am here to tell you: It happens almost daily. What’s worse is that it happens where we hang—villains come to our bars and hoods looking to “beat up fags.”

Say what you will about circumstance and rumors that swirled around in the months after the most publicized bashing, but what rang true was the good that came: support, community, awareness of senseless violence and a call to end hate from every facet at large—not just within the LGBTQ community, but from straights, the police, different faiths—even KSL came out in support. Offers came for self-defense classes, from gun safety to boxing—super heroes helping us find our hero within. It’s really important to me that SLUG readers step up and be super heroes for those you might see in a sketchy situation—it’s cliché, but “see something, say something.” I have always felt nothing but love and support from my SLUG peeps, and I want the gay community to know that you’re not the douchebag who made fun of them in high school. SLUG people are people of tolerance who fight for the rights and safety of all. We will shout this out from the streets on Pride and we want all that heed this call to help us on our super hero-themed float.

The idea is to create your own super hero (although you won’t be turned away if you’re dressed like one of the Avengers). I’m pretty sure that we are all geeky enough to create our own, ie: Cap’n Nut Sack, El Homo Diablo or Uniboob. Coming up with the name is the hardest part—then the costume will be easy. For you boys, I suggest that you go to I Kim in Sugarhouse, where they have an array of colored leggings. Next, cut a hole in crotch, pull your dick through and apply a cock ring purchased from Mischievous. Over that, sport a pair of basket-enhancing undies from Spark—indulge me honey, I’ll be staring at your package all day long anyway. Speaking of which, Cheese, I’m searching for Spiderman underoos for you to sport on your skateboard—my spidey sense is tingling!

In the planning of my own meta-human, I realized the strong similarities to my first idol, Wonder Woman. We’re both Amazonian princesses with killer legs and flawless hair. We assimilate in society until we are needed, then we twirl out all the stops with a to-die-for wardrobe that fits any occasion. As for accessories, I love the bullet-proof bracelets, lasso of truth and boomerang tiara, which are all gifts from our motherland of Paradise Island. However, Wonder Tranny sounds like some sort of automotive special, so I’ll stick with The Princess.

Lest ye be reminded, SLUG is a two-time Pride float award winner, and 2012 will be no exception. In addition to our usual band of SLUG Queeroes, the real life super heroes of S.I.N. —Safety In Numbers—a troupe of costumed, super hot gay boys that patrol the nightclub parking lots to ensure the safety and good time of all and my ever-growing hotly crew, The Kennedolls, will faithfully be marching behind their fearless Princess and the SLUG float. Couldn’t you just Kennediarrhea your tights?!
To unite with us, you will need to buy a limited edition SLUG Super Queeroes Pride Pack, which will include a T-shirt, mask and cape for $10. As always, we encourage bikes, boards and skates—villains need not apply.

Let it be said from this day forth—equality, justice and the right to party on Pride Day will forever be defended by SLUG Mag and Super Queeroes everywhere!

Are you interested in being a part of SLUG Mag’s float for the Utah Pride Festival Parade next Sunday, June 3? Join our league of Superqueeroes today. Email [email protected] to get involved.