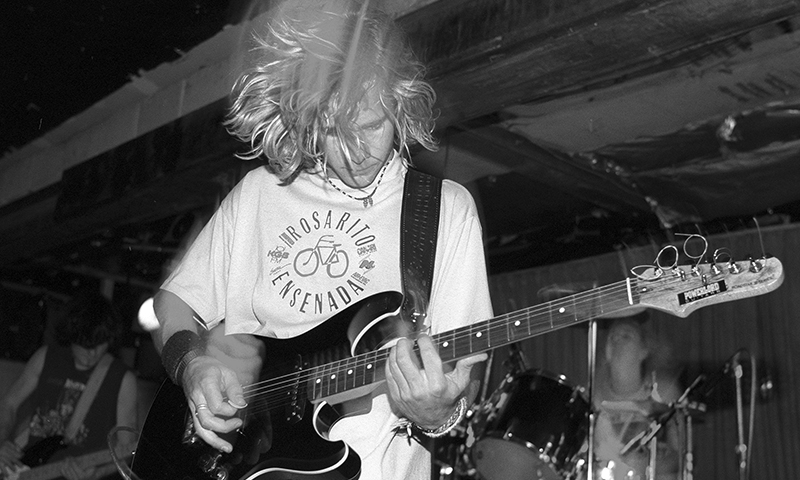 The Stench at the Speedway Cafe.

Recollections of an Innocent Bystander

My first taste of the Salt Lake music scene was back in the summer of 1987, when I was just 14 years old. It was at the old Alice’s Cafe, a place whose name had graced many flyers around town advertising punk bands, both local and beyond. I went to see 7 Seconds, who was not only my favorite band at the time, but also one of the first punk bands whose records I started to collect. What I didn’t expect was the loud energy of the local bands that opened the show. If my memory serves me correctly, it started out with B.F.D. and Draize Method (from Ogden), both of which were familiar names within the local scene at the time. This was my first time seeing punk music in a live setting, and this show set the bar pretty high in terms of what local bands were capable of. It was raw, loud and angry, and the crowd interacted by dancing in the “pit.” As a place to see live music, Alice’s was exactly what I had expected; not much to look at inside or out, a few random video games, a decent-size stage, and bathrooms to fear for your life in. As intimidating as it was to a kid that never left the suburbs, this place had an excitement that I couldn’t describe. Punks, longhaired rockers, gothic kids, jocks and just plain, normal folk all stood, in the same room and actually enjoyed each other’s company. It was a cool vibe; much different from the cliquish environment of the public school system that most of us endured growing up. Somehow I knew that this group of people made up a small but strong faction of the creative population in Salt Lake, people who were willing to express themselves, be outspoken, and yet feel a part of a supportive community of art and music, which at that time was still so left of center in Utah’s conservative community.

After this night, I knew how I wanted to spend a good deal of my free time as a teenager. So I sought out the live shows and bought or borrowed records of local bands like Maimed For Life, The Stench and L.D.S. (the punk band, not the religion) and started to listen to the homegrown talent that would inevitably breed some of my favorite bands. I would spend my Saturdays scanning record bins at the original Cosmic Aeroplane on South Temple, and then walk or skateboard down to the Positively Fourth area to talk music with Brad Collins at the first (and still the coolest) locale of Raunch Records. I would grab free local magazines like the Private Eye and various others, many of which were photocopied rags done by musicians or artists. SLUG Magazine, in its true form, was still a year away from being launched, so these small DIY magazines were what bands used for advertising local shows, along with plastering flyers and posters everywhere they could. If I ever needed more ideas on cool, new music, I could always tune into the late-night programming on KRCL’s Saturday lineup, to hear everything from British political punk, to Japanese noise bands, and everything in between. Where else would I hear this, outside of suggestions from my record-collecting friends? And yet, I had accessibility to all this counterculture, long before I had a driver’s license.

Speed up to 1989, the year that I not only went to more local shows, but actually played some as well. If I was not rehearsing with my “straight-edge” band, I was cruising down to the Word or the Speedway Cafe every weekend. There, we would hang out with many of our friends, and enjoy bands like Mudhoney, DRI, Bad Brains and Uniform Choice, among others who we all loved to listen to, all of which would play for measly ticket prices, sometimes to full-house crowds, sometimes to 20 or 30 people.

This level of support was also given to many of the better-known local acts as well. I can recall many times where I was pushing through the crowd at a sold-out Stench show at the Word, or seeing Insight and Better Way egg on the crowd into dog-pile sing-a longs. I remember seeing Gnawing Suspicion open up for Hate X 9 and wondering if I was going to get punched for being in the “pit.” There was the time where Leadfellow and House of Cards opened up for Fugazi’s first Speedway show, or a Terrance D.H.-led Bad Yodelers opening up for 7 Seconds (the third time I’d seen Kevin Seconds and crew), and I found myself up front each time, cheering on the locals as loud as anyone else. All these bands had equal amounts of creativity and style, parallel and sometime surpassing the headliners that they were so lucky to open up for. And yet, there was still a certain amount of modesty, or even humility, that all these bands expressed at one time or another. There was little ego-tripping to be had and very little “competition” between musicians. The “scene” encompassed many different styles and welcomed people of all walks of life. We all supported the scene, because we knew how vital it was to have these outlets of creativity. It kept many of us out of trouble, and fostered many great musical talents, many of which are still playing around town today, albeit in different incarnations or musical genres.

1989 was also the year that I started contributing to SLUG as it moved from its original Xeroxed look to the more expansive newsprint format. I would talk to JR Ruppel (the originator of SLUG) while I hung out at various Word shows, and ask him what shows were coming, and if he needed someone to review them, which he always did. Whether it was a small review of some obscure album I picked up, or some photos from one of many local shows I attended, I somehow managed to send what I could to contribute to the latest issue of SLUG. I’ll admit I just liked to see something I wrote or photographed in print, but on a larger scale, I felt that my contributions, however small or spread out, were helping the bands somehow, in terms of notoriety or hype. While I was never an “official” staff writer, I continued to send in what I could off and on for the next five years.

I had a lot of good times then, all of which didn’t involve sneaking into bars for the sake of live music .We, as a collective community of artists, musicians and supporters, had the resources and the accessibility to great talent. We supported it as strongly back then as we do today. The venues have changed many times over the past 20 years, but the drive to create is still there, regardless of any financial success or national exposure the bands may or may not get playing in this town. Yes, we still have the ability to attend all-ages shows, due to countless efforts by the proprietors of Kilby Court, along with many others like The Project Audio Lounge in Bountiful, Club Boom Va in Ogden, Starry Night in Provo and The Driftwood Venue in Logan. And 21+ clubs have dedication to continue booking the music, local and otherwise, because they know that people want to support it in this town (and possibly get their drink on at the same time).

As it stands, this musical community has not only maintained its creative output, but helped it grow and expand to something sustainable. Whether or not the clubs or bands will be here 20 years from now is unpredictable, but I can guarantee, as I remember from my younger years, the love and support for a strong and talented local scene will still be present.