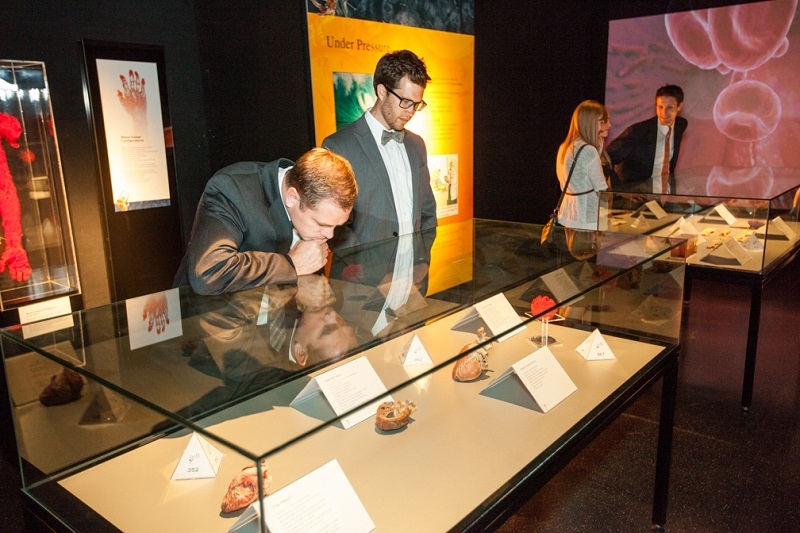 It’s exciting to think that we’re just a few short years away from actual cyborgs. The next generation of prosthetics is allowing amputees to regain arms, legs and eyes. Spinal injuries can now be bypassed the way traffic moves around an accident.

Now, these aren’t direct implications of cyborg-ness, but the thought of rehabilitation on this level is exciting. This past Friday was Bionics Night and a (surprisingly) packed house was there to listen. The Leonardo Museum hosted 4 top specialists in the field of human restoration and rehabilitation as a part of their Body Worlds exhibit, which specializes in showing all the nooks and crannies of the human body by displaying actual human bodies in all their inside-out glory. The audience was an eclectic sort and brave by weekend standards, because very few people opt to attend science lectures as part of their Friday night itinerary. Naturally, many in the audience were prosthetic users or family members of prosthetic users.
The first speaker was Dr. Richard Norman. He spoke briefly (due to time constraints) about Next Generation Prosthetics and about the new forms of communication between the neurons in the brain and an artificial limb. Essentially, a chip a quarter of the size of a penny with 100 silicon microelectrodes is plugged into the brain and when the brain thinks, “Hand, wiggle fingers,” the signal is sent to the prosthetic hand and voila—the artificial fingers wiggle. He went on to explain spinal injuries and how signals can now be sent around the damage, allowing those suffering from paralysis to have motion they once thought would never be possible.
The next speaker was Scott Bell, a Vocational Rehabilitation Counselor at Utah State Office of
Rehabilitation. Bell was unique because he was the one speaker who had a prosthetic. Bell lost his right leg bellow the knee in a zip-line accident in college. As a nationally ranked hurdler in college the process for his recovery was elaborate because he wasn’t going to take no as an answer toward any limitation. Many years after the incident, Bell functions as well as, if not better than, non-prosthetic athletes and enjoys a completely normal life. I say “better” because in 2008, prosthetics were banned from the Olympics because they offered an unfair advantage.
The third speaker, Dr. Gianluca Lazzi, has spent the last 18 years developing an artificial retina. In a glass case at the lecture they had the only artificial retina in the world on display. The contraption looked like early ’90s black Oakley sunglasses with a small camera fixed to the side. Basically, a chip is plugged into the back of the eyeball and uses electrical stimulation to bypass defective photoreceptors and stimulate remaining viable retina cells. This is the communication from lens to brain. The patients that use this device can see shades of light and detect patterns and shapes in the contrast between them. Those that have been blind their whole lives will be able to walk down streets unassisted and move freely about their homes.
The final speaker, Dr. Bala Ambati—who is the actual equivalent of Dr. Doogie Howser, having graduated med school at 17 (The youngest to date)—offered a brief overview of all the subjects addressed. Dr. Ambati expressed his excitement with all the modern advances in this field and said, “80 percent of vision problems can be fixed with technology these days.” Dr. Ambati then wrapped it up, because his lecture had gone way over time, but before he left, he opened the room up for questions.
As I mentioned before, the room was filled with people that could directly relate to these subjects. The Q & A was very involved and heartfelt because many in the audience were suffering from these concerns and were very enthusiastic about alleviating them. I posed one question to Dr. Norman, because I’m a geek and couldn’t let the option of cyborgs go. I asked, “Would the strength of the prosthetic be able to imitate the strength of the host?” He replied no and that the strength would be generic for everyone. So in light of having a super powered arm I asked, “Could the prosthetic be set to be more powerful than the host?” Dr. Norman smiled at this because he knew where I was going and said, “Of course, you could have super strength for one action—and then the rest of the day, your battery would be dead and you’d have a lifeless arm.” Chuckles were heard but I was happy to know it still could be done.
Our host for the evening, Jenny, then came out and thanked the speakers and everyone else for coming. Class was dismissed and the audience proceeded to bombard the speakers with many additional questions. The night seemed to go by in a flash, but that’s the nature of things enjoyed. Thank you to The Leonardo for setting up the event, and thanks to those involved for making it happen; it was a fantastic evening.
Photos: