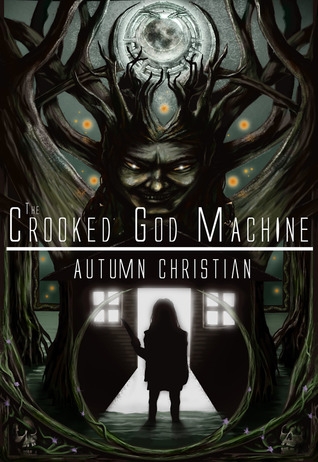 The Crooked God Machine
Autumn Christian
Self-Published
Street: 12.2311
Right off the bat: this book is not for everyone. If you can’t untie your mind and let in some seriously surreal dystopian horror wander in, you may not enjoy it. I implore you, for the good of your soul, to try, because this book is fucking fantastic. This debut novel from Autumn Christian is full of a thick, ancient darkness; Christian has a voice and a worldview unlike any author I’ve ever read, able to twist the most unexpected objects and symbols into a cohesive, unforgettable story. The book follows Charles, who lives on the Black Planet, where dead babies are fed to a swamp witch, plague machines roam across the land terrorizing the citizens with ice storms and locust swarms, and God himself is on TV in a black horned mask is on TV, nightly damning mankind and warning of the coming apocalypse. The emotional tone of the work is thick and heavy, and almost feels like a sludgy poison in your veins. And yet there is a lightness that shines through in the irrepressible hope of Charles, a hope that keeps drawing what little beauty is left in the world to him like moths to a flame, which only strengthens his hope and keeps him fighting to somehow undo the horrifying world he lives in. The imagery is unlike anything you’ll read: demented, blazingly imaginative, unsettling and unforgettable, far above par for any novel, let alone horror. Christian’s pacing has a deliciously crawling dread that builds to a somewhat abrupt ending, but it doesn’t leave the reader unsatisfied. It’s only that you, like its poor inhabitants, become completely trapped by the black planet by book’s end. –Megan Kennedy

Dancing Barefoot: The Patti Smith Story
Dave Thompson
Chicago Review Press
Street: 08.01.11
Dave Thompson’s newest rock biography on Patti Smith does something that few books of the same genre accomplish—a complete portrait of a revolutionary told mostly through her own words. Dancing Barefoot reads a bit like an in-depth Rolling Stone article, and Thompson is able to transport readers into the world of Patti Smith rather than just inform them of the details. Dancing Barefoot is almost overwhelmingly expansive. It tracks Smith’s career in painstaking detail, from her childhood as an awkward misfit in New Jersey, to the time she spent hanging out at CBGB, her early poetry readings and her eventual thrust into stardom in the New York arts scene. It’s obvious that Thompson has spent countless hours compiling this comprehensive portrait of the artist. Luckily his writing style is as engrossing as the artist herself. –Jeanette D. Moses

Encyclopedia Gothica
Liisa Ladouceur
ECW Press
Street: 10.01.11
While Ladouceur’s keen wit shows through most of the book—the introduction is one of the best things I’ve read in quite some time—there are far too many nonessential entries present in this encyclopedia to make it anything more than a novelty. For a book focused solely on Goth culture, there are simply too many entries that define things as “not Goth,” though Ladouceur does handle the main staples of “What is Goth” with affectionate love and obvious experience. The illustrations by Rue Morgue Magazine’s art director, Gary Pullin, on the other hand, are so well done, it leaves you disappointed that they only appear at the beginning of each letter. Perhaps a good gift idea, and definitely a nice introduction to the basics of Gothdom, but certainly not required reading by any means. –Johnny Logan

Iron Man: My Journey Through Heaven and Hell with Black Sabbath
Tony Iommi with T.J. Lammers
Da Capo Press
Street: 11.01.11
A leaden hodge-podge of stuff you’ve already heard from the unofficial Black Sabbath doc (what “N.I.B” stands for and how Tony lost his finger) and some obscure gems (Tony’s irrational fear of spiders and his stint in Jethro Tull) render Iron Man a lukewarm rock tome written by one of its key progenitors. Split up into forty or so quick, slice-o-life vignettes, it has a rapid-fire “quick story” quality, perfect for the ADD generation, but lousy for those fiending to dig deep. Still, Tony’s delightfully frank about the amount of coke ingested during the Vol. 4 sessions and his personal hangups with Ronnie James Dio—he just tends to avoid anything meaty. I had to keep reminding myself that it was indeed an Iommi book, not a definitive band bio, and like the late and tired ’90s Sabbath, it flounders a bit in the middle as it fruitlessly searches for anything close to a “fall-from-grace rockstar moment.” Yeah, he took a ton of drugs, but Iommi just isn’t the nihilistic type. Maybe some people dig reading about marriages and mortgages … just not this reader. The subject is fine, but it needs a better teller. Still, it’s honest, endearing and semi-informative, so in the vein of light, rock reading, seasoned Sab-fanatics could do way worse. I mean, have you heard Forbidden? –Dylan Chadwick

Mormons Under The Microscope
Ed D. Lauritsen, PHD
CFI Publishing
Street: 06.08.10
As a native to the LDS capital of the world, I like to think that I’ve grown to know quite a bit about the predominant religion in the state. Hosting friends from out of town, I get to give them the low-down on Mormons. So, I was eager to take a gander at this book to continue to develop a reasonably accurate understanding of those I’m surrounded by. Dr. Lauritsen does offer a lot of information, and to someone who already knows a bit about The Church, he seems to be low-balling a lot of the information. Rather than offering up the deep insight that I was expecting, I felt more like I was reading Mormonism for Dummies. Lauritsen tackles common questions like: “Do Mormons believe in Hell?” by providing a brief answer: “Yes, Mormons believe in Hell as revealed in the teachings of the Lord’s latter-day prophets,” and then offering a more detailed answer to reinforce his brief one. I don’t know if Dr. Lauritsen is LDS, but this book feels like it has been heavily influenced by the Church—there is no other view to offer a counter argument or to really engage the reader. It seems more like a desk reference for the non-Mormon. It feels like what a missionary might tell me if he was standing on my front porch. I would be down to send this to my curious friends around the country, but I would be sure to couple it with a copy of Pat Bagley and Sister Dottie S. Dixon’s The Mormon Kama Sutra to offer a little balance. –Ben Trentelman