00:00 / 18:49
Spotify Stitcher
RSS Feed
Share
Link
Embed
Mike Watt: On and Off Bass and Neil Young FAQ: Everything Left to Know About the Iconic and Mercurial Rocker are reviewed this month. 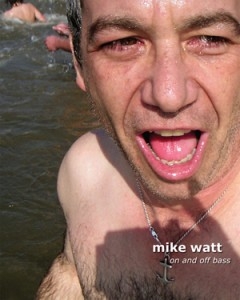 Mike Watt: On and Off Bass
Mike Watt
Three Rooms Press
Street: 05.01
Punk rock veterans from the glory days tend to age gracefully—not that they forsake the minimalist aesthetic of punk, but they use it as an oar to tread different waters. Mike Watt: On and Off Bass exhibits Minutemen-famed Mike Watt’s photography from around his home town, San Pedro, Calif., juxtaposed with journal-like excerpts from his jaunts abroad, whether it be tours or regular travel. Watt’s photos of the shore areas of San Pedro become more than arbitrarily paired with his blurbs—his shots of seals settled on manmade buoys accompany passages that convey self-determination: “My philosophy is to continue to plow.” This technique lends his photographs a sense of meaning that compounds the simplicity of material conveying images perceived from a photographer’s (inner) eye. Watt’s red-and-orange sunrise/sunset shots depict light that silhouettes barges and bridges, which accompany existential excerpts as they relate to the longevity of his own life. “I took the train out to Pinelawn Cemetery where John Coltrane was buried. I was forty then, and Coltrane died when he was forty,” reads one caption to a sunrise.  Watt’s artistic musings and deft eye provide a soothing visual-mental experience, which compels me to delve into my own home’s natural borders and reflect. –Alexander Ortega

Neil Young FAQ: Everything Left to Know About the Iconic and Mercurial Rocker
Glen Boyd
Backbeat Books
Street: 05.01
Aside from Jimmy McDonough’s biography of Neil Young, Shakey, which was published a decade ago, Neil Young FAQ is the best treasure trove of knowledge for those seeking information on Young. Boyd acknowledges that his book is not so much a biography, but more of a reference guide to Young’s career—Boyd’s writing style often repeats the same information multiple times throughout the book’s 42 chapters. Every time Danny Whitten is mentioned, it seems like Boyd has to remind readers that he overdosed on heroin after Young fired him and gave him $50 and a plane ticket home. FAQ follows a generally chronological order of Young’s life, but Boyd often transitions into opinionated chapters such as, “Piece of Crap: Five Essential Neil Young Bootlegs.” There are also a few chapters that seem rather pointless, including “Five Great Neil Young Concerts from Seattle, Washington.” FAQ may be a tough read for the casual Neil Young fan, but it is a great source for hard-to-find information on Young’s musical career. –Jory Carroll