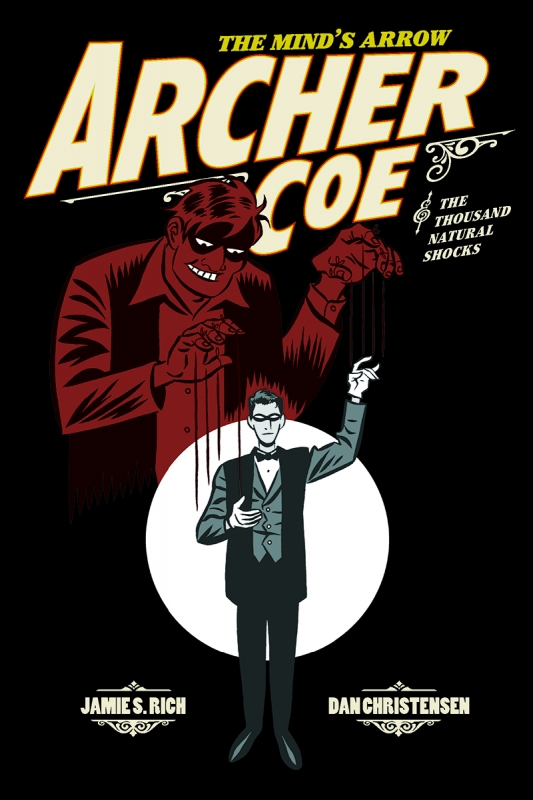 Archer Coe
Jamie S. Rich
Oni Press
Street: 06.11
Performer Archer Coe is a talented magician and master of the supernatural use of hypnotism. He uses it as a tool to earn money from the wealthy, helping one particular client with marital problems. The woman in question persistently reminds Archer that they know each other from their past and yet he can’t remember it. When her husband winds up a victim of a criminal dubbed “The Zipper,” Archer is suspect number one and must use his abilities to clear his name. The novel starts as commonly as any other mystery, but takes a turn down a mental rabbit hole—a trip down Archer’s mind—and leaves the reader wondering what is real and what is a figment of Archer’s fabricated mind. Archer Coe is definitely a character deserving of his own series, and I will never tire of noir-style comic book storytelling. Jamie Rich has created a character and story worthy of television adaptation, but it remains absolutely intriguing on page. –Rebecca Frost
City in the Desert Volume 2: The Serpent Crown
Moro Rogers
Archaia
Street: 03.11
Upon first reading, I was taken on a rollercoaster in my mind through my inventory of genre knowledge trying to pinpoint just what City in the Desert is. City in the Desert: The Serpent Crown is the second book in the a series by writer/artist Moro Rogers and does not rely on bright colors and speech bubbles filled to the brim with exposition. Moro chooses to use only three colors to detail the story and set apart important characters and thoughts. The book begins with a flashback, detailing the first encounter Irro, the main character, has with Hari, his impish sidekick. Irro is a monster hunter who is running low on work. Monsters have all but disappeared and their town of Kevala is threatened when the Spirit Fountain, the source of life for the town, is monopolized by a new and tyrannical king, both situations intertwined. The Serpent Crown leads up to a great climax and explanation only to be found in the next series of books, but the exotic-steampunk-desert-fantasy exists in a universe far more mystical than can fit in any one book. –Rebecca Frost
Diesel Sweeties Volume 2: Bacon is a Vegetable; Coffee is a Vitamin
R. Stevens
Oni Press
Street: 02.19
In the second volume of his webcomic Diesel Sweeties, R. Stevens brings plenty of beautifully retro-looking, pixelated art in each of the comics. Unfortunately, Stevens doesn’t bring much of the funny. There are some gems peppered throughout the book, but most of the comics in this volume have punch lines that are found wanting, or they contain too much wit and not enough joke—which works great in graphic novels, but less so in panel comics. The art is fantastic and fun to look through, but Stevens would do well to stop attempting one-liners and start putting these enjoyable characters into some type of storyline. You can check out all of the over 3,500 “Diesel Sweeties” webcomics at dieselsweeties.com. –John Ford