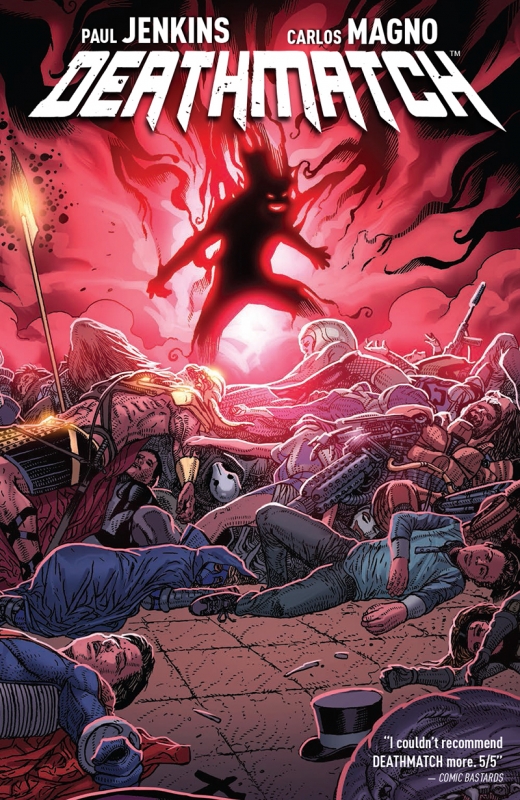 Afro-Vegan: Farm-fresh African, Caribbean and Southern Flavors Remixed
Bryant Terry
Ten Speed Press
Street: 04.08
Activist/chef Bryant Terry’s latest cookbook is impressive. Terry is at the forefront of the food justice movement, focusing on plant-based food that is not only good for you, but deliciously different than other vegan fare. Stories of building community accompany each recipe, so the book makes for good reading. There are also suggested songs to listen to for each recipe. How cool is that?! Recipes include traditional ingredients of African food prepared in a wholly different way. Afro-Vegan is a must for the cookbook collector and even better if you actually make the food. –Amanda Rock

Deathmatch Vol. 3
Paul Jenkins, Carlos Magno
BOOM! Studios
Street: 07.10
The third and final volume of writer Paul Jenkins and artist Carlos Magno’s series wastes no time getting right to the heart of things. Both super-powered heroes and villains have been locked up together in a prison-like compound and forced into one-on-one combat, fighting to the death. The narrator of the story, Sable, says that of the 32 original inhabitants, only six—including herself—remain, and no one is quite sure who’s pulling the strings. Jenkins is a veteran of mainstream superhero comics and relishes the opportunity to play with some old tropes and has a little more fun with character archetypes than he was able to working under the corporate supervision of the Big Two. That’s also the book’s biggest problem. Jenkins writes these characters like we’ve been reading their stories for years, when we’re just meeting most of them for the first time. He wants us to be invested, but the emotional connection between reader and character is lacking. It’s paced well with more than a few exciting moments, but it never feels like the stakes are all that high. –Trevor Hale

My Prison Walls
GG Allin
Aggronautix
Street: 08.18
Fuck Merle Allin.  I know that everyone’s a hypocrite and we all need to make a living and blah blah blah.  But seriously, fuck him.  He continues to get paid off of exploiting GG’s legacy by making documentaries and bobble-head dolls in exactly the same capitalistic and systematic manner that GG was against—and now, his prison diary.  The book is really good though.  GG’s correspondence with John Wayne Gacy is grossly fascinating.  His art is better than what I expected it to be and the portraits of GG done by other inmates were pretty cool too.  As far as the diary part goes, its mostly GG Documenting how many times a day he would jack off while inside.  I don’t want to ruin the book for you, but it turns out to be a lot. Just like John Stockton’s recent autobiography, if you don’t like John Stockton or basketball you won’t like his book because although John is like the awesomest dude alive, he’s a really fucking boring guy. So if you don’t like GG Allin, just go ahead and jack off on this book, then poop in it and smear the poop on you and throw it on your friends, then beat yourself in the head with it before you burn it completely.  –Mike Brown