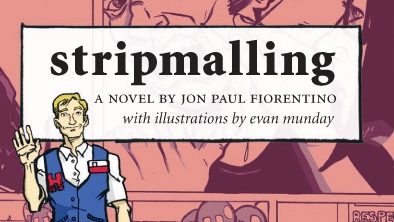 Black Tooth Grin: The High Life, Good Times, and Tragic End of “Dimebag” Darrell Abbott
Zac Crain
Da Capo Press
Street: 06.01
Gunned down during a performance with his band, Damageplan, “Dimebag” Darrell Abbott became an even bigger celebrity in death than in life—a difficult feat for the guitarist of million-plus-selling band Pantera. Former music editor for The Dallas Observer Zac Crain wrote this biography of the man who changed so many people’s lives through his guitar and endearing personality. Black Tooth Grin describes Dime from his early youth and family life to his headlining festival days to his post-Pantera career rebuilding. The book starts with the moments preceding Damageplan’s final performance from the perspectives of security guards and audience members. It may be a cliché, but the introduction alone will leave any reader, regardless of musical orientation, breathless. The rest of the biography only improves from there with vignettes from metal giants such as Rob Halford, Sebastian Bach and brother Vincent “Vinnie Paul” Abbott. This book is required reading for metal heads and highly recommended for anybody interested in music. –Nick Parker

Gun, With Occasional Music
Jonathan Lethem
Harcourt Books
Street: 01.01.94
There are probably more books about private investigators than there are real-life private investigators, but books like Gun, With Occasional Music make one want to trade in that worthless degree for a loaded gun and a full flask. Jonathan Lethem’s book, a Sam-Spade-by-way-of-Aldous-Huxley story, is set in Oakland in the “not-too-distant-future” and, like many tales of hardboiled private dicks, centers around a murder. The similarities pretty much end there, as Lethem’s razor-sharp first-person prose strong-arms us through a dream-like world full of anthropomorphic, trigger happy kangaroos, government provided designer drugs with names like Forgettol, and a quixotic protagonist with a gumshoe parlance who marries terms like “sleazy” and “noble” as easily as Mother Teresa during her years on the crack rock. Lethem masterfully speaks in this protagonist’s voice, unraveling a whodunit full of quirky twists and turns, and refreshingly bereft of anything resembling redemption. Come discuss Gun, With Occasional Music at the Hardboiled Book Club’s next meeting. 6:30 PM, August 25, at Sam Weller’s. –J.R. Boyce

Heavy Metal Fun Time Activity Book
Aye Jay Morano
ECW Press
Street: 9.01.07
You can judge just by the title that this, uh, activity book is purely meant as gag-gift material filled with a little under 50 pages of heavy metal inspired coloring pages, mazes, word searches, crosswords and trivia. While some may get a kick out of connecting the dots to make Dimebag Darrell’s goatee, and yeah, the first flip-through will garner some chuckles, the only portions of the book that may actually entertain are the trivia-based puzzles. The artwork actually leaves much to be desired–the black and white nature is a given because it’s an activity book but your favorite metal icons could have been drawn better in every instance. The biggest humor and irony that lies in this book is the fact that the foreword is written by Andrew W.K., whose musical career has fallen off the map, so he now hosts a kids reality T.V. game show on the Cartoon Network.  But don’t sweat the details–it’s simply silly gag fun, because metal isn’t all about the darkness and evil. –Bryer Wharton 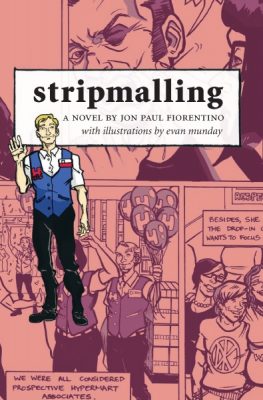 Stripmalling
Jon Paul Fiorentino
Illustrated by Evan Munday
ECW Press
Street: 03.09
This is the story of Jonny.  Jonny works belittling positions at his favorite strip mall.  Much like yours truly, Jonny would like to call himself a writer, but fears the “tumbleweed moment” that would surely take place were he ever asked to prove it.  Consequently, Jonny sells a variety of narcotics to the kids at the strip mall’s drop-in centre.  But he’s using the money to go to college, so it’s ok.  Hold on–this novel is less straight-forward than I’m making it sound.  It’s also about Jonny the writer of Jonny the character.  It’s about writing a novel called Stripmalling, and it’s about quarter-life crises, suburban homogenization, and did I mention some of it’s a comic book?  Picture that P.S. Hoffman movie Synecdoche, New York, except easier to swallow and way funnier.  In a way, the book itself is a mid-life crisis, more than being about one.  Stripmalling is undeniably original, brave, and a very fun thing to read. –Jesse Hawlish