Julian Mihdi, the author of the debut fiction work Chimera, has a fun vocabulary. He allows this vocabulary to carry his stories from one to the next and does so successfully. In fact, I feel like anyone who gets a kick out of reading for the sake of the trills and buttresses, arpeggios, daring colonnades and, hell, even arboretums, would enjoy Chimera.

It’s, as the title page suggests, “four stories and a novelette.” The four stories leading up to the novelette, which resides at the back in what I assume is meant to be a bravura for the whole book, vary dramatically in length. The longest of them is “A Search in Siam,” which clocks in at 22 pages. This story is the closest one I got the sense of a Bildungsroman taking place (common for debut works). It follows the character Louie, who does not show up (not that he needs to) in any of the other pages, as he goes about his day in Thailand when he is confronted by a Blue-skinned, alicorned Buddhist angel who seeks to rid the world of those statues owned by those who wear Buddhism like the latest Supreme sweater. Or Birkenstocks, take your pick. Anyway, the reason why I think this one is most Bildungsroman-y of them all is that Mihdi’s short biography at the back of the book reveals that he served a stint in Southeast Asia teaching English. What “A Search in Siam” wants to be about is a young man finding Nirvana, or the revealed meaning of it. Put the equations together and you get an idea. This is the story I recommend one read first. It’s the one Mihdi cared most about when writing Chimera, no doubt. It captures the joviality of Mihdi’s spirited writing. 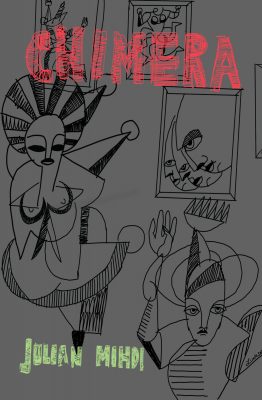 But it’s not all perfect. Nothing ever is. While I appreciate the musicality of Mihdi’s stories, I often found myself lost in them, and not in a Faulknerian way (though, I am aware, it is not fair to draw comparisons to Faulkner on a debut work). What I mean is, I think sometimes Mihdi was lost in his own stories. Many sections left me wondering who was narrating, if there was an overarching chimeric narrator who liked to dip in now and again and, most of all, what some of these stories were trying to say to me. What does not happen in Chimera often for me is the moment in which the internal framework of the story forces all the meaning to coalesce in a climax or anti-climax. And maybe that’s the point. Maybe his stories were meant to “stop” and not “end.” Tom Stoppard did it with Rosencrantz and Guildenstern are Dead. Why can’t Mihdi? He certainly can.

The other thing I’ll say on this side of the fence is that, as a lover of grammar, the book could have used a few more passovers before going to print. It’s not unreadable—it can even be endearing—but when “German Shepherd” is spelled “Shepard” in “Siam,” I can’t help but eye the pages crossly. Then again, given the surrealistic nature of the subject material, it’s possible that, once again, the misspelling was intended. I can’t be sure.

It sounds harsh, but it’s not meant to be. Buy the book. As a local writer myself, I love that Mihdi puts such a daring first book out. Most people wouldn’t even try to touch some of the landscapes that Mihdi describes. And sports fans, listen to the way he describes a foul on a layup. “And one!’ a blue-booted, airborne blur screams. The orange sphere hangs in the air, a grapefruit at the tip of an invisible branch, then kisses the rickety ring twice before falling through a gray net.” This is the type of description I recommend this book for. He could have said something simple—something drab that gets the point across, but what fun would that have been for him? It’s in these stretches of story where you can see just how much fun Mihdi has when he writes. That description comes at the beginning of the novelette, called “The Scorekeeper.” And there’s a lot more of those not only in the big one but throughout the rest of the work.

Keep an eye out for Mihdi in the future. He’s already cranking away on other writing, as is evidenced by his Onion-esque satire and Trump Politik think pieces on his website julianmihdi.com. Chimera is available locally at Golden Braid Books and Sam Wellers, and can also be ordered online via Amazon or downloaded for Kindle, Nook and Kobo. –Dylan Davis