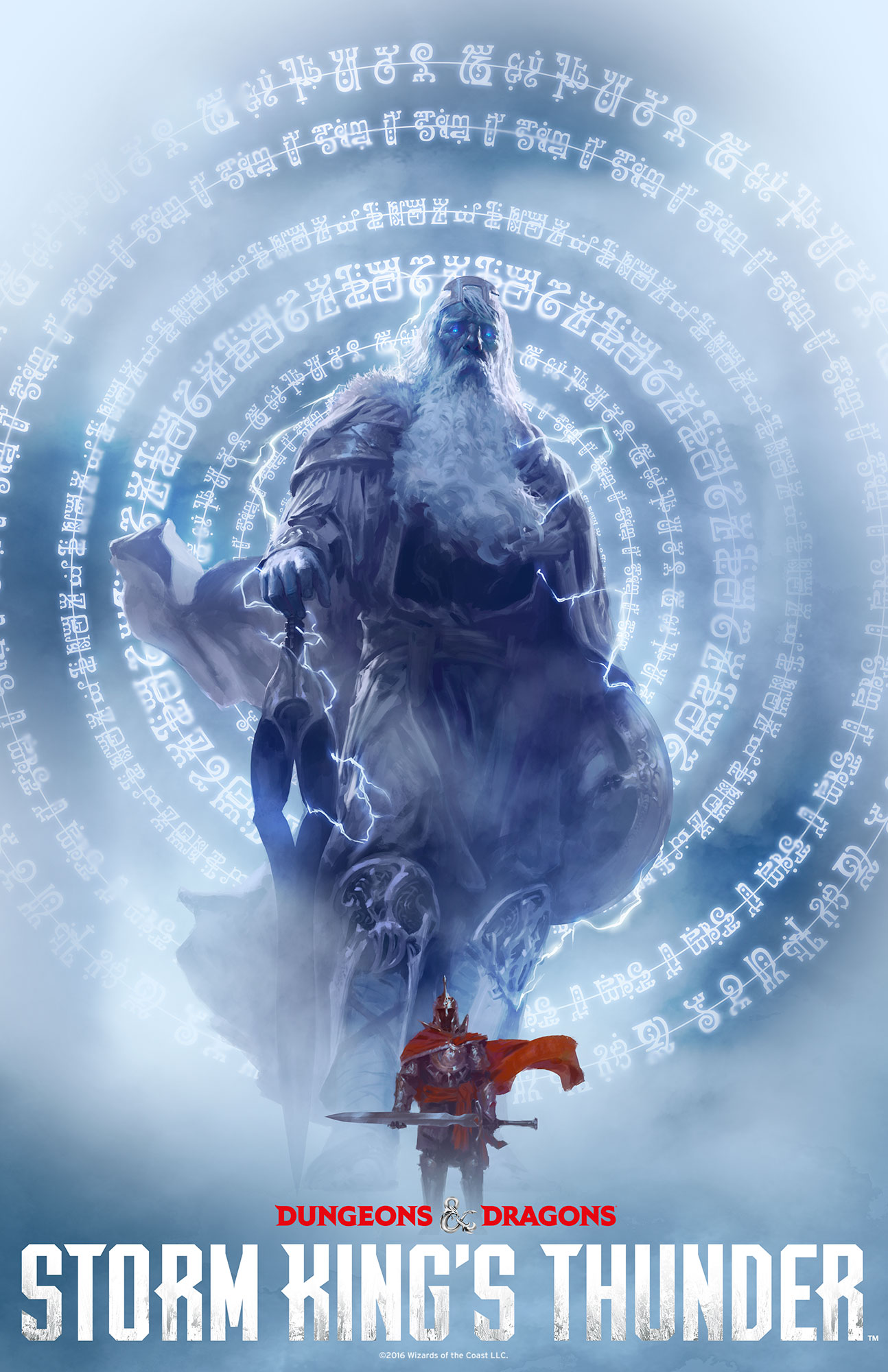 In my many years of using a d20 to carve my way through whatever the high fantasy world of Dungeons & Dragons has to throw at me, I had yet to crack a Dungeon Master’s Guide and delve into the experience of running a campaign. Admittedly, I always took the role of DM for granted—I had always been too focused on choosing the right build for whatever paladin or bard that I was currently controlling.

When I got a review copy of Storm King’s Thunder, the latest in Wizards of the Coast’s pre-constructed Dungeons & Dragons, I found myself in the unfamiliar territory of running a campaign. Initially, I was intimidated by this prospect. The DM is in charge of setting the tone for the whole adventure, and I wondered if I had the chops to make an evening of sword-swinging and loot grabbing entertaining. Luckily, Lead Designer Christopher Perkins and his team succeeded in crafting a nuanced adventure that even a first-time DM like me could pick up and have fun with.

The campaign’s preparatory section immerses the DM in the surprisingly complex political hierarchy of giants. Most of the action found in Storm King’s Thunder plays out in the fallout of a major shakeup in the giant’s social structure. Annam the All-Father, chief among the giant pantheon of gods, has become displeased with the complacency that centuries of power have given to his progeny. To light the proverbial flaming sphere underneath the asses of his children, Annam shattered the ordning, which is (was) a type of cosmic pecking order among the six giant races. With this upheaval in full swing, civil war has broken out among the giants, leaving the world of humans, elves and dwarves caught in the crossfire. It’s the adventurers’ job to navigate through this dangerous conflict and help restore some kind of order to the people of the world who don’t love having their families crushed by giants.

Where most campaigns tend to begin in some kind of neutral, relatively safe location, Storm King’s Thunder thrusts our intrepid adventurers into a recently sieged village that is being picked apart by goblins. It’s a fantastic way to open a story about feuding giants—from the get-go, nobody knows why exactly a village that should have been bustling with wealthy hunters was now empty and pockmarked with boulders. As a first-time DM, this was the most challenging part of the campaign—I knew what was going on, but letting the team put the pieces together while beheading rabid goblins was an important part of telling the story. Luckily, the book is organized in such a way that each small encounter helped build the bigger picture of the campaign’s prologue.

One aspect of Storm King’s Thunder that added an unexpected level of depth was the mechanic that gave players control of a random NPC that they had to guide to safety in the midst of a giant siege. Allowing the players to shift gears and take the role of a relatively normal person in the middle of a city-wide attack lets players experience the fantastic world of Dungeons & Dragons from the eyes of a civilian. In a game that expects its players to become superheroes, it was a nice dose of reality to see what it’s like to face a supernatural being without the benefit of supernatural powers.

As we continued through the campaign, I was impressed at how well Storm King’s Thunder balanced structure with improvisational freedom. During chapter three, for example, the entire Savage Frontier sprawls open for exploration, giving the DM the ability to guide the adventurers through an impressively cultivated array of side quests and mini-encounters. We’re not talking about generic “go fetch” missions or cleansing ruin after ruin of its monstrous occupants, either—one chance encounter finds the players manipulating a lovesick hill giant into betraying her husband-stealing queen.

Based on my experience running Storm King’s Thunder as a novice DM, I continue to be impressed with the quality of work that Wizards of the Coast puts into their roleplaying game peripherals. The art is fantastic, the maps are meticulous and all of it is set against a Shakespearean story of corruption, betrayal and power.