Book reviews for A Book About The Film Monty Python And The Holy Grail, Dogshit Park & Other Atrocities, The First Collection of Criticism by a Living Female Rock Critic and more! 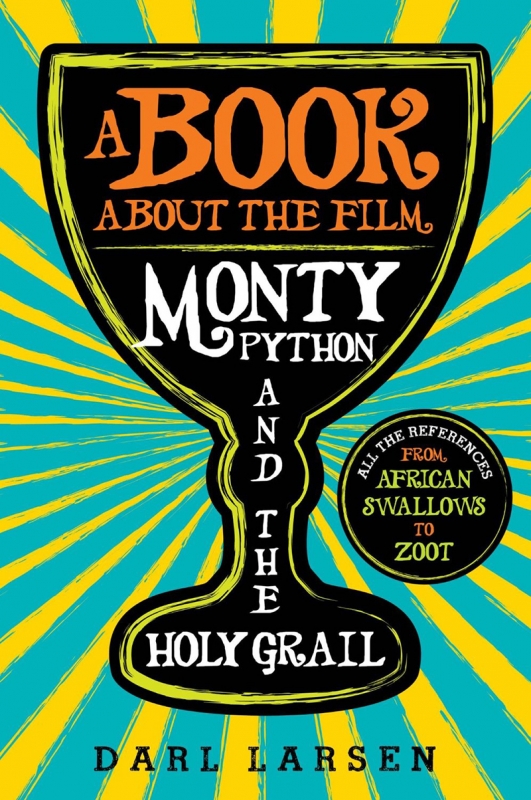 A Book About The Film Monty Python And The Holy Grail: All the References from African Swallows to Zoot
Darl Larsen
Rowman & Littlefield Publishers, Inc.
Street: 03.06

If you’re a Monty Python fan of any generation, you’ve most likely watched Monty Python and the Holy Grail about a dozen times or so. But as anyone obsessed with the film will tell you, you just can’t always catch all the jokes. It has nothing to do with intelligence or history or even that it’s British—the film simply has too much material in it for everyone to get each reference. Well, now you can! This book has everything, all the way down to the most meaningless phrases, explained in detail as to why they’re there in the first place and why you should find it funny. Examples would be: why King Arthur and his knights avert their eyes from “The Lord,” why the monks bash their heads with wooden slabs, why it is called Castle Anthrax, why Lancelot hacks and slashes his way through the wedding, and all that useless information about swallows. Plus, the book goes scene by scene, in order, so you can follow along for however many hours it takes you to read and watch it. This book is thicker than many dictionaries and is not for the timid fan. Tread wisely, Dennis. –Gavin Sheehan

Drummers have a reputation of being the craziest, funniest and most tattooed members of a band. They are seen as men who come from working class families, all with the insatiable need to hit something. Tony Barrell explores these various stereotypes through the lives of many drummers in Born To Drum. The book is well-written, and the setup of retelling stories, along with the wide variety of information, never becomes congested. This book is a must for anyone wanting to understand the dynamics of famous contemporary bands and the lives of their drummers. Its easy language and simple-yet-complex deconstruction of “what it means to be a drummer” allow this book to be relevant to veteran drummers as well as to those who have never put wood to canvas. –Barnabas

Todd Brendan Fahey’s book Dogshit Park & other atrocities was one of the most fun and quotable books I’ve read in some time. Fahey has created a series of laughable shenanigans and presented them with a strong authorial finesse— leaving nothing for the reader’s mind but to wander. It drips and haunts, with drug nuance a-plenty, and, depending on your side of the fence, it could be equal halves hilarious and terribly, terribly frightening. The story moves you forward, but Fahey’s way with words is clearly the star of this production. It’s descriptive and verbally illustrative in a way that we are drawn into this world to the point that our heels seem to leave marks behind us. Fahey will have you, despite the nuisance of your better judgment. This second book in the Fahey catalogue will only drive other engaged readers to ask about a third. It hints at wordplay and intellect in the way many writers in the ’70s wrote, which, in turn, lined the walls of college dorms and sent many a young spirit out to explore the in- credible world right out their back door. Bravo, Fahey—I hope to hear from you again soon. –Benjamin Tilton

If you appreciate women and have even the slightest interest in music, this is the most relevant piece of literature you could pick up. Hopper has created a book that reads like a memoir, though it is a collection of critical, stimulating essays on music and pop culture, ranging from R. Kelly’s rape allegations and acquittal to M.I.A.’s views on middle-class America. Working for two decades as a music critic for several publications, including Pitchfork, Hopper has acquired an apt perception of what it means to be female in the music industry—whether it’s as an artist, writer or 15-year-old fan in the crowd at Warped Tour. “Us girls deserve more than one song,” she writes. “We deserve better songs than any boy will ever write for us.” As it is portrayed through her approachable, fierce pieces, ladies and gentlemen alike must decide whether or not to put up with this underrepresentation. –Kia McGinnis

Going into the City: Portrait of a Critic as a Young Man
Robert Christgau
Dey Street Books
Street: 02.24

Robert Christgau, aka the “Dean of American Rock Critics,” has been commenting on pop culture for decades through published work in magazines like Esquire, Creem and The Village Voice. So, it is not surprising that his memoir would yield impressive stories about the golden eras of rock n’ roll that saw the rise of The Beatles, a fresh wave of bohemianism and even the birth of punk at CBGB’s. Christgau’s memoir is intellectual, remarkably sharp and honest. It is a must-read about a life that has navigated through the complexities and insecurities of sex, love and rock n’ roll. His narrative is unique, as it is told from the keen perspective of a journalist who has been providing commentary on decades of transformative pop culture. The knowledge to be gained from this book is essential for a well-rounded understanding of pop star history. While Going Into The City takes nothing away from that particular narrative, I just find Christgau’s worldview to be refreshingly human and relatable. Admittedly, this is not a book that one gets through in one sitting, but one that requires time to fully digest, as it is quite the cultural journey. –Nick Kuzmack