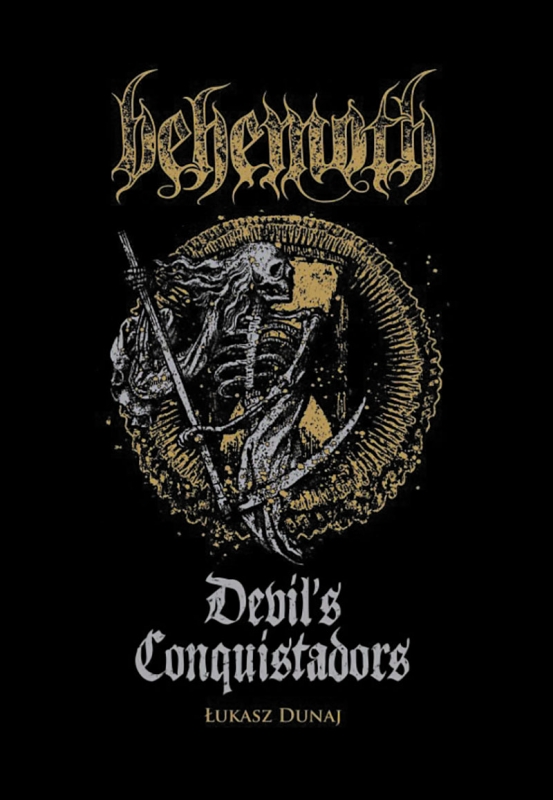 Behemoth: Devil’s Conquistadors
Lukasz Dunaj
Metal Blade
Street: 02.24
I love zines, and I love books: Behemoth: Devil’s Conquistadors successfully fuses these two print mediums—almost like Lords of Chaos, only with less churchburning and more focus on one band’s history (Behemoth, if you hadn’t guessed from the title). Told through a thoughtful and well-researched lens, the author takes an almost backseat approach and lets the story of Behemoth unravel itself with plenty of quotes and interviews with frontman Nergal, past and present members of the band and other pertinent individuals. The book is packed with drama, mystery, history and plenty of darkness. Any die-hard Behemoth listener, metal fan or even those who enjoy books with words in them (though this has plenty of pictures for all you mouth breathers out there) will find this an extremely interesting read. It isn’t just a biography—it is filled with insight into an entire subculture, beginning with the story of how a teenager growing up in communist Poland, armed with a guitar, a curious mind and sympathy for the Devil, rose with his band into not only stardom but into one of the most iconic acts in extreme music. –Alex Coulombe

Infographic Designers’ Sketchbook
Steven Heller + Rick Landers
Princeton Architectural Press
Street 10.14.14
As a graphic designer by trade for quite a few years now, I was naturally excited when the Infographic Designers’ Sketchbook found its way to my desk. Like most visually-based graphic design books, IDS has the common 20/80 split of words to pictures, seen in many other current design books. After a closer look into the content of each page, it becomes surprisingly apparent that, like all the infographics and accompanied sketches featured in this book, the book itself is one large infographic. The constant format found throughout the entire book—which consists  of jumping from one firm’s or person’s infographic idea map to another through a span of 347 pages—makes for an exhausting read. Luckily, the book’s typographical reading is drastically less in comparison to all the visuals presented. The real “reading” comes from all the infographics and how beautifully each one is executed in their own way, while visually projecting large amounts of information in a compressed representation. One major and important part of IDS involves the reader finding many inspiring representations of how information is mapped out, while swimming through each designer’s mental process from start to finish, on one of the hardest subjects of graphic communication. From a designer’s standpoint, the relationship of the content in the book matches the book as a whole, and ample credit is due to the publisher and its people who created it. Great book. – Joshua Joye

Life on the Dingleball Fringe
Jon Herbert
Strawberry Books
Street: 01.15
Jon Herbert’s first novel is a grand testament to straightforward writing. There is no flash, style or prose in this under-100-page casual wandering through Salt Lake City’s bar crowd. Some stories take you away. This series of stories is more comfortable dwelling in the things that clatter and clunk around your drink as you try to get away. The writing itself is subtle and enjoyable, but it passes the time in the same way a song you recognize would as you travel in an elevator. The characters in these stories are all people you know, and their actions and shenanigans fall flat like the continued existence of Jerry Springer reruns. The stories are structured well and flow with incredible ease, but the end comes without a climax, and you find yourself feeling like you just spent a night on Facebook with nothing to show for all the drama you just witnessed. The most upsetting thing about this project is that Herbert is an excellent writer but has no story to show it off with. You want to like him so bad the entire read, but find yourself going, “Huh … I guess this is it.” –Benjamin Tilton

Rebel Music: Race, Empire, and the New Muslim Youth Culture
Hisham Aidi
Vintage Books
Street: 12.02.14
Hisham Aidi produces what is perhaps one of—if not the—most brilliant, interesting and essential books on understanding Islam and Muslim youth movements in the 21st Century. Aidi explores the in-depth relationship that Muslims have played in the European colonization of the New World and their struggle in a post–9/11 world—he thoroughly examines everything from slavery to community building to the continued fight for civil rights. Furthermore, Aidi dissects the varying attitudes that the West has had toward Muslims that stem from medieval thought, the unique understandings of race, the rise and fall of social movements such as the Nation of Islam and the Black Panthers and the efforts surrounding decolonization. The book also offers a detailed look at the United States’ attempts at using different Islamic sects of Sufism and Salafism to pursue an agenda of de-radicalization and maintenance of U.S. hegemony. Aidi sets the tone through hip-hop, rap, punk, jazz, Gnawa reggae and Andalusian music and shows how music contributes to the understanding and questioning of the greater Muslim cultural identity on a global scale. It is not only important to understand the trends of globalization that this book dissects—it is mandatory. –Nick Kuzmack

Stolen Sharpie Revolution: A DIY resource for zines and zine culture, Fifth edition
Alex Wrekk
Lunchroom Publishing
Street: 12.01.14
Twelve years ago, The Stolen Sharpie Revolution first entered the zine-world as a comprehensive go-to guide for all zine-related questions. Now, in its fifth printing, it’s still as relevant as always. Alex Wrekk (Brainscan) reiterates a passionate plea of creativity for this field: there’s no one correct way to do a zine and there’s always a way to get one done. Reading this again after years of being out of the zine scene, I feel reinvigorated to draw or write something and it’s comforting knowing that resources are available. Complete with in-depth lists detailing everything from the initial motivation to the process of sewing binding, there’s a wealth of experience and knowledge in this little book. SSR reminds us that the Internet hasn’t killed printed work and technology has only advanced the way in which we create and distribute. This edition includes updated computer tricks, copyright information and photocopy methods. This is a resource of resources, a book of questions and a fascinating look into the underground scenes that only grow as we share. Grab your notebooks and sharpies and other artful weapons to create something, and when you’re ready, read into SSR to get it out there. –Taylor Hoffman