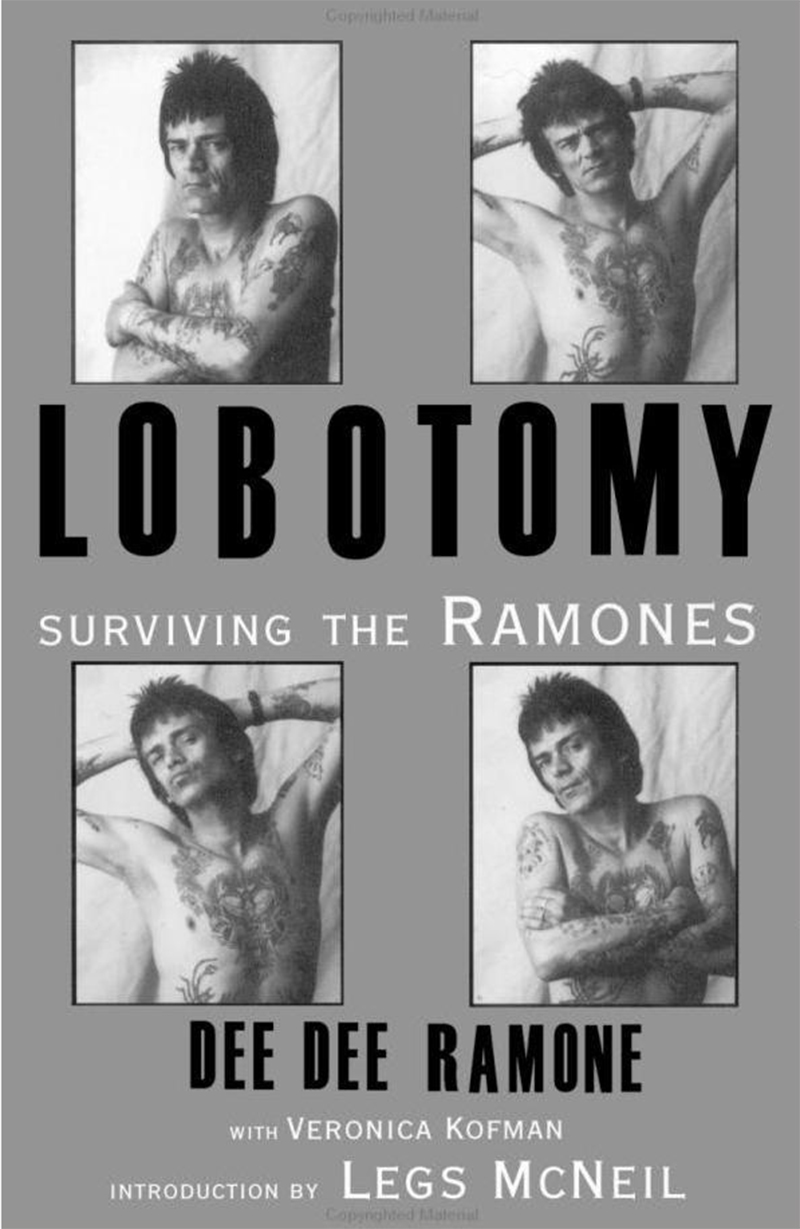 2016 marks the 40 anniversary of the release of the Ramones hugely influential self-titled debut album. In anticipation of this momentous occasion, Da Capo Press has released the autobiography of famed Ramones bassist Dee Dee Ramone (aka Douglas Glenn Colvin), Lobotomy: Surviving the Ramones and his 2001 novel, Chelsea Horror Hotel. These releases are a perfect glimpse into the life of the controversial bassist. Dee Dee was the ultimate outsider and the authentic rebel. As a part of the Ramones, he helped form a group that symbolized the originality of rebellion in all things punk rock.

While the Ramones were arguably bigger than Jesus, being in such a group took its toll on the individual members. Dee Dee was by all means a talented individual whose tenacity and creativity serve as the backbone for the Ramones’ blitzkreig rock n’ roll. As highlighted in his autobiography, Dee Dee’s life indicated his being a total misfit, something that he was unapologetic for and perhaps even fed into. His childhood was rough and filled with circumstances that would make any weak yuppie cringe. Dee Dee was a regular drug user with a longing fondness for copping dope, a habit he yearned to kick and would eventually die from in 2002.

His participation in the Ramones in many ways obscured this addiction, but was it ultimately a factor into his seemingly out-of-control downward spiral. In his rebellious nature, Dee Dee sought to overcome the Ramones’ classic leather jacket and ripped jeans uniform and even had his own but brief career as a rap artist. Eventually, Dee Dee would take his leave from the Ramones and spend valuable time finding himself. Later in life, and about a year before he died, Dee Dee wrote Chelsea Horror Hotel. Although fiction, its pages reveal the trappings of a life in an consistent environment that was subject to the dangerous intrigue that made up the confines of the infamous Chelsea Hotel. Murder, rape, hauntings and more are exposed through the workings of Dee Dee Ramone as he narrates the spooky scene that is New York’s most renowned hotel.

These books are essential in their raw view of the rock n’ roll world. It’s not a safe or comfortable place to be—rather it is world consumed by unforgiving darkness and the constant struggle for survival. These are themes that are too easily romanticized by today’s retro rockers and ill understood by the legions seeking to be hip with their Ramones “brand T-shirts.” Readers should take care to heed that what is told here is gospel for a lifestyle not meant for the faint at heart. The Ramones sparked something in the world, and Dee Dee’s part in it is incredible at best and desperate at worst. In all, one will easily find that these are stories that show the true nature of our beloved rock n’ roll icons. Specifically, it shows that in their layered humanity, these icons are more than the qualities that place them on a pedestal. They are hopelessly like us with vulnerabilities, flaws and endless determination. Lobotomy: Surviving the Ramones and Chelsea Horror Hotel are must-reads. Dee Dee is indeed a rock n’ roll legend, but he is much more than the Ramone’s bassist that shouts “1, 2, 3, 4” before launching into iconic songs like “Blitzkreig Bop.” He was part of the generation that created the roots of punk rock, for better or worse, and we will never see his like again. RIP Dee Dee. –Nick Kuzmack