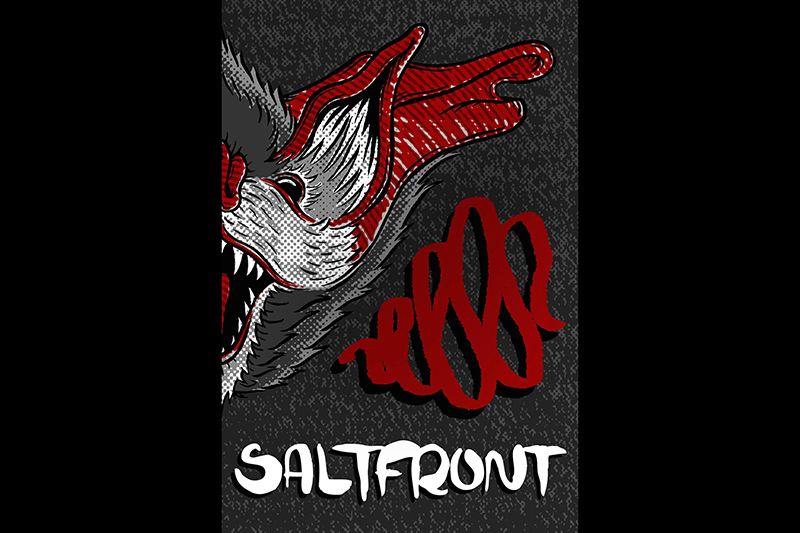 Salt Front No. 4 confronts us with the question of “Embodiment”: What does it mean to have a body (real or imaginary) existing on this weathered ball of water, grass, and rock? Local, national, and international writers of poetry and prose try their hand at answering such a question: in Andrea Lani’s “Stars Come Down,” it means traversing a dangerous ledge between reality and wonder, while raising a daughter in a dying world; in an excerpt from Alisha Anderson’s “Mountains that Never Rest…” it becomes a duty to recognize and trace the marring of nature by human means—taking those with the shovels to meet the bluebirds; in “The Chickens Vanish” by Amy Brunvand it dares us to leave the chicken coop unlocked, becoming victim and victor in the black magic night of nature; for Sarina Bosco in her piece “What Some People Call Loneliness or Autumn” it means holding a quiet vigil on the beating ground, laying our hands in the dirt, pushing our fingers—like roots—into the earth, completing the forgotten energy circle. In No. 4 the progression from piece to piece is exquisitely arranged, and—unlike similar publications—creates a whole that can be pleasingly read, front to back. The artworks of Evan Jed Memmott act as set pieces—set in black, white, and grey—by which the written words begin to evolve, solidify, and dance about the page. Whether or not some of the pieces fail to push past the binary conception of nature as the ravaged or the goddess, matters little; for No. 4 is out to create a conversation about and with Nature, through art and an intercorporeal reaching out—branch to hand, soul to soul—with much success. For $12 an issue, one could hardly find a more economic and illuminating collection. –Z. Smith