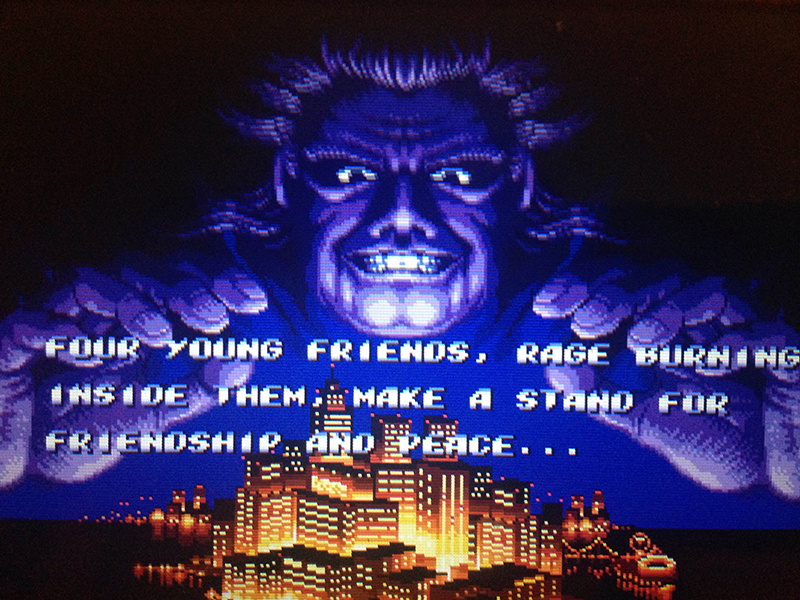 Nothing says friendship and peace like kicking a bunch of dudes in the face for a couple hours.

Side-scrolling brawlers don’t really have a home on current-gen consoles, but with the wave of retro gaming, helped in part by Nintendo’s Virtual Console, they have a place carved out for them on handhelds. Streets of Rage 2 originally launched on the SEGA Genesis in 1993, and has since received a number of ports and remakes, the most recent being a “3D Classics” edition for the Nintendo 3DS. The port is a standard affair—the only real update to the game is the integration of 3D graphical effects. These can be hit or miss—the pop-in is helpful for determining where exactly characters stand in relationship to each other on a 2D plane, but for stages with prominent smoke or rain effects, the pop-in can obscure the onscreen action to a crippling degree. I played with the 3D off for the majority of the game, since a game release playing off of nostalgia does better when experienced in its original form.

If you’ve played the original game, this port will make you feel right at home. Performance is smooth, with little to no framerate stutter and quick input response. The four player characters from the original version appeal to different playstyles, but they each shine in their own ways. The stage progression is fucking wild. The third stage has you fighting through an amusement park to beat up what seems to be some sort of Freudian Satan in the middle of a hive ripped straight out of H.R. Giger’s sketchbook, and by the seventh stage, you’re beating up robots in some sort of pseudo-tropical warzone. The game offers no explanation for these radical shifts in locale, and to be quite honest, I think that’s for the best. I don’t need to know why I’m punching and kicking my way through palette-swapped greasers and Street Fighter clones in a corporate office building or a dive bar. I just want to have a blast doing it, and the game delivers in spades on that front.

Combat is tough, even at the default difficulty level, and carelessness and button mashing will result in your death at the hands of some of the game’s boss characters. Enemy design is average, with lots of sprite recycling and recolors to give the illusion that you’re fighting different enemies. Even the boss fights, with a few exceptions, get recolors in later stages, with no updates to their movesets, and the elevator ride up to the final boss is just wave after wave of recolored bosses. The fighter relay mode offers a nice switch to general strategy, cycling you through the four player characters as you complete stages or lose lives. The game also includes a local multiplayer mode if you have friends who also have a 3DS and a copy of the game. Half the fun of arcade brawlers is working your way through it with a friend or two, so I’m glad SEGA had the foresight to keep this feature for the handheld release.

Streets of Rage 2 appeals to a niche audience. If you look back on arcade cabinets and piles of quarters fondly, then this title is perfect for you, with the added bonus of only having to pay once to play it instead of funneling coins into its maw for an afternoon. If you’re looking for modern titles with flashy graphics and genre innovation, this might not be for you. Keep in mind, however, that a lot of modern titles owe their existence to franchises like Final Fight and Streets of Rage. It’s an important piece of gaming history; one that I’m glad has found a revival.