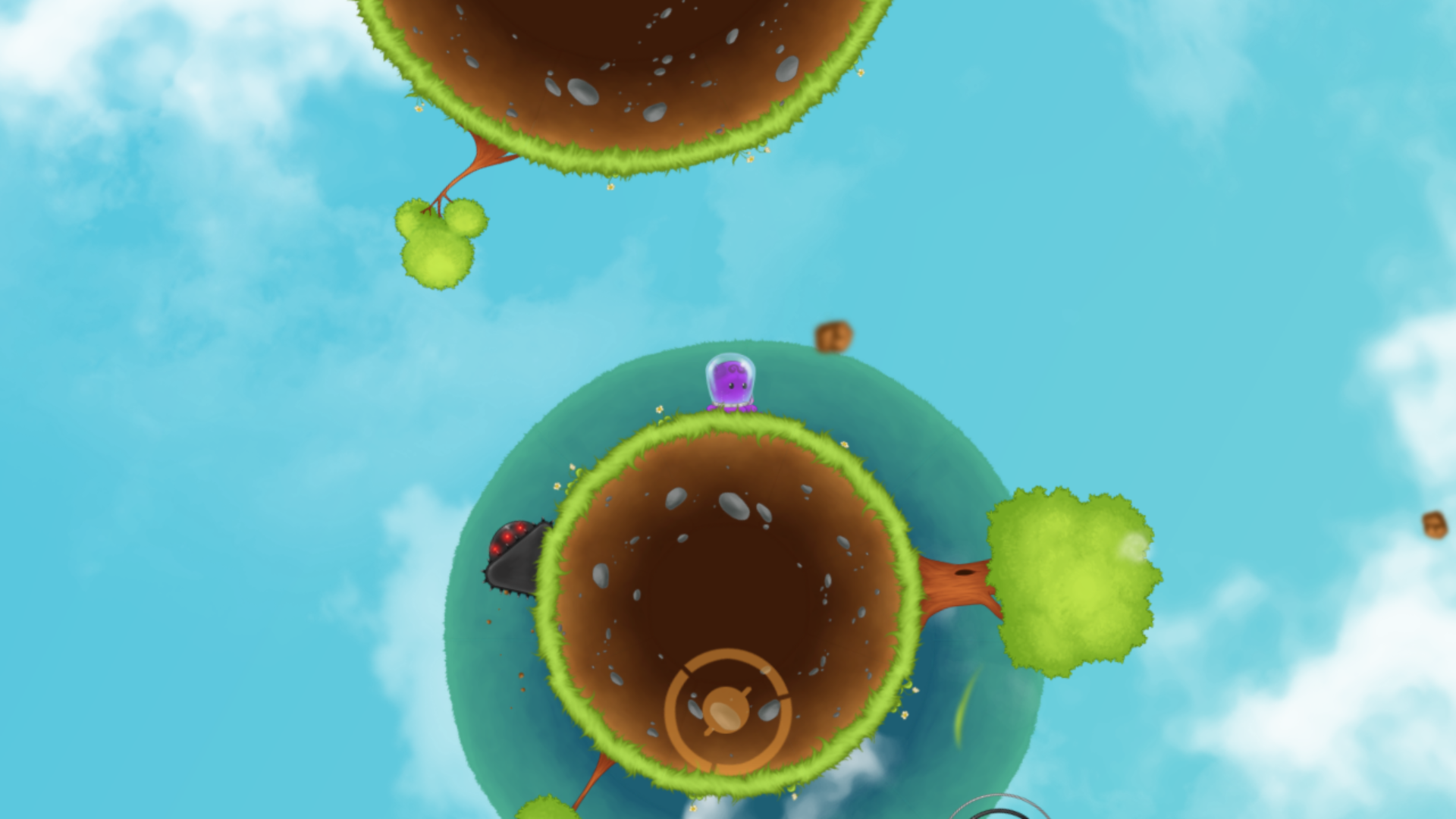 Review: Airscape: The Fall of Gravity

Airscape: The Fall of Gravity
Cross-Product

Airscape: The Fall of Gravity is one of my new favorite platform/indie games. Every aspect of this game is so beautiful and well done that it’s impossible not to appreciate. In Airscape: The Fall of Gravity, you start out in the ocean as an adorable octopus swimming around with your other aquatic friends when, suddenly, a beam of light abducts all of you. Then, just as suddenly as you were abducted from your undersea home, you appear alone in an aboveground landscape that seems like a normal beach at first, but as you move through the level, you begin to notice that the seemingly normal landscape is quite bizarre, as there is no real sense of gravity. The lack of gravity is what really makes this game unique. You are never grounded to the bottom of the screen like in traditional platformers—as you move through the levels and avoid certain death from odd mechanical objects, the screen rotates around. While I must admit that this is a bit jarring at first, you do get used to it after a few levels, and once you do, you can really use it to your advantage. If the screen rotation really does bother you, you can actually adjust it so that it’s a bit less harsh on your eyes. The object of the game is to rescue all of the undersea critters and your other octopus friends. Once you rescue the other octopi you can play as them, and they each have their own special abilities that can help you get through levels easier. It’s not difficult to tell what octopus you need for which level, either. You’ll get a new octopus for every zone that will help you conquer that zone, but you can choose to play whichever octopus you are most fond of. You can also use the new octopi and their abilities to go back to levels that you had a hard time with or missed a few critters in.

This artwork is this game is clean and the contrast between the octopi and the evil robots and mechanical objects you’re trying to avoid really just make the octopi even more adorable. Even though there are a lot of mechanical/metal objects in Airscape: The Fall of Gravity, the artwork is still very colorful. The landscapes change from zone to zone so you never get bored with it, which is something that I personally appreciate. You go anywhere from beaches to full metal/robotic landscapes with laser beams that disintegrate you and seemingly harmless robots that turn you into calamari. Even the map for navigating the zones is beautiful—I really can’t complain about the animation in this game one bit.

Airscape: The Fall of Gravity also boasts its own fully orchestral soundtrack that I hope they make available for download. The soundtrack for this game is just as stunning as the animation. It will soothe your ears while you potentially rage-quit from getting your ass kicked by robots and explodey things. The music will also change based on what you are doing in the level—if you’re underwater, it will be muffled as if you are actually underwater. Also, the sound effects are pretty epic but not overdone. I dislike when games have a sound effect for absolutely everything, like jumps and bumping into things. I feel like this game has the appropriate amount of sound effects for every significant action. Maybe I’m over-analyzing this a bit, but I really find this detail to be important, since you are doing a lot of jumping and running about in platformers. I usually mute all of the music and soundtracks in games and listen to my “epic mix” on iTunes, but I actually loved listening to all of the music and sound effects in Airscape: The Fall of Gravity.

There are 18 zones and over 60 levels in Airscape: The Fall of Gravity that get increasingly more difficult to beat. Don’t fret, though—there are checkpoints throughout all the levels, which is probably my only gripe with this game. The checkpoints are few and far between, so if you make it through a long and difficult area but then accidentally touch a laser after celebrating your victory, you have to start all over again from the last inconveniently placed checkpoint. This is a small complaint, though, since you have no life count, so you can die as many times as you’d like without any consequence, which might be a turn-off to some people, but I personally like it. I feel like since I have no penalty from dying I can focus on perfecting my timing throughout the levels. In some of the levels, you have to rescue critters in a set amount of time before a strange mechanical arm reaches down and grabs them, so having no-penalty deaths is very helpful. This is also nice if you’re just an OK gamer like myself.

I don’t have anything really negative to say about this game other than the checkpoints being inconveniently placed, which I feel is negated by the no-penalty deaths and infinite lives. Overall, this game is both visually and audibly pleasing and the difficulty of the game progresses at a steady rate so that you never feel like you are unprepared for a challenge. I highly recommend Airscape: The Fall of Gravity to anyone who loves traditional platformers like the Super Mario series or anyone who loves a unique game.