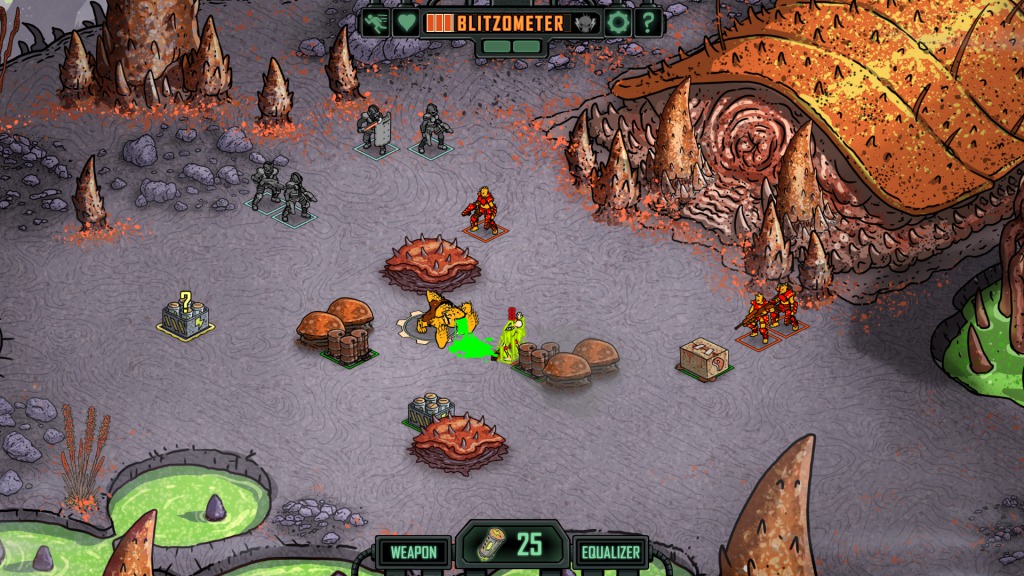 Tired of life in the overpopulated dystopia of Byzantine, a charismatic leader known only as the Mechanic jumpstarts an ancient, mobile fortress known as the Dozer. Gathering a crew of passengers and mercenaries, the Mechanic seeks to lead a new pilgrimage to the mythic paradise of Aztec City. Standing between these post-apocalyptic pioneers and their new life is Bedlam, a cursed stretch of wasteland populated by mutants, cyborgs and other malevolent forces. It’s an uncertain and unforgiving world, but with a little luck, some tactical nukes and a whole lot of moonshine, maybe the Dozer can make it through.

Playing trek after trek into the harsh wastes of Bedlam, it’s easy to draw the comparison to the classic DOS game Oregon Trail—BEDLAM just happens to add acid-vomiting mutants and polytheistic cyborgs to the mix. It’s the Mechanic’s job to monitor resources like crude, meat and power cells as well as to make sure the passengers are well taken-care of (although, there is a merchant who offers to turn members of your crew into crude oil should the need arise). Instead of going hunting for bison, however, players are often thrust into combat scenarios that operate on turn-based tactical rules. The Dozer comes equipped with troops that fit into four different categories. The Frontliners are close-range experts and can take lots of punishment, the Gunslingers have limited range and retaliate when damaged, the Trenchers have close-range shotguns that inflict high amounts of damage and the Deadeyes are weak snipers who are powerful from far away. Players can send up to six soldiers into battle, but they get resource bonuses if they can achieve victory with a smaller team.

Combat is simultaneously awesome and frustrating in Bedlam. The character animations are brilliant—each soldier has a specific finishing move, which comes complete with gasps from an imaginary audience. The battlefield offers areas where units can take cover, reducing the chance that an enemy will be able to hit them, and there are random resource packs scattered around which are totally worth working into your overall battle strategy. Achieving victory in some scenarios will actually add more powerful units to your ranks—thus far, my favorite is Chunderok, a mutant that insta-kills enemies with his caustic puke. The main problem with combat is that no matter how many fighters you bring to the party, your whole team gets a total of two actions. Despite the fact that Dozer weapons and equalizers can be activated without spending an action, this makes it pretty hard to come away from each combat scenario with a full team intact. Again, this speaks to the atmosphere of dread and hopelessness that is Bedlam, but it would be nice if the game was a bit more versatile in these combat situations.

Venturing into Bedlam, it’s soon easy to see that the deck is stacked against you. Combat scenarios often find your team outnumbered, points of interest often cost resources without any return and your passengers are always on the brink of leaving you behind, preferring to take their chances in the desert. While this can be aggravating for the first few runs, it actually speaks highly of the world that Skyshine has created. Permadeath is an omnipresent force—unsuccessful runs reset the game, and when troops get killed on the battlefield, they’re gone for good. This makes each successful step closer to Aztec City feel like a major victory against fate itself. Even though this difficulty level can be a bit discouraging, it’s also strangely liberating. I found that adopting a more reckless game plan often had positive results, and the negative results were entertaining at the very least. All in all, Skyshine’s BEDLAM is a nice mix of gaming elements. It might not hit all of the targets that it shoots for, but the game feels balanced in its execution and mechanics and I still find myself itching to take one more shot at the game’s desolate nuclear wasteland.