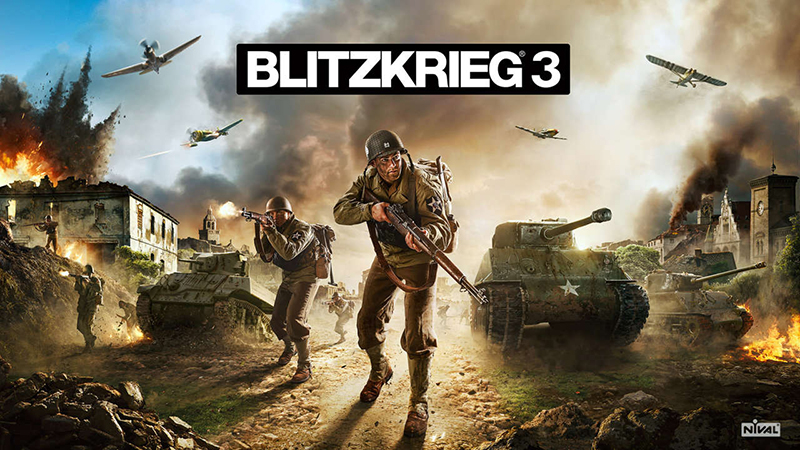 The heart-pounding, palm-sweating classic that was the first Blitzkrieg comes back to life in Blitzkrieg 3. Blitzkrieg 3 is a real-time strategy game consisting of a single-player campaign and a live-action attack and defend multiplayer option—with a turn-based camp building mode. A player can chose from the Soviet Union, Germany or the United States as they play the campaign, which spans from the invasion of Poland in 1939 to the fall of Germany in 1945. Each campaign has major battles, which the player has to navigate and win—some with overwhelming numbers and others flanked and outnumbered. Blitzkrieg 3 also offers the player control over famous generals from Erwin Rommel to Eisenhower. However, watching B-52s slowly glide across the screen while trying to maneuver troops into the nearest trenches is no longer an option. Troops move more swiftly, while the controls and logistics have been fleshed out and simplified—much like Wargame: European Escalation.

Blitzkrieg 3 still adheres to the most pivotal aspect of its critically acclaimed predecessor—every move counts. A battle can be won or excruciatingly lost by a single miscalculation. Units that had previously been deemed expendable (infantry) prove their worth time and again. For the multiplayer option, how well one does during each mission allots the player oil and goods which can be used during the camp-building mode to upgrade facilities, create defences and train troops. A person can play for a bit to build up their forces before going into a true multiplayer battle, but the AI enemy gets increasingly harder—much like the FUT (Fifa Ultimate Team) in Fifa 15. All of these improvements and troop purchases come into play during the live multiplayer battles as well as battles against the AI—where one attacks and defends bases. This multiplayer scenario will definitely be familiar to any who plays Clash of Clans, but instead of waiting hours for an upgrade or spending numerous gems, one can just go into a random battle to acquire more material.

The online portion is based on a PVP strategy of attack and defend. This new strategy allows for completely different gameplay with each multiplayer session. The multiplayer aspect can be somewhat tiresome due to the overwhelming amount of people who prefer defensive strategies rather than taking the offensive. This creates a cat-and-mouse game, which involves flushing out buildings full of soldiers with artillery and tanks—a lot like fortress assaults in Empire Total War. The connection for online was fast and strong, a point of pride for Nival, who claim that all multiplayer battles are hosted on a single server—so, no matter where you are, the connection is always the best it can be—unlike an online Call Of Duty game, where laggy connections have caused numerous people to destroy their TV, controller and, subsequently, their dignity.

Yes, this game is somewhat different from the original and no, it will not fully bring back all the warm nostalgic childhood feelings of single-handedly repelling the Americans on the Rhine, but its multiplayer options and creative gameplay deserve the attentions of any avid strategy gamer. The swift movements of troops and cataclysmic results of poor decisions makes this game harder than most Total War games, but it’s still easier than the original Stronghold. The ability to upgrade units, watch Rommel charge into the heat of battle and seamlessly link artillery with tanks so your infantry can rout the enemy offers great multi-level strategy which is not present in many real-time or even turn-based strategy games.

[Editor’s Note: Bliktzkrieg 3 is still in development, and features covered in this review are subject to change accordingly. The expected release date is still unknown.]