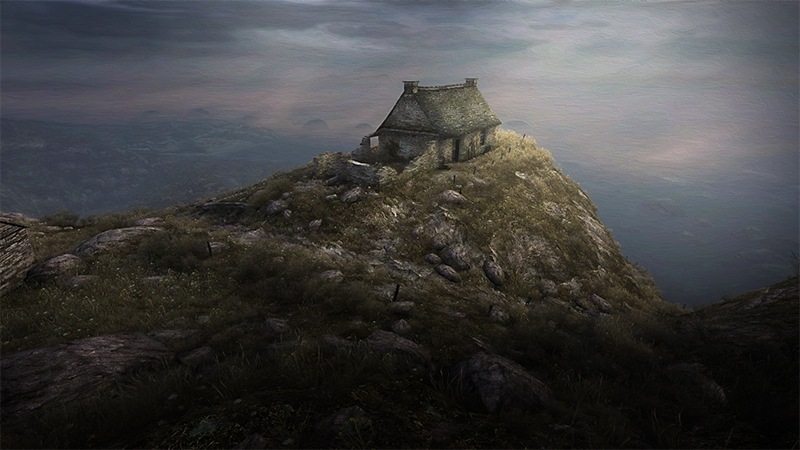 The Chinese Room is a small indie studio that began their foray into game development by creating mods for Half Life. Their most notable mods include Dear Esther (2008) and Korsakovia (2009). Shortly after Korsakovia was released and they had a greater understanding of the Source engine, they moved on to develop a full-fledged, stand-alone remake of Dear Esther for Valve’s distribution service Steam, in 2012. Since the release of both Amnesia: A Machine for Pigs and Everyone’s Gone to the Rapture, Curve Digital stepped in as publisher to release Dear Esther: Landmark Edition for consoles.

Dear Esther is a non-traditional video game that doesn’t demand various button presses or trigger pulls to perform pre-determined actions. In fact, every button available zooms in on objects exclusive and the bulk of the experience is spent walking at a snail’s pace along the various walkways of an island inhabited by shipwrecks and abandoned buildings. As you meander around the island, an omniscient British man reads letters to his wife (Esther), sharing his experiences at home after her death, his revelations about the person responsible for the car accident that killed her, as well as his experiences and interpretations of the island he has found himself on. Throughout the island, pictographs, molecular structures, words of wisdom and warnings are painted all over the walls of abandoned buildings, cliff faces and the large inner chambers of caves. In later chapters, they become more prevalent the closer you get to completing this beautiful and depressing story. It can’t go without mentioning how beautiful, stunning and captivating the environments are,  especially in the latter half of this short (roughly two-hour) storyline. There were so many instances where I was admiring the artistic beauty of the island, the waves crashing onto the shoreline and the dark sky above me. Furthermore, the sound design is impeccable and it’s incredibly engrossing soundtrack gave me chills every time it came alive to drive the narrative home; it’s hauntingly beautiful and ethereal, demanding the volume be turned to 11. Jessica Curry, co-director and in-house composer for The Chinese Room, is an incredible talent that possesses a next-level understanding for the emotional impact music can have in video games.

Since Dear Esther’s 2012 re-release, critics and players alike have had mixed feelings. At the time, it was jarring and unconventional for a video game to take away basic player interaction and guide them through a directed story. But the beauty of Dear Esther is that it’s an emotionally powerful story that’s open to the player’s interpretation, despite the scripted ending. It’s a sad story of a man who lost his wife in a tragic accident and how he’s dealt with it. However, by the time the credits started rolling, I was asking more questions about my life and the important people that populate it, rather than this man’s story, no matter how captivating and heartbreaking it may be. I am floored and honored to have experienced Dear Esther—now I need to play it’s spiritual successor, Everyone’s Gone to the Rapture.