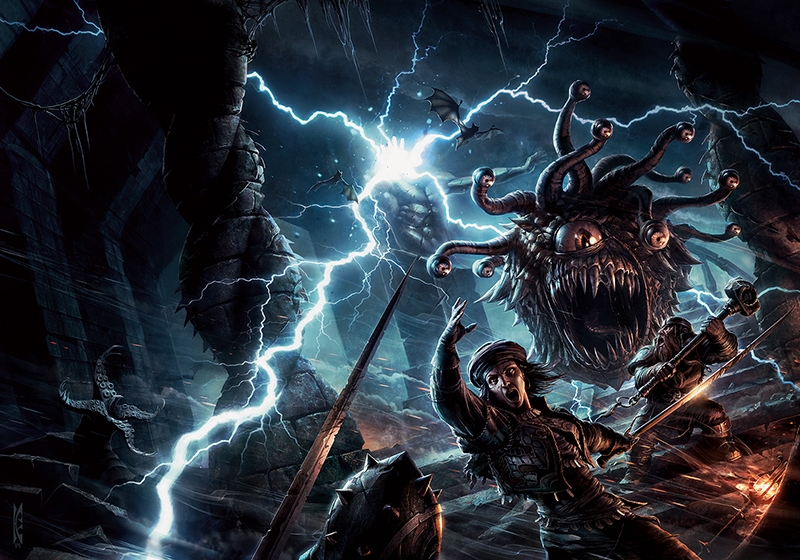 The Monster Manual for Fifth Edition D&D fleshes out some of D&D's most iconic creatures, giving you a brief moment of awe before the Beholder completely wrecks your face. Photo: © 2015 Wizards. All Rights Reserved

In honor of Dungeon Master Appreciation Month, SLUG Magazine is reviewing the new edition of Dungeons & Dragons, one book at a time!

I was about 15 years old. My friends and I weren’t cool. We listened to metal music and liked books and comics about high fantasy and science fiction. During lunch, we would daydream about epic battles and recount our favorite scenes in video games and whatever book series we thought was cool at the time.

Then my friend told me about Dungeons & Dragons. I knew next to nothing about it, but he brought the Monster Manual of 3.5 to our table one day, and together, we pored through the pages.

It was an experience that immediately brought me into the game. We didn’t really understand all the stat blocks at the time—we were mostly looking at the pictures and reading descriptions of fantastical beasts that ranged from clockwork angels to leviathan sea beasts to a whole palette of powerful, intelligent dragons. He convinced us to give the game a shot, so we resolved to meet at his house after school to try it out.

Years later, we’re all still friends, and we still game together when we can make time in our busy schedules. The world seems to have changed so much since those early days. I don’t think any of us would have dreamed that one day metal would be cool, that The Lord of the Rings would be a high-budget movie series and, most of all, that people would be eager to come play D&D with us.

Of the holy trinity of D&D books, the Monster Manual is what gives the game its punch. Its pages are heavy-laden with fantastical beasts, providing a seemingly endless pool of creatures to populate the wild outskirts of the game world. In this way, the Monster Manual is about giving the world a genuine sense of threat to add conflict to a seemingly boundless adventure.

Fifth Edition’s Monster Manual is an incredible expression of this concept, going far deeper than previous editions of the game dared to tread. While 3.5’s stable of creatures was certainly diverse, there were plenty of forgettable faces in the first Monster Manual. Many of the monsters had no illustration and barely any narrative substance to tickle the imagination. Each page was practically overcome by stat tables and ability explanations, leaving only the barest shred for truly exploring the beings contained within.

Fifth Edition allows itself to dwell on each creature, going deep into their ecology, society and even cosmology, explaining their mannerisms with snippets of in-character dialogue as well as anthropological descriptions and summaries. Illustrations of every creature make up the majority of each page, while only particularly complex monsters have to compete with their elaborately detailed combat behaviors and abilities. While I’m sure a few die-hards will take issue with the clearly story-oriented presentation, beneath the veneer of beauty is a robust and much-needed simplification of monster mechanics.

What impressed me most was that iconic beings like Beholders, Orcs and even the Gith were given extended lore treatments that spanned multiple pages and truly seemed to explain why these creatures matter to the world of D&D. The hierarchy of devils is exhaustively explained, its Lawful Evil bureaucracy more distinct and separate from the swirling Chaotic Evil of the demons.

These might not add to the difficulty of combat or the specific abilities of each creature, but what it does add is a sense of backstory to even the most mundane of monsters. Even a scuffle with a roving band of Orcs can connect to the grand scale of that race’s overall struggle for survival. That kind of depth makes for a truly engrossing and exciting campaign.

A powerful monster can serve as a great capstone to a long adventure—the final adversity that sears the memory of your campaign into the minds of your players forever. A good monster, however, needs some serious foreshadowing and a sense of individual character in order to truly be memorable.

That’s why Fifth Edition has taken some of its most imposing creatures and given them an undeniable ambience. Miles away from the Beholder’s lair, people feel like they’re constantly being watched. Near the Green Dragon’s cavern, food spoils and rots while vermin crawl fearlessly through the streets. When you go to take down the Lich, she uses her whole lair in a desperate attempt to annihilate the party. There’s just something cool about the idea of discovering these small signs, knowing they’re pointing to something more.

Major monsters will have ambient effects around their lairs, caused by the intense magic needed to sustain their existence. Some will even have “lair actions” that allow them to use their familiarity with their chosen lair to their advantage. I even enjoy the concept of “legendary actions,” which add to the growing sense of dread and fear that accompany a particularly difficult boss battle by giving them additional actions in combat.

When you’re fighting the boss monster in Fifth Edition, you’re going to know it right away. The atmosphere will change, and the stakes will suddenly get a lot higher. That’s when the real heroics start to happen.

One of the great difficulties of D&D has always been finding creative encounters for first-level characters. There are only so many times that you can fight a tribe of rabid goblins or a bunch of giant spiders before wanting to turn your blade on something more fearsome.

Luckily, Fifth Edition has taken this lesson to heart. While the total range of monsters has definitely shrunk overall, there’s a wide variety of meaningful threats for fledgling adventurers to overcome. Challenge Ratings are a little more forgiving this time around, too, making even more powerful creatures a reasonable challenge with proper planning and minor stat tweaks. You’re still not going to want to run a party of neophytes up against a Tarrasque, but encounters are flexible enough to allow creative Dungeon Masters some wiggle room.

Where Legends Are Born

Your players will never forget that first, desperate battle with an endless zombie horde, or the time they had to throw down with a Gelatinous Cube. There’s just something about these encounters that inspires us and allows our inner heroes to emerge. Some players want to know what happens next in the story they’ve helped to create. Others just want to see what kind of awesome loot awaits them. However, there’s a part of all of us that wants to be able to say that we slew a dragon in an epic struggle with our friends.

Fifth Edition seems to be primed for interesting and flavorful encounters that encourage creative approaches and cool ideas. As a DM, it’s not always easy to keep coming up with exciting battles and meaningful combat, but having this kind of inspirational fuel helps to keep my games alive.

Check out SLUGMag.com next week for Part Three, the final chapter in this epic trilogy. I’ll be covering the Dungeon Master’s Guide and its advice for exploring the infinite possibilities of a cooperatively created world.