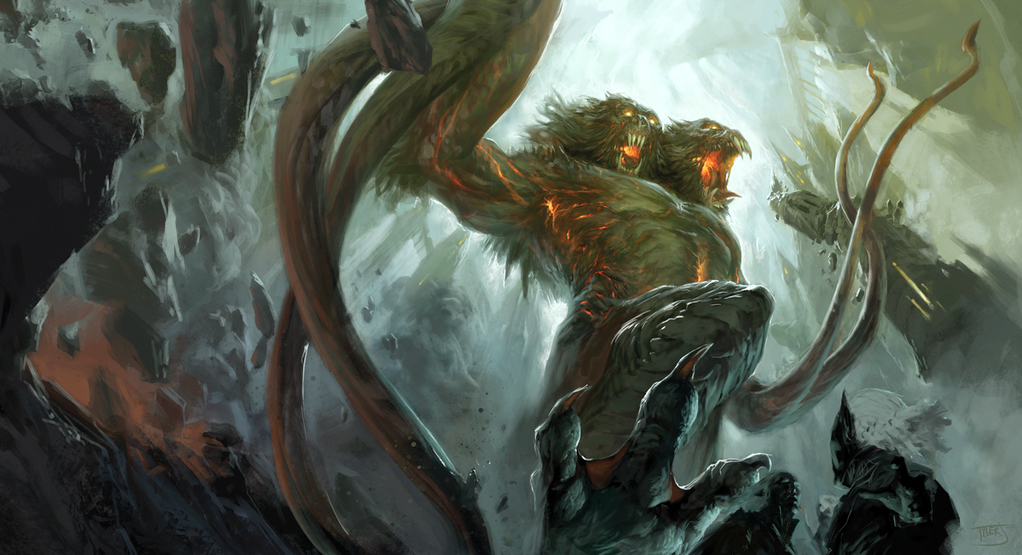 Dungeons & Dragons: Out of the Abyss – Straight Outta Menzoberranzan

Dungeons & Dragons Fifth Edition: Out of the Abyss
Wizards of the Coast/Green Ronin Publishing

Out of the Abyss

Adventuring, on the whole, is a pretty good gig. You raid the occasional dungeon, fight off a few nasties, then spend all your ill-gotten gains at the local tavern, boasting about how you saved the whole town from certain annihilation. Life is good, right?

But maybe you’re a different kind of adventurer. Perhaps you took a request from the dangerous sort of mysterious stranger, or you found yourself on the wrong end of a Drow’s blade. Maybe you even delved a little too greedily and too deep. No matter the cause, you find yourself miles beneath the surface of the world, scrabbling to survive in the alien, inhospitable landscape of The Underdark.

Yet, The Underdark is more than just an endless murder-dungeon crafted by a cabal of sadistic Dungeon Masters to torment their players. This warren of winding tunnels and immense caverns is an intriguing and strangely beautiful place—the potential for adventure is virtually limitless for those with the fortitude and savvy to keep themselves out of harm’s way. It’s an unforgettable place that hides many secrets, and some of those secrets threaten far more than a single hamlet out in the middle of nowhere.

Some of those secrets threaten to unravel the very fabric of the entire Material Plane.

Before we go any further down the rabbit hole, this is as good a time as any to mention that Out of the Abyss is a simply exquisite adventure module. It’s more like a comprehensive guidebook to the known reaches of The Underdark, but with an incredible, cinematic story for players to get engrossed in. Few pre-made adventures come even close to this delicate balance of story and choice-directed gameplay, and fewer still can do so with an ever-present sense of danger and urgency.

Out of the Abyss drops the party right into a worst-case scenario, forcing them to get creative and come up with their own solutions to challenges right from the start. As prisoners of the Drow, the party must devise a means of escape from their subterranean prison, using an ample array of tools and NPC allies to aid them in their plan. From there on out, the party is chased by a whole platoon of Drow throughout The Underdark, hoping to find a way back to the surface before they are snatched up and carried back to a life of inevitable slavery.

All along the way, there are tons of random encounters, each of them feeling both fleshed-out and remarkably customizable. Combat, while always an option, never seems like it’s inevitable, but even the most innocuous-seeming encounter can hide a wealth of secret and unexpected dangers. This is part of what gives Out of the Abyss its incredible strength as an adventure—even if one were to roll the same encounter twice in a row, there’s so many opportunities to put a new spin on things that clever Dungeon Masters will never feel like they’ve run out of options.

Honestly, just using Chapter 2 to run a low-level Underdark campaign would be fun on its own. Out of the Abyss contains a comprehensive guide to the flora and fauna of The Underdark, along with a set of maps and travel rules that allow for some significant side-tracking on the part of the players. Nevertheless, there’s always a way to rope the players back on track, and while they can spend entire game sessions just plumbing the unknown depths of this strange and alien place, there’s almost always some kind of hook that can bring them back to the main story, if one should desire such a thing.

Along with the random encounters peppered throughout the players’ journey, Out of the Abyss features a substantial set of more involved pre-made encounters to spice things up whenever there’s a lull. Each NPC feels like a fully realized character with memorable quirks and a legitimate place in the complex, dangerous ecosystem of The Underdark. Even as Drow scouts nip at their heels, players will often want to stop and experience the weird happenings that crop up in between adventures, providing a sense of meaning to even the most random expeditions.

That’s to say nothing of the adventure itself, which leads through some of the most famous locations in The Underdark—if such places can be said to be famous. Many players will remember Menzoberranzan, the City of Spiders, but even lesser-known areas such as Blingdenstone and Gracklstugh are fully developed and ready to be explored. I don’t want to give anything away, but as Out of the Abyss continues, the players will slowly uncover a vast and malign influence powerful enough to warp even The Underdark with its insidious evil. This adventure module alone can take a party from level 1 to level 15, so strap in for a long, intriguing ride.

Lurking In The Dark Even beyond the awesome random tables and exciting main storyline, Out of the Abyss finds an occasion to dust off some of the overlooked rule sets contained in the Dungeon Master’s Guide, shining a light on options and ideas previously only postulated about. For example, the optional madness rules get a chance to shine, and while exhaustion rules aren’t exactly what you’d call “optional,” cracking open this guide will help Dungeon Masters of all skill levels discover their full utility and potential.

Yet, the mere inclusion of these mechanics is not what makes them so special in the context of Out of the Abyss. What really gives them their impact is that they are so expertly woven into the sense of urgency that underlies every moment of the adventure. It’s not enough to simply evade your pursuers—you’ve also got to eat and get some decent rest somewhere in there, and The Underdark is not kind to those who simply pick a direction and start marching. This creates a very real tension in the module between operating at peak combat performance and avoiding the enemies on your trail. Maintaining a proper balance of exhaustion and distance from the party’s pursuers takes a certain degree of cunning and forethought—laying traps is practically essential to survival, and covering your tracks can buy the party precious days to forage for food.

It’s also surprising how madness works its way into Out of the Abyss, never feeling intrusive, but always offering players opportunities to experience some serious character growth through gameplay. Each source of psychological stress is different, and produces a myriad of strange effects that can drastically alter the way your character views and interacts with the world. The players are never punished for failing to roleplay their madness, but the Inspiration system still rewards dedicated players who are willing to make the story more interesting with their insanity-driven decisions.

Ultimately, it feels like Out of the Abyss is maximizing the potential of Dungeons & Dragons without burdening it with a million new sub-systems that bog down the gameplay. It’s easy enough to track the essentials, and instead of feeling nit-picky, these details add a much-needed layer of desperation to the campaign without ever feeling intrusive or tacked-on.

At The Sound of The Demon Bell Of course, no adventure module would feel complete without a whole new complement of enemies to slay. Fortunately, Out of the Abyss focuses on filling out the low and high ends of the challenge scale, offering new templates for existing creatures and a host of abyssal foes for high-level adventures. While this list wasn’t quite as extensive or meticulously illustrated as the bestiary found at the end of Princes of the Apocalypse, many of The Underdark’s most iconic denizens are already lurking in the pages of the Monster Manual. That said, it seems like a lot more effort went into making enemies memorable by endowing them with peculiar characteristics and personality instead of trying to build their character into a stat block.

The few unique enemies who do show up in the little mini-bestiary at the end of Out of The Abyss  seem to be demonstrating design ideas for crafting iconic monsters of one’s own, taking some of the creature customization options from the Dungeon Master’s Guide and showing how well they work, even when turned to their logical extremes.

The Demon Lords, however, more than make up for a little lack of variety in new mid-level threats. Weighing in at an average challenge rating of 23, these dastardly demons add a huge amount of variety to epic-level parties, and each of the eight could easily headline their own spin-off adventures. The mid-20s challenge rating range needed the most help out of all areas of the Monster Manual, and it’s nice to see creatures with such developed personalities occupying these formidable places on the difficulty scale. As if all the rest of Out of the Abyss weren’t simply delightful on its own, this book is also full to bursting with incredible art. Whether you love yourself some old-school maps or just want to gaze at more of the beautiful, atmospheric digital art style that typified the core Dungeons & Dragons Fifth Edition books, it’s all here. Many of the important NPCs have excellently illustrated faces that recall the work of Tony DiTerlizzi in their whimsical, fairy tale–esque presentation, giving the players something to connect with beyond just a physical description.

However, there’s something aesthetically present in Out of the Abyss that exists somewhere between the top-notch presentation and excellent mechanics: There’s a real, honest-to-goodness story here. This beautiful synthesis of creative world-building and novel character development gives The Underdark an offbeat, almost manic atmosphere that I had never really encountered before, making it feel truly distinct from the surface world in its peculiar madness. While it never loses its sense of danger and doom, the developers behind Out of the Abyss seem to have a good sense of humor about the darkest reaches of their world.

In a sense, I’m reminded of Spiderweb Software‘s excellent Avernum series, which played serious themes of survival against a dry silliness that, for some reason, made the whole subterranean world feel a lot more real. It’s one thing to be surrounded by a constant layer of gloom and darkness, but Out of the Abyss actually seems to care about The Underdark’s weird side, too. It’s a little touch, but it makes a world of difference.

Where Hope and Daylight Die Out of the Abyss is, without a doubt, one of the best adventure modules to be released for D&D in over a decade. It’s more than just a well-crafted adventure—it’s a proving ground for some of Dungeons & Dragons Fifth Edition‘s best ideas. This module dares to venture into the furthest reaches of this edition, drawing from a vast pool of mechanics that uniquely fit its storytelling pace and style. This is a challenging adventure—both to run and to play—but few other pre-made adventures in the history of Dungeons & Dragons have the kind of rewarding immersion that can be found here.

Dungeon Masters of the world, you absolutely need this book in your arsenal. Out of the Abyss is just the right kind of adventure to break you out of a slump or give you a whole slew of new ideas to implement into your own material. Once you hear your party’s just-so-crazy-it-might-work prison escape plan, you’ll be hooked, too.

You can pick up Out of the Abyss starting today at select hobby shops across the valley, or you can wait until the general release on Sep. 15. Either way, get your party together and roll up some new characters—this one’s worth it.