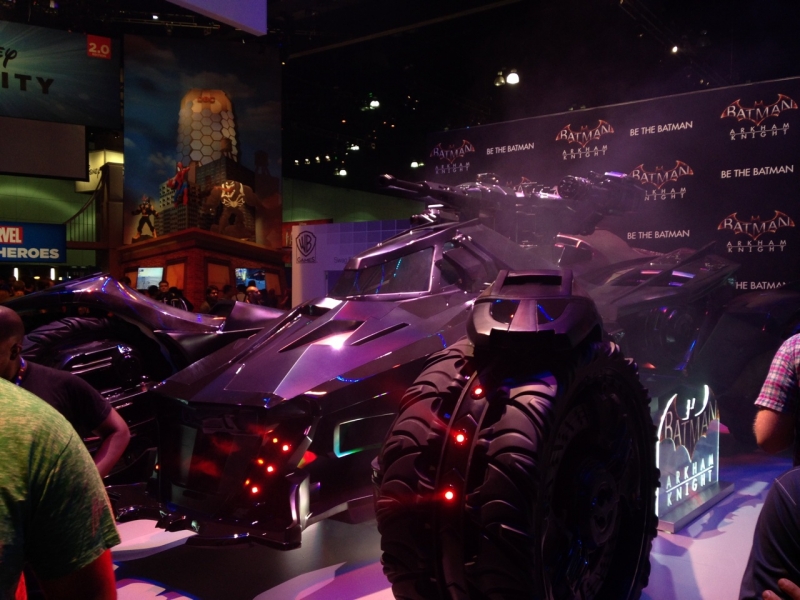 During my stops throughout the convention, it was interesting to see which gaming trends were on their way out, which ones were being salvaged for their next-gen potential, and which ones will shape the way we play games in the near future. As a final sendoff for E3 2014, here are some things to look forward to this year.

It’s Time to Buy a Wii U
For the past few months, Nintendo’s home console hasn’t been selling very well. From the looks of Nintendo’s fall lineup, however, it appears that things are about to turn around for them. One thing that has been consistent with Nintendo’s development is that the company values creativity and ingenuity within the gaming world. Even when they’ve taken a gamble on something that doesn’t quite pan out—hello, Virtual Boy—they always manage to bounce back and develop content that causes even the most hardened gamer to pause and remember the day they brought home their very first NES. Based on their press conference and their floor showing, they’re definitely playing to their strengths by adapting their popular characters to meet the needs of fickle gamers everywhere.

If you haven’t done so already, check out our Nintendo coverage for the many reasons why this upcoming year might just put the Wii U back into circulation.

Unleash Your God Complex
It’s unclear whether or not the team at Notch Development had any idea what Minecraft would do to the world of video games. Since the creation of Minecraft, developers have run off with the idea of allowing players free reign to create whatever environment that they can think of. Games like Microsoft’s Project Spark and Sony Online Entertainment’s Landmark have taken that idea one step further by incorporating basic gameplay mechanics into the creation process. In Project Spark, it’s possible to craft an entire world, populate it with events and enemies, then take a player through it and see how long he/she survives.Landmark actually looks to be taking this unbridled creativity and placing it into an MMO context. I was able to sit with Terry Michaels, the senior producer of both Landmark and EverQuest Next, as he showed me a few of the exciting things that Landmark lets players do.

Since Landmark uses the same technology as EverQuest, the eventual goal is to allow players to participate in a constantly evolving online community. After a player claims a piece of the world, he/she is able to build quite literally anything—and it’s easy too. Michaels demonstrated the game’s construction mechanic, which allows the player to create and manipulate cubes which are then used to build anything from small houses to gigantic sculptures. When he turned the controls over to me, I was amazed at how easy it was to pick up and play—it immediately felt like I had a limitless supply of Legos that could be molded to whatever shape or size that I needed. Eventually, Michaels is planning on making AI tools available to players so they’ll be able to populate their world with AI characters—both friendly and hostile. Essentially, this kind of creative power means that all of those gamers who have a great idea for an RPG kicking around in their heads will have the opportunity to bring that idea to life. “We like to think of Landmark as walking through other people’s imagination,” Michaels says.

The Future of Multiplayer
For the past decade, the term “multiplayer” has become fairly one-dimensional. As the new generation of consoles starts spreading their wings, however, we’re starting to see all kinds of innovative ways to get together with some buddies and blow shit up. In addition to the vast, interactive world-building that we’re starting to see, the action genre has thrown some fantastic innovation at us this year with games like Evolve, Fable: Legends, and Skyforge. I won’t spend any more time gushing about how much I loved Evolve, but I thought it was interesting that Fable: Legends is adopting a similar style. Instead of pitting four hunters against a hulking monster, Legends pits four fantasy-esque warriors against one conniving dungeon master. The heroes try to make their way through a dungeon while the villain summons monsters and builds traps to separate and kill them. Not only was this a blast to experiment with, it hearkened back to the very special place that Bullfrog’s Dungeon Keeper holds in my heart.

Skyforge has added the ability for characters to become god-like beings as they progress through their vast, MMORPG world—a concept that I have yet to see in my years as a gamer. The game has the skeleton of a traditional MMORPG, but there was something about the absolute freedom your character has in the vast universe of Skyforge that I found fascinating. For example, your character can switch classes on the fly—which I thought would bug me until I tried it—so you have the freedom to grind your character into a jack-of-all-trades or spend time getting him/her to become the best Cryomancer in the galaxy. I also liked the mixture of science fiction and fantasy within the gameplay—just another aspect that the developers threw in so the player can really make this game their own. It’s still in early development but, based on the plans that the developers have for the game’s future, it’s shaping up to be a pretty ambitious title.

E3 2014 was home to many mind-shattering surprises in the world of gaming. It always makes me happy to have my expectations completely blown away as I try to keep my bearings amid the cyclonic ebb and flow of E3. For those of you who may have been worried, I’m happy to report that there are still plenty of gutsy developers who are doing great, innovative things with video games, and even more gutsy gamers who are clamoring for content that nobody has seen before.