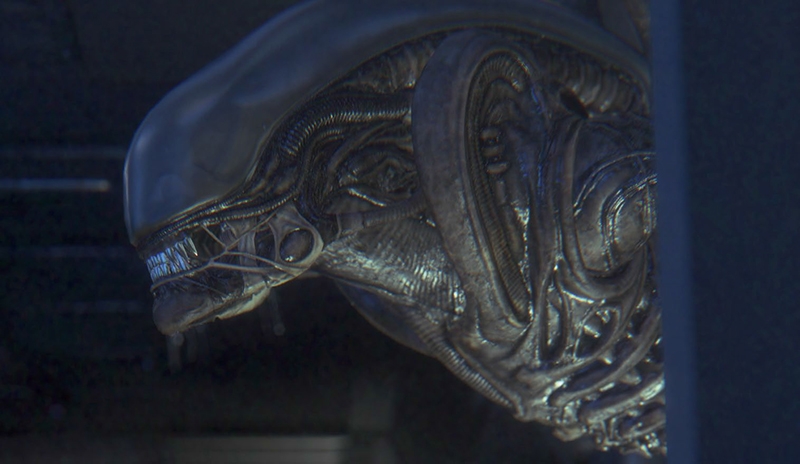 Alien: Isolation
One of the best indicators that a game is going to be worth a damn in the coming year is whether or not it makes an impression. After playing video games for eight hours at a time, the games that feel too generic don’t linger in the subconscious. However, there are moments when your brain gets zapped to attention because a developer dropped something totally new in you’re lap. Though there were many games this year that surprised me with their innovation, these were the ones that stuck with me over the course of E3.
Alien: Isolation
Creative Assembly/Sega
Available on: Xbox One, Xbox 360, PS4, PS3, PC
Street: 10.07.14
When I think of the survival horror genre, I’m always jerked into the world of Resident Evil and Silent Hill. Though there is absolutely nothing wrong with those games, it never really occurred to me how awesome a survival horror game set in space would be—let alone one that finds our protagonist hunted by a sleek, ravenous Xenomorph. In Alien: Isolation, the player takes control of Ellen Ripley’s daughter, Amanda, who sets out on an ill-advised adventure to find out what happened to her mother after the disappearance of her ship, the Nostromo. The game relies heavily on stealth, scavenging and creative thinking to outwit the physically dominating alien presence that stalks around every dimly-lit corridor. In one scene, after hiding out in a locker, the player is prompted to press a button that makes Amanda hold her breath—yes, even breathing too loud means certain, bloody death in this game.
While making your way through an authentically-rendered medical installation, the Xenomorph is not your only threat. There are human survivors, driven mad by isolation and fear, along with synthetic humans who will attempt to beat Amanda to death if they find her. One of the most chilling scenes involved a synthetic who had been set ablaze by the player’s flamethrower, only to keep moving towards our hero. It’s a situation like this when quick reflexes and MacGyver-like resourcefulness are your only hope.
As I remember the many games that have adapted the Alien universe to the video game console, they’ve all been pretty much the same—a ‘roided out space marine gunning down hordes of slimy Xenomorphs. What they’ve lacked, and what it looks like Alien: Isolation has in spades, is the original feeling of helplessness and terror that the first Alien film brought to life.
Middle Earth: Shadow of Mordor
Monolith/Warner Bros. Interactive
Available on: Xbox One, Xbox 360, PS4, PS3, PC
Street: 10.07.14
Of all the titles that I saw at E3, this one took me by surprise the most. I had heard of this game before heading to the convention, and since I’m a Tolkien nerd, I was moderately excited. When I took my seat at the Monolith/Warner Bros. presentation of the upcoming title, I was expecting something along the lines of 2004’s Lord of the Rings: The Third Age—a game that followed the exploits of a non-canonical character

—as he hacked and slashed his way through legions of orcs.

How very wrong I was.
Shadow of Mordor finds the player taking control of a man—okay, he kind of looks like Viggo Mortensen—who was stationed at the Black Gate of Mordor when Sauron finally gained enough strength to begin building his armies. After some unknown, but tragic, event, our hero was killed and brought back to life with what appears to be a Ringwraith inside of him. It’s a plot point that the developers kept under wraps, but it allows the character to do all kinds of nifty, wraith-like things—such as sneaking up behind enemies and slowing down time.
The game’s combat mechanic looks a lot like the one that the Batman Arkham games used to such great effect.  It’s a blast to pound criminals as the Dark Knight, but can you imagine that same fluidity coming from a character who wields two blades? If you’re imagining a situation in which several beheadings take place, you’re imagining correctly. The combat is frenetic and brutal, giving a slightly dark edge to the Middle Earth that Peter Jackson brought to life in his films.
Though the stealthy abilities and streamlined combat were awesome to behold, the real fun is had by pitting the Orcs against each other. One of the character’s main abilities is to dominate the minds of others. Once you deliver a sound beating to a chieftain, you can bend his mind to your will. This comes in handy, since you can send an Orc on a mission to upset the balance within his current tribe. It’s something that I’ve never seen in a game before, and the thought of experimenting with this new gameplay mechanic has me counting the days until Shadow of Mordor finally comes out.
The Evil Within
Tango/Bethesda
Available on: Xbox One, Xbox 360, PS4, PS3, PC
Street: 10.21.14
For folks who bought a Nintendo GameCube just to play Resident Evil 4, The Evil Within will both delight and disgust you. The game is helmed by Shinji Mikami, the creator of Resident Evil, and it looks like the dude has been struggling with some serious night terrors. As soon as I stepped into the poorly lit demo area and slipped on my headphones, I knew that I was getting into trouble.
The game uses what was great about Resident Evil 4, and throws in a smattering of disfigured enemies that have the ability to jump up at you even if you’ve blown their heads off.  The only way to keep a bad guy down is to light him on fire with matches, which are another resource that you’ll find runs out at exactly the wrong moment.
During my playthrough, I walked my character into a dilapidated mansion that was so grimly detailed that I could swear the scent of dust and rotting books hung in the air around me. The first beast that I met was vaguely zombie-like, she had a few painful-looking nails shoved through her head and torso. Occasionally, an androgynous figure appears and chases you through the halls—often into greater danger. We were told that there were a few monsters that straight up can’t be killed, and this was one of them. When encountering one of these beasts, the only thing you can do is run—and there’s something deeply unsettling about turning your back on something that other video games have trained you to shoot at.
After meeting my grisly end by getting pulled into a meat-grinder that was concealed behind an innocent-looking door, I reflected on my experience. First, the game looks amazing. The environmental textures were painstaking, and the way light and shadow play off of one another makes for a gut-wrenching amount of suspense. My only beef with the playthrough was the fact that I didn’t know anything about the story—which is a necessity for a survival-horror game to work. Knowing that the developers don’t want to reveal too much, it’s easy to overlook—I’ll just wait until it comes out to delve a bit deeper into what looks like a truly great horror game.
When most games that are based on movies tend to—how can I put this delicately—suck complete ass, it’s refreshing to see someone come along and truly realize the golden egg has been given to them. It’s good to see that properties like The Lord of the Rings and Alien are still spawning some great entertainment. Let’s hear it for Bethesda, who are venturing out of their comfort zone by unleashing one of the most unsettling games in recent memory upon the world. If I could pin down the common thread that unites these three games, it’s that each of them involve some type of risk—some huge aspect of their idea could have totally flopped. Based on these previews, however, I think we’ve got some serious games hitting shelves this fall.
Photos: